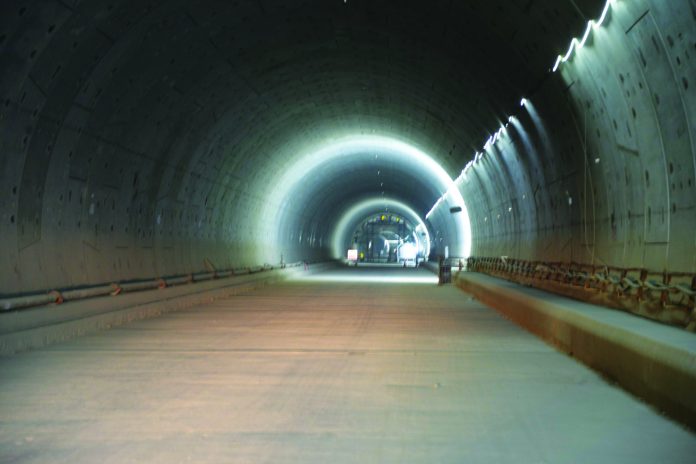 Another mega infrastructure – Bangabandhu Tunnel awaits formal inauguration, which marks the continuous development of the country. The Tunne,l under the Karnaphuli River, is going to opened by next month.

At the same time the elevated expressway, almost complete now, is also waiting to be opened soon.

The General Secretary of ruling Awami League and Minister of Road Transport and Bridges, Obaidul Quader, made the disclosures at the opening ceremony of Dhaka-Ashulia Elevated Expressway construction work on Saturday.

Quader said, “This elevated expressway is another milestone in the continuous development of our road department. The construction of Padma Bridge has been completed. The benefit of this bridge is not only for the people of 21 districts, but for the whole of Bangladesh. Earlier, the Prime Minister inaugurated 100 bridges to the nation as a gift. These are making communication and business easier.”

“The country’s first tunnel under the Karnaphuli River will be opened at the end of next December or the first part of January,” he added.

The minister has also said, “The construction of the southern part of the Karnaphuli Bangabandhu Sheikh Mujibur Rahman tunnel has been completed. If the tunnel is opened, 17260 vehicles will be able to move daily and 76 lakh vehicles per year. Extensive development are being made in the communication system of Chittagong, Bandarban, Cox’s Bazar districts centering the tunnel. Besides, the initiative to build new industries and factories with the benefit of communication system has already started.”

“We have expanded road communication network across Bangladesh from hills to plains. There was no border road in our country. Army is building our border road. This is also a new addition,” the minister added.

The tunnel is being constructed under the river Karnaphuli at a cost of Tk 10,000 crores. It is the first tunnel in South Asia to be built under a river. The government took the tunnel project to connect the two banks of Karnaphuli to build ‘One City Two Town’ on the model of Shanghai in China.

The length of the main tunnel with two tubes is 3.32 km. The length of the tunnel tube is 2.45 kilometers and the inner diameter is 10.80 meters. On February 24, 2019, Prime Minister Sheikh Hasina inaugurated the boring work of the first tunnel tube.

Road Transport and Bridges Minister Obaidul Quader inaugurated the work of the second tube on December 12, 2020. EXIM Bank of China is financing this project. This bank is giving Tk 5913 crores at an interest rate of 2 percent. Bangladesh government is providing the remaining Tk 4461 crore.