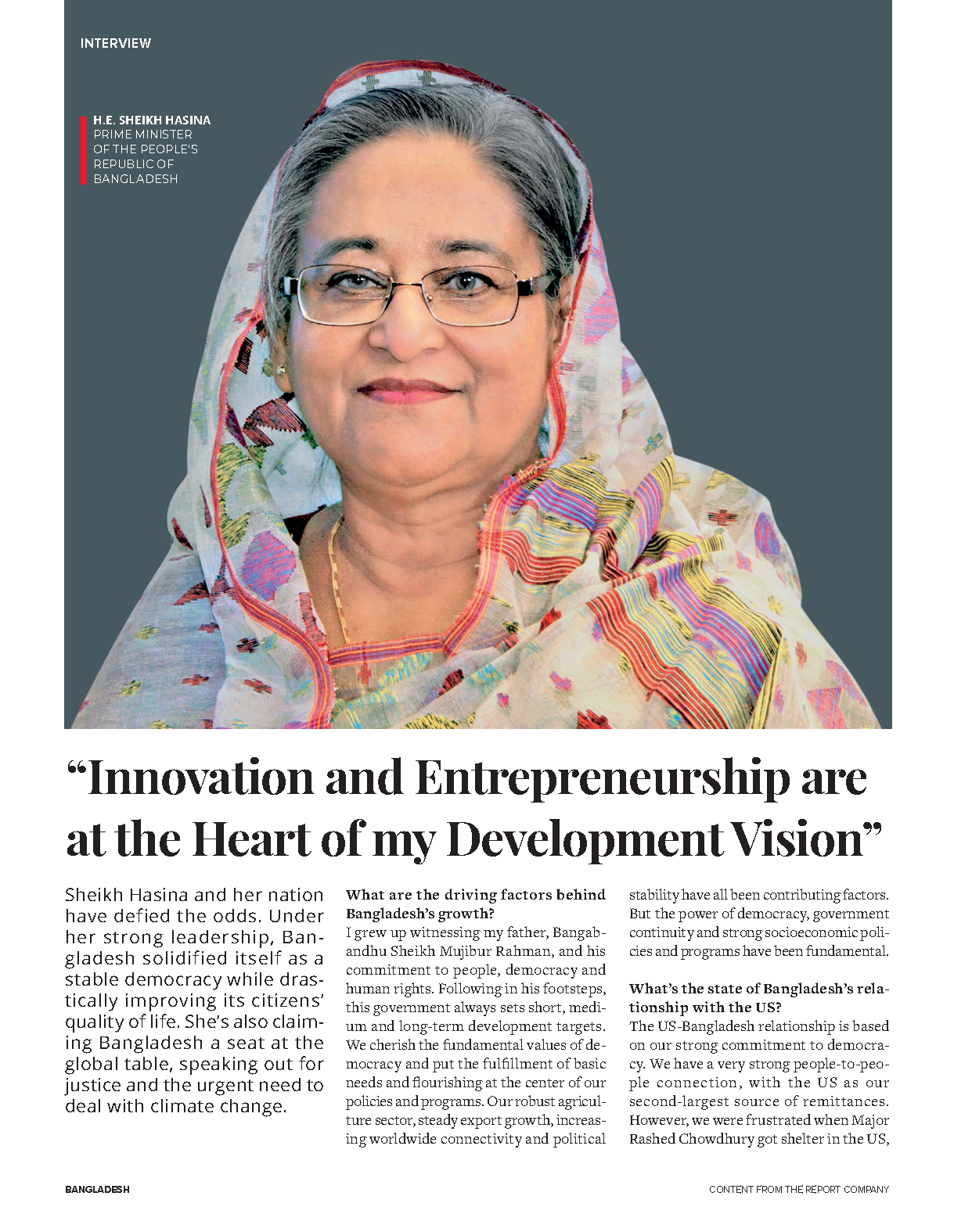 Bangladesh is a quiet success story. Since becoming independent in 1971, it has steadily progressed from the second-poorest country in the world to being proclaimed “a model for poverty reduction” by the World Bank, all while remaining democratic and committed to protecting human rights and the environment. From 2010 to 2020, Bangladesh achieved the world’s highest cumulative GDP growth. In a decade and a half, it lifted more than 25 million people out of poverty. Last year, the UN confirmed that Bangladesh would graduate from the least developed countries category by 2026, making it just one of a handful of countries to do so. But the nation’s ambitions remain as strong as its momentum. 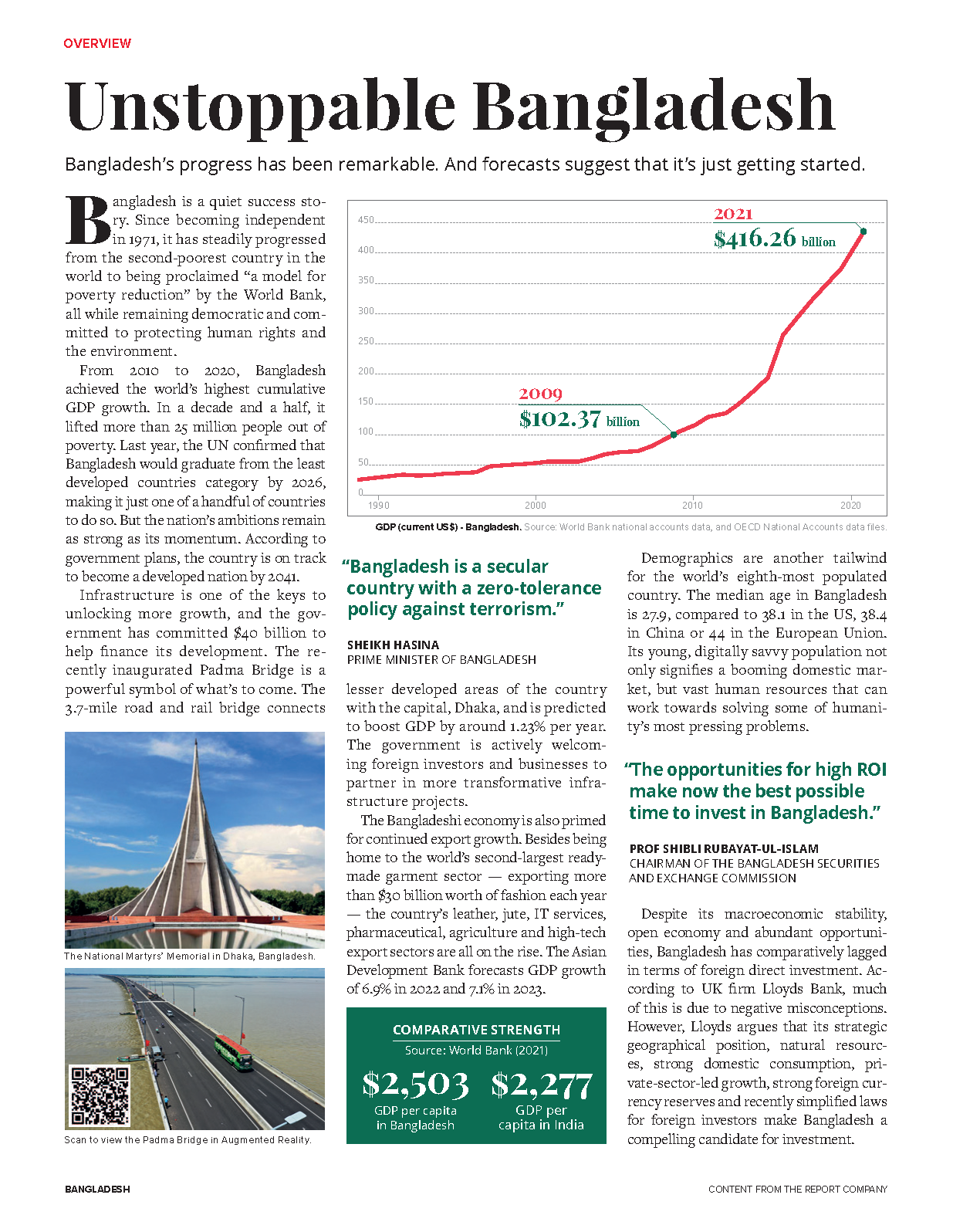 According to government plans, the country is on track to become a developed nation by 2041. Infrastructure is one of the keys to unlocking more growth, and the government has committed $40 billion to help finance its development. The recently inaugurated Padma Bridge is a powerful symbol of what’s to come. The 3.7-mile road and rail bridge connects lesser developed areas of the country with the capital, Dhaka, and is predicted to boost GDP by around 1.23% per year.

The government is actively welcoming foreign investors and businesses to partner in more transformative infrastructure projects. The Bangladeshi economy is also primed for continued export growth. Besides being home to the world’s second-largest readymade garment sector — exporting more than $30 billion worth of fashion each year — the country’s leather, jute, IT services, pharmaceutical, agriculture and high-tech export sectors are all on the rise. The Asian Development Bank forecasts GDP growth of 6.9% in 2022 and 7.1% in 2023.

“Bangladesh is a secular country with a zero-tolerance policy against terrorism.”

Demographics are another tailwind for the world’s eighth-most populated country. The median age in Bangladesh is 27.9, compared to 38.1 in the US, 38.4 in China or 44 in the European Union.
Its young, digitally savvy population not only signifies a booming domestic market, but vast human resources that can work towards solving some of humanity’s most pressing problems.

“The opportunities for high ROI make now the best possible time to invest in Bangladesh.”

Despite its macroeconomic stability, open economy and abundant opportunities, Bangladesh has comparatively lagged in terms of foreign direct investment. According to UK firm Lloyds Bank, much of this is due to negative misconceptions.
However, Lloyds argues that its strategic geographical position, natural resources, strong domestic consumption, private-sector-led growth, strong foreign currency reserves and recently simplified laws for foreign investors make Bangladesh a compelling candidate for investment. 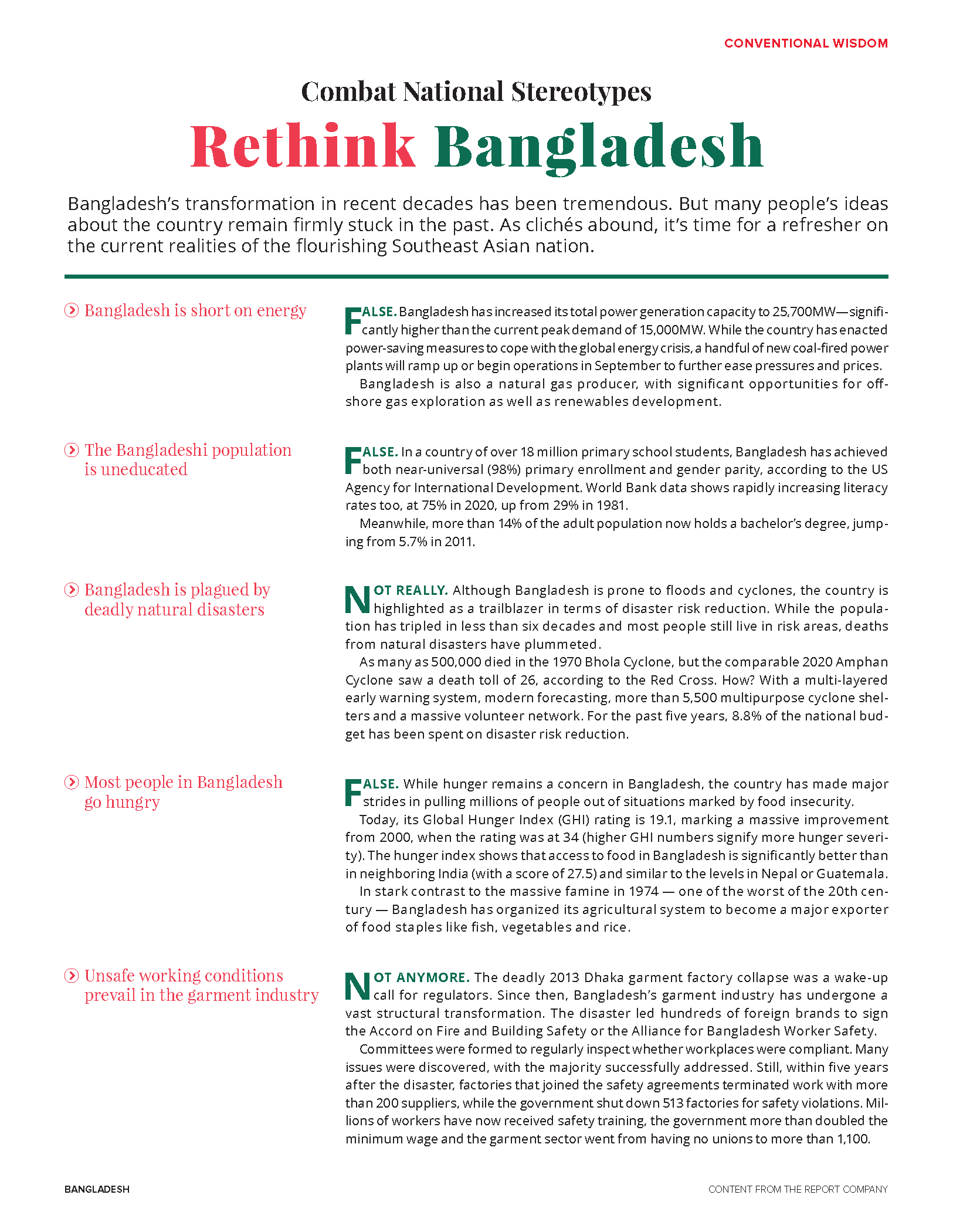 Bangladesh’s transformation in recent decades has been tremendous. But many people’s ideas about the country remain frmly stuck in the past. As clichés abound, it’s time for a refresher on the current realities of the fourishing Southeast Asian nation

Bangladesh is short on energy

FALSE. Bangladesh has increased its total power generation capacity to 25,700MW—signifcantly higher than the current peak demand of 15,000MW. While the country has enacted
power-saving measures to cope with the global energy crisis, a handful of new coal-fred power
plants will ramp up or begin operations in September to further ease pressures and prices.
Bangladesh is also a natural gas producer, with signifcant opportunities for ofshore gas exploration as well as renewables development.

The Bangladeshi population is uneducated

FALSE.In a country of over 18 million primary school students, Bangladesh has achieved both near-universal (98%) primary enrollment and gender parity, according to the US Agency for International Development. World Bank data shows rapidly increasing literacy rates too, at 75% in 2020, up from 29% in 1981. Meanwhile, more than 14% of the adult population now holds a bachelor’s degree, jumping from 5.7% in 2011.

NOT REALLY. Although Bangladesh is prone to foods and cyclones, the country is
highlighted as a trailblazer in terms of disaster risk reduction. While the population has tripled in less than six decades and most people still live in risk areas, deaths
from natural disasters have plummeted.
As many as 500,000 died in the 1970 Bhola Cyclone, but the comparable 2020 Amphan Cyclone saw a death toll of 26, according to the Red Cross. How? With a multi-layered early warning system, modern forecasting, more than 5,500 multipurpose cyclone shelters and a massive volunteer network. For the past fve years, 8.8% of the national budget has been spent on disaster risk reduction.

Most people in Bangladesh go hungry

FALSE. While hunger remains a concern in Bangladesh, the country has made major strides in pulling millions of people out of situations marked by food insecurity.
Today, its Global Hunger Index (GHI) rating is 19.1, marking a massive improvement from 2000, when the rating was at 34 (higher GHI numbers signify more hunger severity). The hunger index shows that access to food in Bangladesh is signifcantly better than in neighboring India (with a score of 27.5) and similar to the levels in Nepal or Guatemala. In stark contrast to the massive famine in 1974 — one of the worst of the 20th century —Bangladesh has organized its agricultural system to become a major exporter of food staples like fsh, vegetables and rice.

NOT ANYMORE. The deadly 2013 Dhaka garment factory collapse was a wake-up call for regulators. Since then, Bangladesh’s garment industry has undergone a vast structural transformation. The disaster led hundreds of foreign brands to sign the Accord on Fire and Building Safety or the Alliance for Bangladesh Worker Safety.

Committees were formed to regularly inspect whether workplaces were compliant. Many issues were discovered, with the majority successfully addressed. Still, within fve years after the disaster, factories that joined the safety agreements terminated work with more than 200 suppliers, while the government shut down 513 factories for safety violations. Millions of workers have now received safety training, the government more than doubled the minimum wage and the garment sector went from having no unions to more than 1,100.

“Innovation and Entrepreneurship are
at the Heart of my Development Vision”

Sheikh Hasina and her nation have defied the odds. Under her strong leadership, Bangladesh solidified itself as a stable democracy while drastically improving its citizens’ quality of life. She’s also claiming Bangladesh a seat at the global table, speaking out for justice and the urgent need to deal with climate change.

What are the driving factors behind Bangladesh’s growth?
I grew up witnessing my father, Bangabandhu Sheikh Mujibur Rahman, and his commitment to people, democracy and human rights. Following in his footsteps, this government always sets short, medium and long-term development targets. We cherish the fundamental values of democracy and put the fulfillment of basic needs and flourishing at the center of our policies and programs. Our robust agriculture sector, steady export growth, increasing worldwide connectivity and political stability have all been contributing factors. But the power of democracy, government continuity and strong socioeconomic policies and programs have been fundamental.

What’s the state of Bangladesh’s relationship with the US?
The US-Bangladesh relationship is based on our strong commitment to democracy. We have a very strong people-to-people connection, with the US as our second-largest source of remittances. However, we were frustrated when Major Rashed Chowdhury got shelter in the US, who is convicted of the barbaric killing of our Father of the Nation along with his 18 family members in 1975. Both countries attach utmost importance to the norms of democratic principles and respect for human rights. Hence, we expect his immediate extradition. Bangladesh recognizes the US as a strategic partner and, given our geographic location, I believe the US also considers Bangladesh as a country of strategic importance. We are committed to working on issues of mutual interest to take the existing bilateral relations to the next level.

Which policies have been the most successful in combatting poverty?
My father started social safety net programs immediately after our independence. He allocated lands to the landless, homes for the homeless, free education, and free medical treatments for people living under subsistence levels. Guided by his principles, we focused on achieving inclusive growth, particularly empowering the people living under the poverty line. 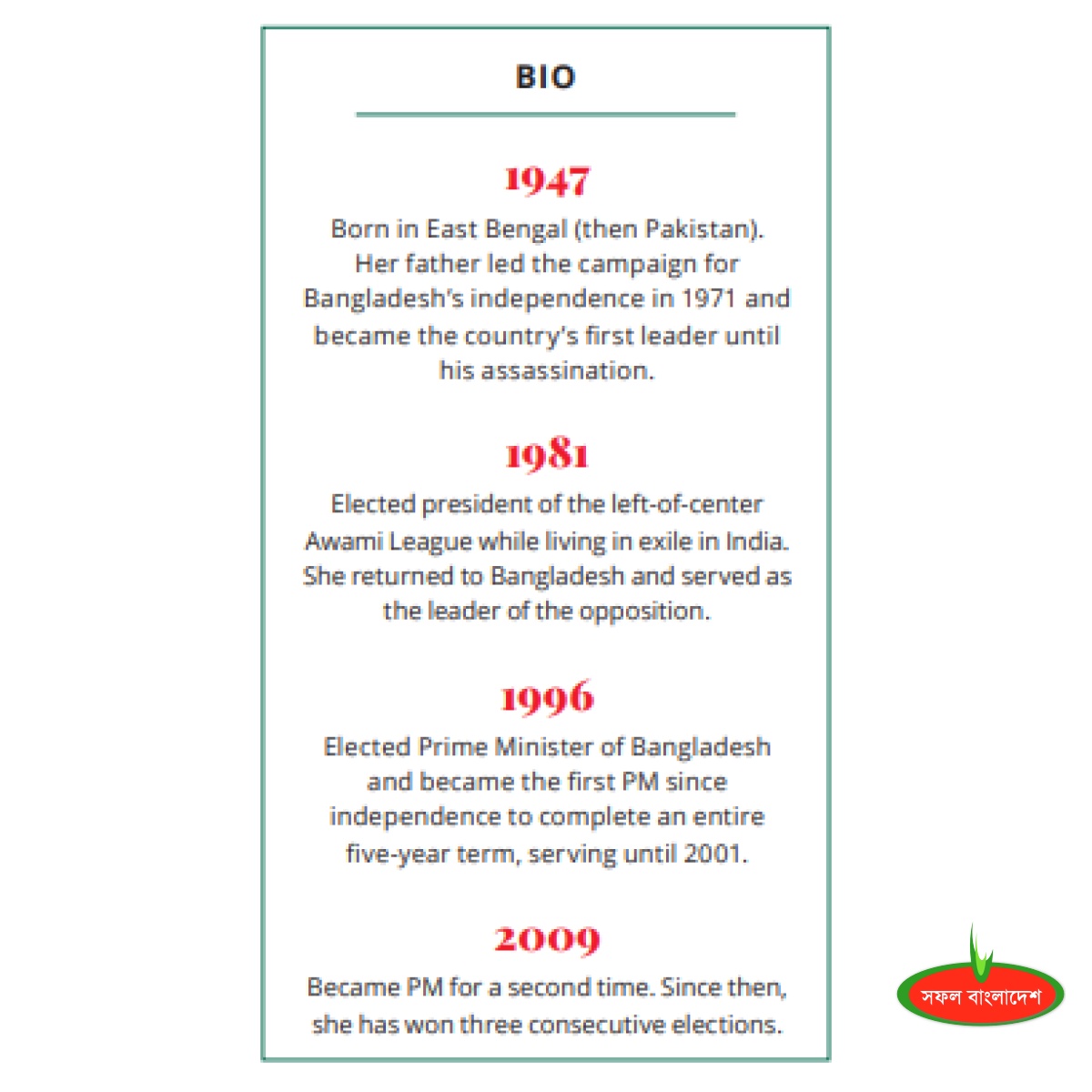 We’ve had remarkable success in improving literacy, life expectancy, food production, water and sanitation, and reducing infant and maternal mortality rates. We are investing heavily to improve human capital in our less advantaged segment to lift people out of poverty and empower them to emerge as real economic agents. Policies around the digitization of the economy, mechanization of agriculture and promotion of agro-based industries have also facilitated our economy’s structural transformation for inclusive economic growth and poverty reduction.

“Had it not been impacted by climate change, our GDP could have grown at the rate of 10% plus for decades.”

How do you think about infrastructure?
We are not only concerned about our own peoples’ comfort, but have extended our attention to building a prosperous South Asia by establishing air, rail, road, inland water, and maritime connectivity with the neighboring countries and the greater Indian and the Pacific Ocean regions. The projects, which we evaluate for feasibility, environmental and social aspects, also enhance our business ecosystem.

What about investment in infrastructure or otherwise?
Innovation and entrepreneurship are at the heart of my development vision for my country. We promote free market enterprises and want entrepreneurs to make Bangladesh their home turf. We have a very liberal tax policy, and we lower corporate taxes and other fees to generate generous public goods. We have a number of mega infrastructure development projects, which will be opened gradually. We offer investment opportunities in any sector without a cap on the amount or percentage of equity. Our law ensures complete protection for foreign investors. The first private investment in the power sector was from the US (AES Corporation). In our energy sector, the US company Chevron has been our longest-serving partner.

How did Bangladesh handle the COVID-19 pandemic?
Bangladesh secured the top position in countering the pandemic in South Asia and fifth in the world, according to the Nikkei COVID-19 Recovery Index. This could not have happened without strongdigital infrastructure. We conducted school, government activities and even held court online. We took immediate steps to combat the virus and quickly formulated programs to support the economy and vulnerable segments of the population. Our economy continued growing even throughout 2020.

What is the role of tech and innovation in Bangladesh’s growth?
We are laying the groundwork for a dynamic ICT sector. Our first mission of making Bangladesh a digital country has been achieved. For a brighter future, we have adopted a new program known as ‘Smart Bangladesh.’ We are establishing universities in every district of Bangladesh and technical and vocational institutions in every county. We are encouraging our young people to innovate rather than imitate. We want our young people to be entrepreneurs and give a high priority to start-ups.

How is your administration dealing with climate change?
We are building a sustainable and resilient delta for future generations while securing a balance between food security and energy security without compromising the ability to cope with the adverse impacts of climate change. My government mainstreamed climate change in our national development policies. In 2009, we became the first developing country to have a comprehensive climate plan. We also established our own national climate finance mechanism with our own resources. Bangladesh also has the world’s most extensive solar home system, covering almost 20 million people, and is globally acclaimed for its impressive record in disaster risk reduction. A large chunk of our development budget is channeled into addressing climate change. Had it not been impacted by climate change, our GDP could have grown at the rate of 10% plus for decades, fulfilling the development aspirations of 165 million people. Bangladesh is not responsible for climate change. So, it is our right to seek preferential and unconditional access to green climate technologies. We urge the developed countries to remain faithful to financing commitments under the Paris Accord and then scale it up further for a net zero future. 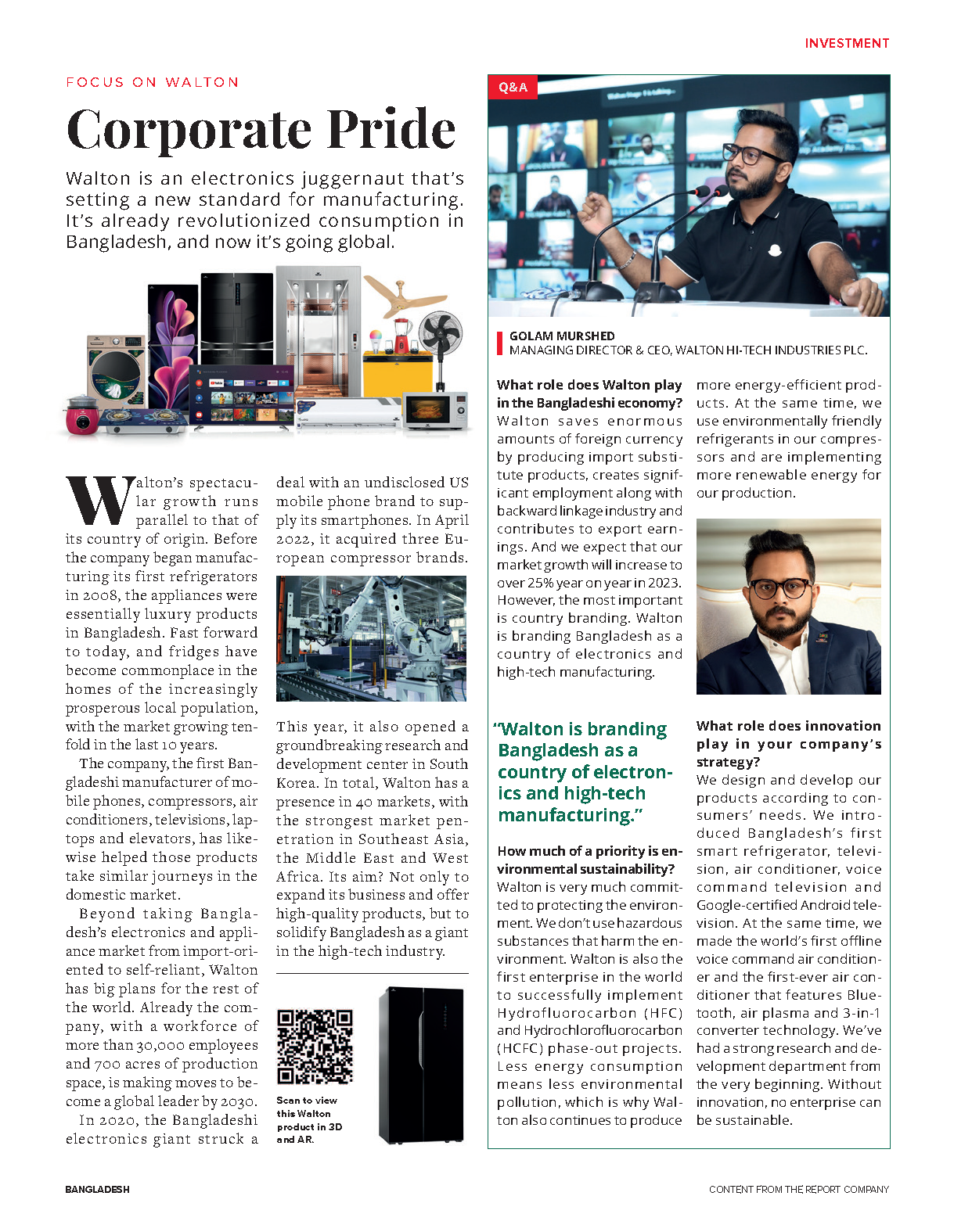