নীড় ঊপসম্পাদকীয় Padma Bridge: A Symbol of Pride and Dignity 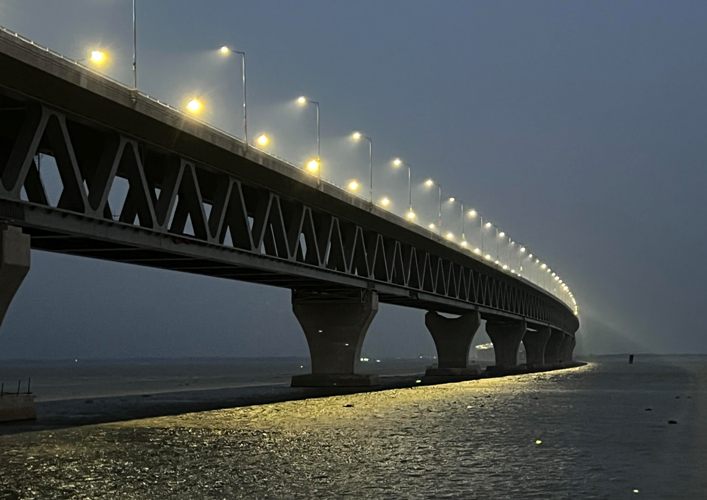 It is no more a dream; it is now a reality. It is a symbol of pride and dignity of the Bangalee nation. It is a symbol of courage of Prime Minister Sheikh Hasina as she has made it happen overcoming multiple challenges and obstructions, including local and international conspiracies. Yes, the Padma Bridge is the epitome of Sheikh Hasina’s visionary and bold leadership.

To turn a dream into reality, one needs determination, dedication and boldness. Sheikh Hasina has all these qualities as a great statesman. Bangladesh is moving forward at an irresistible speed under her dynamic leadership.

When it comes to the Padma Bridge issue, we cannot but mention that Father of the Nation Bangabandhu Sheikh Mujibur Rahman first thought about constructing a bridge over the mighty Padma River. Bangabandhu sought Japanese cooperation in this regard during his Tokyo visit in 1973.

It is a great regret that after the martyrdom of Bangabandhu Sheikh Mujibur Rahman in 1975, no government took any initiative to construct a bridge over the Padma River.

After 21 years, Awami League came to state power and party chief Sheikh Hasina took oath as prime minister on June 23, 1996. After assuming office, Sheikh Hasina took initiative for building a bridge over the Padma. After a pre-feasibility study done from 1998 to 2000, Sheikh Hasina laid the foundation stones of the Padma Bridge on both sides of the river (Mawa and Jajira points) on July 4, 2001.

But construction of the Padma Bridge fell into uncertainty as the Awami League suffered defeat in the general election held in October 2001.

After returning to power in 2009, the Sheikh Hasina-led Awami League government started work on the construction of the Padma Bridge amid conspiracies at home and abroad.

The premier inaugurated the main work of the mega Padma Multipurpose Bridge project on December 12, 2015.

Sheikh Hasina had a plan to start construction of the bridge in 2012. But it was delayed as the government faced various obstacles and conspiracies from different ends at the very beginning of the project.

The Padma Bridge was supposed to be built with loans from the World Bank, Asian Development Bank (ADB), Japan International Cooperation Agency (JICA) and Islamic Development Bank (IDB). Unfortunately, many of our politicians, economists and some so-called intellectuals did ugly and dirty politics over the construction of the Padma Bridge. They started hatching conspiracy to destroy the dream of the people of the country’s southern region as well as the nation.

At one stage, the World Bank brought allegation of corruption in the Padma Bridge project. It gave several conditions to the government for getting the credit support. A tussle between the government and the global lender continued over the issue. But the Bangladesh government did not bow down to the global lending agency.

Finally, the World Bank backtracked on its commitment to provide loan in favour of the mega project in July 2012 on the basis of a false and baseless allegation of corruption. Other lending groups also followed the World Bank.

The World Bank had committed $1.2 billion, while ADB, JICA and IDB had committed another $1.15 for implementing the Padma Bridge project.

Soon after the cancellation of the World Bank funding, Prime Minister Sheikh Hasina had declared that the Padma Bridge would be built with Bangladesh’s own fund. And she completed the tough task with her courage, determination and honesty. She proved Bangladesh’s capacity of doing a challenging job. Sheikh Hasina showed the world: Yes, we can.

Now, the bridge is going to open to traffic on June 25. Vehicular movement through the much-awaited Padma Bridge will start from the morning of June 26, a day after the ceremonial inauguration of it by Prime Minister Sheikh Hasina. The premier will inaugurate the bridge at 10:00am on June 25.

After the inauguration of the Padma Bridge, the premier will address a mammoth public meeting to be held at Shibchar-Jajira point under Madaripur and Shariatpur districts. More than one million people are expected to attend the gathering.

The 6.15km Padma Bridge will bring a revolutionary change in road communication as it will connect 21 districts of the south and southwestern region with other parts of the country, including the capital. At present, nearly 30 percent population of the country remained detached from capital Dhaka due to the mighty river Padma.

The country’s largest infrastructure will also save time and money of travellers as it will shorten distance between the capital and 21 southern districts.

The people of the country’s southern region are facing untold sufferings at ferries in crossing the mighty river Padma. They have to wait hours after hours for crossing the river. Their agonies will go after June 25.

The mega infrastructure would contribute to boosting the national economy, particularly in the southern region. The long-cherished Padma Bridge would help boost international trades through Mongla and Payra seaports and Benapole and Bhomra land ports. It will also attract local and foreign investors to set up new industries in the country’s southern region. People of the area are expecting that there will be an industrial revolution in the region centring on the Padma Bridge.

Over 30 million people of the south and southwestern region will directly benefit from the bridge.

The lives and livelihoods of the people of the country’s 21 southern districts will get tremendous improvement within short time.

The bridge will create employment opportunities for millions of people as economic zones, tourism spots, hospitals, universities, resorts and hotels will be set up in the region.

Railway communication through the double-decker Padma Bridge is scheduled to start in 2023. The people of the country’s south and southwestern region will be benefitted most. The bridge will transform the country’s economy as goods transportation from the seaports and land ports of the region will be cost-effective and easy.

The Padma Bridge will facilitate transportation of agri-products from the south and southwestern region and as a result, the bridge will come as a blessing for the farmers of the region.

Moreover, the people of Barishal division are going to have railway service for the first time thanks to the construction of the Multipurpose Padma Bridge.