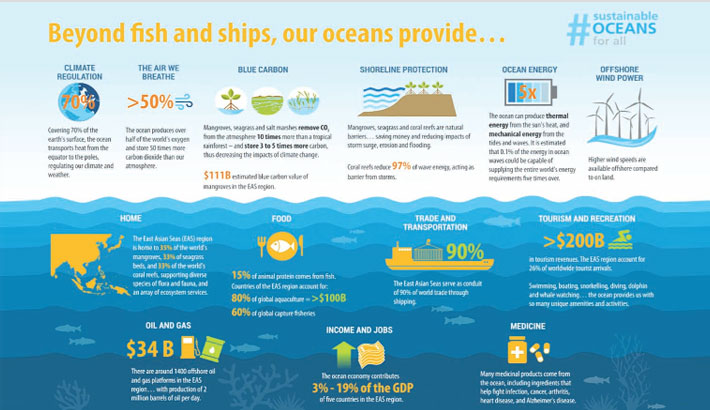 Bangladesh’s Advantages as a Coastal Developing State: COVID-19 has inflicted unbearable miseries and sorrows on mankind, through colossal loss of lives, fall of output and strains on resources. The blue economy may be an answer, at least partially. It has received serious consideration in Bangladesh after her securing the legitimate portion of the sea area of 207,000 square kilometres.
The ocean and the sea, apart from forming 95 per cent of the biosphere and holding 47.7 billion cft of waters, contain unlimited wealth and offer scope for extraction of resources and generation of employment to enrich mankind as a whole. Indeed, one of the principles of the blue economy is to ensure well-being and integrated development of mankind in totality eradicating poverty utilising ocean and sea resources, keeping those natural gifts unharmed. Coastal and Island developing countries have been recognised by UNEP, FAO, IMO, UNDP, IUCN and GRID as a priority under the Blue Economy because oceans and seas may render those countries the opportunity of adopting sustainable development strategies suiting their circumstances, constraints and challenges.Bangladesh being a coastal developing state with presently around USD 1816 per capita income may get advantages like equitable access and sharing of benefits as well as receive a portion of funds required for planned investments in her blue economy endeavours to achieve the target of having per capita income of USD 2750.00 by 2025 or to reach the level of a rich nation by 2041.Appropriate Technology: All over the world, all nations, especially those having sea boundaries are seriously concentrating, considering and evaluating all aspects and possibilities of developing and harnessing the treasure of the ocean and the sea. WWF (World Wildlife Funds) value key ocean assets over USD 24.00 trillion. It is working towards generating awareness of the value and importance of oceans and seas in the sustainability of mankind. Many economic activities, such as shipping, fishing and extraction of oil and gas are benefiting mankind using the ocean. But for further new activities, contemporary engineering and technology may only be partially useful for the blue economy. New technologies are needed in the most cases, if not for all. These are to be developed.

The whole world is conducting research and investigations to frame befitting devices and systems for using in the ocean surface and under waters. Also it is mentionable that any one technology may not be appropriately useful for all nations for their varying geographical locations. For example, solar energy technology may be similar but unlikely to be the same. The angle of incident of the sun’s rays and energy content may not be the same for tropics and non- tropics. The required floats may differ in design depending on the nature of the sea. For wind energy, the intensity, wind speed and variation of the same over the year dictate the design of wind blade profiles and height of towers, etc. Even the type of fishes, their behaviour patterns and breeding seasons may vary from one region to another. Same applies for algae and other ecosystem members. A country thus should have her own technology developed according to her need. Therefore, a “Blue Economy Cell” in the Ministry of Foreign Affairs with a mandate to coordinate blue economy initiatives across sectoral ministries may not suffice. Bangladesh should have an R&D Division in the Ministry of Education or an Institution outside the Ministry but under its control dedicated to research and studies on the blue economy.

There is a department on the ocean sciences in the Oxford of the East teaching undergraduates producing Bachelors of Science in different fields related to the ocean and the sea. This has been an appropriate step. However, the department should have facilities for experiments, analyses and extensive training and touring of faculties to appraise themselves with the ongoing technologies, on the eve of development for practical applications and innovations in this field. There is a clear guideline in “Future Science Brief on Marine Graduate Training” published by the European Marine Board in 2016, such as, “promote internationalism”, “partnership between academia, policy and industry” and “attractive academic careers”.

Worldwide Scenario: The awareness of the fast development progress in exploring ocean and sea resources worldwide may bear a critical role. Therefore, a quick survey of the present international scenario including ongoing thoughts is due. To note that the forecasted worldwide energy extraction from thermal conversion of ocean waters is 7 tetra watts (TW) from waves, 5 TG from salinity gradient, 01 TG from tides and 0.50 TG from winds setting huge blades at a height of 80 meters, in general. Theoretically 20,000 to 80,000 litre of oil may be produced from microalgae culture in a year in an area of one hectare in the ocean. For energy, Bangladesh thus should look into these technologies and adopt them, adjusting and improving to suit circumstances prevailing in her oceans and seas.

It is predicted that shipbuilding and ship repair may grow by seven per cent per annum for the next 15 years. By 2030, new building tonnage will be doubled of tonnage in 2015, i.e. 240.00 million Compensated Gross Tonnage (CGT). Shipping will grow at four per cent out-pacing overall global predicted growth of 3.45 per cent. A significant boost in cruising and marine tourism is expected. International tourist landings will increase to 1.8 billion from 1.4 billion today. 43 million tourists will be added annually up to 2030. The targeted contribution is USD 200.00 billion per year. Bangladesh must develop the technology to build these ships and to enter the tourism market vigorously. In spite of depletion in fish stocks worldwide, it is estimated that the catch may reach as high as 85 million tons by 2030 and 350 fishing craft may need to be added annually to the existing fleet. A contribution of USD 100.00 billion is aimed at. At the same time, it is urgent for Bangladesh to be cautious about protecting the newly obtained fishing grounds from illegal fishing by outsiders without lapse.

Funds for Investments: Keeping ongoing projects and planned projects of priorities in place, fund constraints may stand on the way to investment for developing the blue economy. We may look to the international communities, institutions, especially the investors keen to nourish the environment, keep the carbon foot-prints limited and uplift the living standard of mankind. Some organisations with developed technologies may be interested to form joint ventures to explore resources in the waters of Bangladesh. This is possible under the private sector or through G2G. The first global guiding framework for banks, insurers and investors to finance a sustainable blue economy undertaking has been adopted in 2018. The guidance has been by EC (European Commission), the WWF (World Wildlife Funds), the WRI (the World Resources Institute) and the EIB (European Investment Bank) and hosted by UNEP FI (United Nations Environment Finance Initiative) as a part of the sustainable blue economy finance. One of these sources, for example, is the European Structural and Investment Funds (ESIF). The overall budget was Euro 199.00 billion up to 2020 with a component of Euro 71.00 billion for the Blue Economy. These funds are accessible directly to the European Commission or to the regional and national wings of ESIF.

Indicative Contributions: Contributions of the blue economy in 2020 exceeded USD 1.85 trillion and added 36 million direct employments globally. Further, extensive plans and programmes have been envisioned for the next 10 years up to 2030 for various activities according to blue economy principles, all sustainable, discouraging already unsustainable undesirable initiatives undertaken. In 2030, it is forecasted that value addition may hit USD 3.2 trillion and direct employment to 43 million heads under continued present scenario. Bangladesh should undertake activities to have a bite of this cake.

Information Collection: For mapping the sea bottom to acquire knowledge and information of topography, composition, dynamics of ecosystem and other features, powerful satellite altimeter technology and gravity modelling are being used. For long term strategic planning, a more accurate bottom profiling by multi-beam sonar systems and Autonomous Underwater Vehicle (AUV) is required. Bangladesh may use those available data and information if available for her part of the ocean and the sea or use these technologies to collect information of the part of her oceans and seas to undertake activities in the near future. She may adopt the principle of attaining step by step perfection.

Marine Biotechnology: Marine biotechnology is very potential to meet the increasing demand of food, nutrition for human health, environmental rehabilitation and to support the growth of green industrial sectors. In money terms, the contributions of oceans and seas using this technology is predicted to be USD 4.6 billion by 2017, which may exceed USD 10 billion by 2030. Marine biotechnology may significantly contribute to the development of new antibiotics and other biomedical products, such as, anti-bacterial and anti-fungal as well as nutraceuticals and cosmeceuticals. It is a novel source of supply of enzymes and polymers. Bangladesh may concentrate in this field and examine if the ocean can be a source of raw materials, which are being imported at present, for her fast growing pharmaceutical sector.

Deep-Sea Mining: Deep-sea mining focuses especially on three minerals, i.e., manganese nodules, cobalt-rich ferromanganese and massive quantities of sea floor sulphides. The deep sea mud is of some interest for Rare Earth Elements (REE). A few licenses for exploration of minerals have already been issued, 26 applications are pending and six expired in 2016. However, Bangladesh may keep these mining possibilities at the end although she lacks mineral reserves. It is observed that mineral resources which are available at the disposal of mankind, presently may adequately meet the expected near future growing demand over time.

Concluding Remarks: It is to be noted with concerns that the formation of legal frames and rules is inadequate to keep pace with the fast growing blue economy which may result in detrimental impact on the ocean and the sea as well as on the environment. However, it is a rigorous process to quickly mitigate these weaknesses. All concerned are looking forward to achieving better efficiency, productivity and reduced cost structures in ocean and sea activities in sectors like shipbuilding, shipping, energy harnessing, fisheries and tourism and to all other promising fields through using sensors, imaging, materials developed by the nanotechnology, computer power automation in operation, improved technologies, better subsea engineering and refined biotechnology, etc. 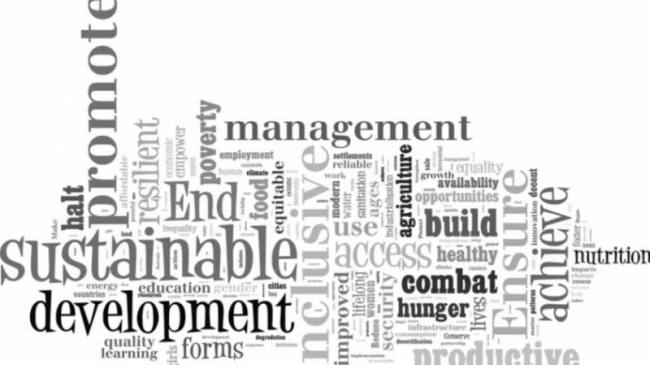