Bangladesh has reduced hunger by a significant margin and ranked aboveIndia and Pakistan, according to a report published by Global Hunger Index (GHI) 2019. With a score of 25.8, Bangladesh ranked 88th in the index, among 117 qualifying countries while Pakistan ranked 94 with 28.5 points and India ranked 102 with 30.3 points. 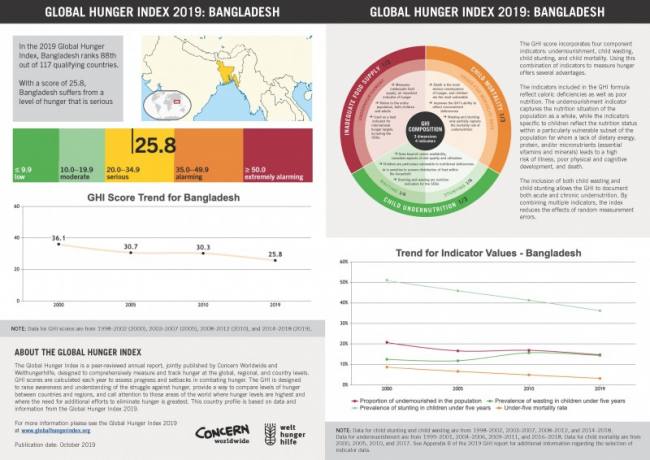 Among the South Asian countries, Sri Lanka ranked the highest at 66th, with a score of 17.1, while Afghanistan ranked lowest scoring 33.8. Bhutan and Maldives were not included, due to a lack of data. The countries are given GHI scores based on four factors: undernourishment, child wasting, child stunting, and child mortality.

Although it has managed to reduce the hunger rate, the severity still remains serious, the report says. The GHI “Severity Scale” shows the severity of hunger – from low to extremely alarming – associated with the range of possible GHI scores. The 100-point scale starts with 0 being the best score (which means no hunger) and 100 the worst.

A high GHI score can be evidence of a lack of food, a poor-quality diet, inadequate child care-giving practices, an unhealthy environment, or all of these factors. Among the four factors, Bangladesh fared poorly in reducing the prevalence of stunting in children less than five years, with a score of 36.2. However, with a score of only 3.2, it did extremely well in reducing child mortality rate.

Meanwhile, India scored high on child wasting, with a score of 20.8 – the highest wasting rate of any country mentioned in the report for which data or estimates were available. Outside India, two countries in South Asia made significant advances in child nutrition, and their experiences are instructive, the report says.

The Global Hunger Index (GHI) is a tool designed to comprehensively measure and track hunger at global, regional, and national levels. GHI scores are calculated each year to assess progress and setbacks in combating hunger. The GHI is designed to raise awareness and understanding of the struggle against hunger, provide a way to compare levels of hunger between countries and regions, and call attention to those areas of the world where hunger levels are highest and where the need for additional efforts to eliminate hunger is greatest.

Measuring hunger is complicated. To use the GHI information most effectively, it helps to understand how the GHI scores are calculated and what they can and cannot tell us. 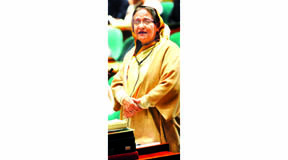