Indian Prime Minister Narendra Modi, in his ten- minute interaction with the opposition delegation during his recent visit to Sri Lanka, is reported to have mentioned the importance of political stability as a requisite for economic and social prosperity.

In his short discussion with the delegation led by Opposition Leader Mahinda Rajapaksa, Mr. Modi referred to Bangladesh as the classic example in South Asia to drive home his point – how political stability had been fundamental to sustained economic development.

A country previously hamstrung by chaos, Bangladesh has now been politically stable since 2009, under present Prime Minister Sheik Hasina whose Awai League is in absolute control of Bangladeshi Parliament for the third time in a row. The Hasina administration has delivered in terms of massive economic gains for her country making it an attractive place for foreign investors.

Going by the statistics of the Bangladeshi government, the country’s achievements on the economic front are impressive. It boasts of a growth rate of eight percent, and is one of the world’ three fastest growing economies as confirmed by the International Monetary Fund (IMF).

Sustained economic growth is impossible without political stability. At the general elections conducted on December 30, 2018, Sheikh Hasina’s ruling alliance won virtually every parliamentary seat. Her Awami League won 288 out of 300 seats — 96 percent in Parliament. She is now serving her third consecutive term. Her first term started in 2009.

It is not only a country of food surplus but also an exporter of agriculture products. Commendable is the fact this achievement has been made despite the shrinkage of land available for agriculture. Every year, the extent of land, meant for cultivation, shrinks by one percent due to urbanization and industrialization.

Bangladesh also has an advanced pharmaceutical industry amounting to US $ 3 billion. As an industry which is mostly homegrown, the Bangladeshi pharmaceutical companies manufacture high quality products including effective anti- cancer drugs, to be exported to 151 countries across the globe including Sri Lanka.

All these gains were made possible mainly because of stability coupled with policy consistency. Investors look to Bangladesh because of a myriad of factors, and political stability features high among them.

Obviously, the Indian Prime Minister cited Bangladesh as a case study that proves interlink between political stability and economic success because of such visible advancements. 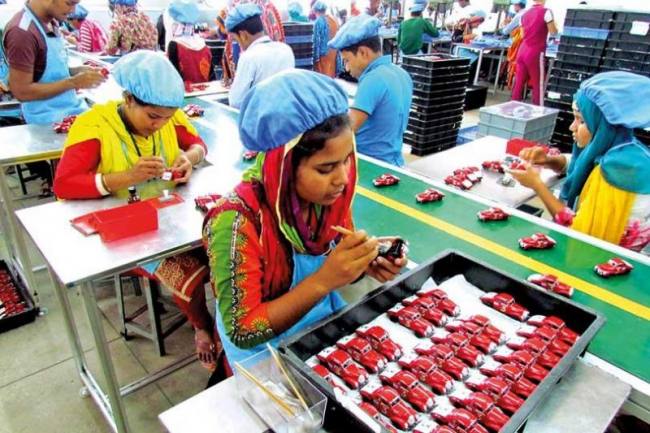 Political uncertainties and indecision crippled development during the last four and half years in Sri Lanka. Many of the key development projects could not take off or reach completion. The present Sri Lankan government attached importance to finalize the central expressway project in three phases at the initial stage. Nonetheless, the work did not proceed on the phase 1 of the expressway between Mirigama and Kadawatha. Besides, the government was even unable to commence work on the phase 111 of the project between Galagedara and Kandy. The government planned to commission the stretch between Mirigama and Kurunegala. However, it is not a realistic target as things stand at the moment. Unstable governance is the root cause of the inability to achieve set development targets.

Be that as it may, the robust economic growth in Bangladesh has even offered opportunities for Sri Lankan companies to go global. Bangladesh is the second largest economy in South Asia with US $ 95 billion foreign trade.

A number of Sri Lankan companies have gained foothold in Bangladesh. Hemas is a local company that gets a sizeable part of its profits from its operations in Bangladeshi market. According to Bangladeshi High Commissioner Riaz Hamidullah, Kumarika, a Hemas product, is the largest selling hair oil brand in Bangladesh.

Cuisine is also similar, more or less. In Bangladesh, red chili and black pepper are less used. Instead, they use more of watery gravy and turmeric in curry.

Despite impressive gains presented in terms of figures, Bangladesh also faces challenges. The inequitable distribution of wealth has created a huge gap between the rich and the poor. To bridge that is a challenging task.

For any country, a sustained growth rate lifts people out of poverty and expands its middle class. For any country, economic development becomes sustainable only when there is governing stability coupled with consistent policies, devoid of corruption and frauds.

Today, political unrest has created economic stagnation in Sri Lanka with the ministers just idling with little work to be done, or with no enthusiasm for it.