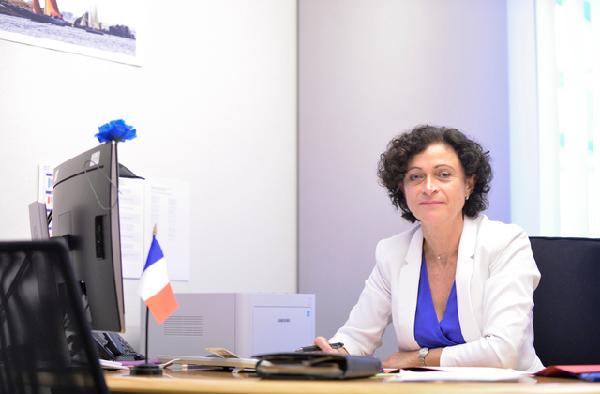 by CHRISTELLE LECHEVALIER , MEMBER OF THE EUROPEAN PARLIAMENT

I recently visited Bangladesh, as a part of a delegation comprising parliamentarians from the European Union. This was my first trip to the country, and to its capital Dhaka. I knew that I was visiting one of the most densely populated capitals in the world, and I was unsure what to expect.

What struck me the moment I landed at the Dhaka International Airport was the presence of a large number of women managing the immigration desks and shop counters. At the hotel too, I noticed that the staff were a mix of both genders, most without headscarves. I firmly believe that a workforce that comprises of a large number of women is an indication of a social order that is inherently safe for women, and in which the gender divide is limited. No wonder the World Economic Forum’s (WEF) Global Gender Gap Index for 2018 has placed Bangladesh at the 47th position, making it the 2nd most “gender equal” country in Asia, just behind the Philippines.

My meeting with Sheikh Hasina, the dynamic woman Prime Minister of the country, gave me further insights into what the government was doing to encourage women’s participation in all aspects of the country’s development. It was heartening to know that Bangladesh had recently appointed its first woman judge and its first Army Major General. The Government has also invested heavily in the education of the girl child, and provides them stipends and scholarships to ensure that they complete high school. The Prime Minister said that her challenge now was to understand why boys were not doing as well as girls in schools and colleges.

The increasing number of girls getting educated has, concomitantly, led to a rise in the number of women joining the work force.  In addition, between the years 2010 and 2013, banking and non-banking institutions have distributed USD 860 million as loans to more than 57,000 women entrepreneurs. In 2016, 11,000 women have received more than USD 1.2 million in such micro loans. 20 million Bangladeshi women are employed in various sectors, 3 million of whom are in the ready-made garment sector.

While this may seem normal for us in Europe, it is indeed a creditable feat for a Muslim-majority country that has been jostling with problems of poverty and rising Islamic radicalization. As per the WEF report, Bangladesh has closed almost 72 per cent of its overall gender gap, with advances in every aspect of the Economic Opportunity and Participation Indicator.

The immense strides made by Bangladesh in the field of women’s empowerment economic, social and political, can be comprehended if one compares Bangladesh’s development index with that of Pakistan, the country with which it was co-joined until 1971. Currently, Pakistan is placed 143rd of the Global Gender Gap Index, just one above the last position, and behind countries such as Saudi Arabia. Bangladesh too could have been in a situation similar to Pakistan, where the increasingly powerful radical Islamic groups have emerged as impediments to women’s empowerment. In contrast, the Awami League government of Sheikh Hasina, which has been in office for the last 10 years, has taken up the challenge to de-radicalise the political, social and religious fabric of the country. As a result, it is a society where religious minorities feel secure to practice their religion and women confidently strive to achieve their ambitions.

Ever since Prime Minister Sheikh Hasina took office in 2009, she has accorded the highest priority to making women living in Bangladesh, economically and socially self-reliant. In recognition of her contributions, she has also been awarded the Mother Teresa Award and the UNESCO Peace Tree and Global Women’s Leadership Award.

Women consideration is a matter of human rights and fundamental values enshrined in International Law, UN and European Union (EU) treaties and legislations, as well as in the legal systems of various Member States, including my own, France. The EU congratulates the Government of Bangladesh for taking this difficult path despite various domestic challenges, leading to a more equal, secular and prosperous nation.