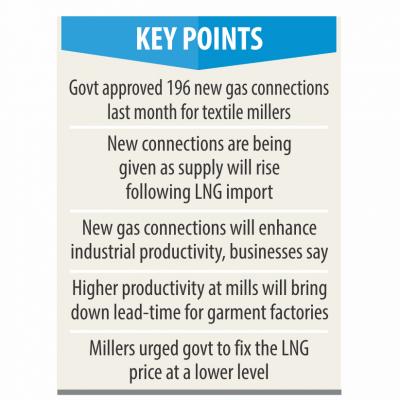 The textile factory owners see an increase in their productivity, as the government has finally decided to allocate 2,000 new industrial gas connections and supply adequate gas to the existing units.

The move to allow new industrial gas connections after a seven-year pause comes in light of the recent import of liquefied natural gas from Qatar.

The government has already approved 196 new gas connections last month for members of the Bangladesh Textile Mills Association, the platform for spinners, weavers, dyeing mill owners and other allied industries.

The BTMA members are one of the major gas consumers as the running of spinning mills requires a lot of gas, said Mohammad Ali Khokon, vice president of the association.

The primary textile sector will be immensely benefitted as many of the factories could not begin production in the absence of gas connections, while the other mills were running below capacity for want of adequate gas pressure.

“I hope that productivity in my mill will go up now,” said Razeeb Haider, managing director of Gazipur-based Outpace Spinning.

Last month, state-owned Titas Gas agreed to increase the gas pressure in the unit of Haider in response to an application which was submitted in 2014.

Khokon said the development will come as a boon for garment manufacturers as they look to boost their export receipts to $50 billion from the existing $28 billion by 2021.

“Their lead time will be cut significantly.”

At present, the garment makers have to import fabrics from China and India, but soon the local spinners and weavers would be able to supply the fabrics to them.

Gas supply through the new connections will start from next month, according to Mir Mashiur Rahman, managing director of Titas Gas.

Khokon urged the government to fix the price of LNG as low as possible so that the industry truly benefits from the initiative.  The government has proposed to fix the LNG price for factories at more than Tk 14 a cubic metre, up 45.53 percent from the existing rate.

At present, the textile millers pay Tk 9.62 for every cubic metre of gas and use Tk 8 to Tk 9 worth of gas to produce a kilogramme of yarn, according to industry insiders.

The ship carrying Bangladesh’s first import consignment of LNG anchored in the Bay of Bengal on April 25. Supply to the national grid is scheduled to begin next month.