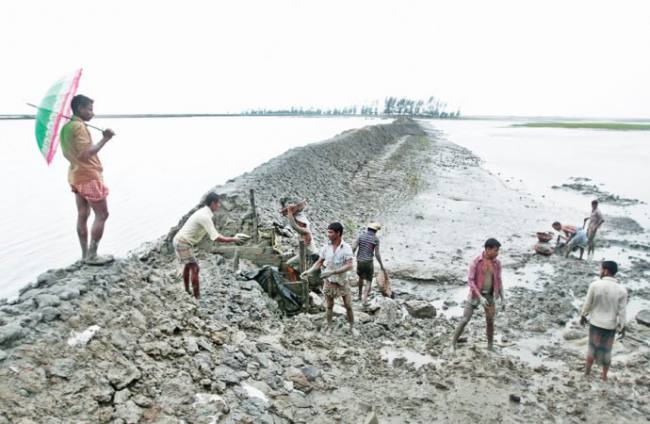 The Bangladesh Climate Change Strategy and Action Plan (BCCSAP) 2009 demonstrates the country’s commitment and understanding of climate change. It is a key document that reflects national priorities in terms of adaptation and mitigation.

This paper analyzes the thematic distribution of projects implemented by BCCTF in Bangladesh. Information for the study was gathered through semi-structured interviews and expert consultations, along with review of pertinent literature.

The government of Bangladesh used its own resources to create a fund that was channeled through BCCT, with the aim of reducing vulnerabilities and combating climate change. The following table summarizes the government’s budget allocation from 2009-10 to 2016-17.From an analysis of the over 400 projects implemented, it has been observed that the highest number of projects allocated were in T3: Infrastructure development, followed by Food security, social protection, and health (T1), Mitigation and low carbon development (T5), comprehensive disaster management (T2), capacity building and institutional strengthening (T6) and research and knowledge management (T4) (see figure below).

Another study of projects implemented from January 2010 to February 2014 showed that over 70% has been allocated to the T3 thematic area of the BCCSAP, followed by mitigation and low carbon development (13%) and food security, social protection and health (10%).

A review of 82 projects (till June 2012) revealed that the highest amount of money (Tk434 crore) ie 44% of the total allocation, was allotted to infrastructure related projects such as repair and maintenance of embankments whereas food security, social protection, and health received only 16.84% for implementing 17 projects.

The most vulnerable sectors such as agriculture, livelihoods, and health have received the least allocation, compared to infrastructures. Contribution of the funds towards the theme research and knowledge management (T4) and capacity building and institutional strengthening (T6) were found to be minimal.

This will hinder systemic monitoring of climate change impacts over key sectors like agriculture, hydro-meteorology, and livelihood, as they are necessary for adaptation planning.

The analysis of projects indicated that although project allocation increased over the years from 2009-10 to 2015-2016, budget allocation overall had decreased (see following graph). During the years 2009-10, a total of 32 projects were implemented, out of which 31% was allocated to the Ministry of Environment and Forests.

From 2010 to 2016, the distribution has changed drastically, with the Ministry of Local Government, Rural Development and Cooperatives receiving 63% of the total funding and Ministry of Agriculture’s share plummeting to merely 4% of the budget.

The Ministry of Disaster Management and Relief gets 1% of the CCTF funds for project implementation and the Ministry of Environment and Forests has a share of 15% which is almost half the funding this key ministry used to receive when the fund was first introduced.

According to several respondents, there was political influence and specialized funds were used for usual development interventions like construction of embankments. There was almost no innovation potential, as most of the money was spent on traditional infrastructures.

A counter argument given was that because water is a major cross-cutting issue, most projects focused on that sector. Another issue raised by informants was that there was almost no discussion between the ministries when projects were planned.

Except large projects that undergo EIA, most small projects had no climate screening and were unsustainable. One of the strong criticisms of the CCTF projects was also the fact that they did not follow the usual development process and this gave rise to governance issues of transparency and accountability.

CCTF has been acclaimed for their investments in strengthening LGIs in Bangladesh (municipalities). T1 is another theme where they invested a significant amount though initiating projects like floating gardens in water-logged areas, supplying pure drinking water, enhancing sanitation facilities in flood prone areas, innovation and introduction of stress tolerant crops in coastal areas.

Projects such as “Community Based Adaptation in the Ecologically Critical Areas Through Biodiversity Conservation and Social Protection” and “Revegetation of Madhupur Forest through Rehabilitation of Forest Dependent Local and Ethnic Communities” have been internationally acclaimed for their innovation potential, sustainability, and catalytic impacts, beyond the project period.

In future, we need to diversify our ideas and be more creative about mixing themes and programs. The government can partner with institutions like PKSF and set up a strong monitoring mechanism.

Projects need to follow the standard development process practiced in Bangladesh and modality of the projects should be programmatic for lasting impacts. Furthermore, technical capacity of the planners and policy-makers need to be enhanced for selecting and implementing projects which are befitting and beneficial for the most vulnerable communities impacted by the perils of climate change in Bangladesh.