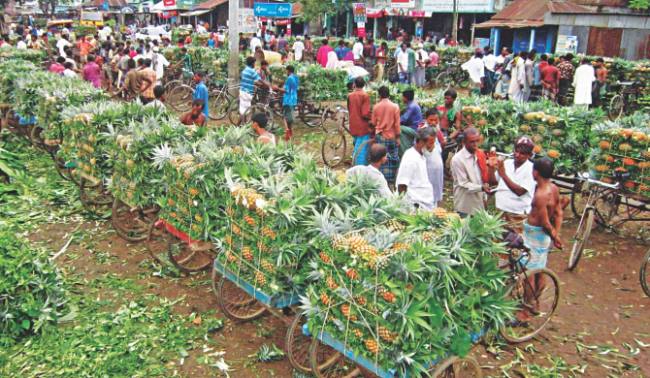 Farming of different local fruits is increasing in the district.
According to the Department of Agriculture Extension (DAE), Tangail, good yield and satisfactory market prices have been encouraging the growers to extend the cultivation of local fruits.
Farmers said they have attained financial solvency. A good number of local youths have become self-reliant by growing varieties of fruits at their homestead orchard. They said the DAE has been providing all necessary support to ensure good production.
Different local varieties as well as high yielding fruits including mango, banana, guava, hog plum, papaya and lemon cultivation on the rise in the district, they added.
According to the DAE, more than 60 varieties of seasonal fruits, including 40 indigenous spices, are being cultivated on around 1,500 hectares of land including homestead.
Saplings of different mango varieties including Amropali, Haribhanga and Kancha mitha were distributed among the growers of different upazilas under the ‘Developing nutrition through producing fruits over the year’ project in the 2016-2017 fiscal year, said Ruhul Amin, sub-assistant agriculture officer of Horticulture Sector of DAE, Tangail.
Besides of these, saplings of high yielding coconut varieties – Siam Blue and Siam Green from Vietnam – were distributed among 480 local farmers in the 2017-2018 fiscal year, he added.
Cultivator Ahmed Miah of Bashail upazila said among the local fruits items quick growing fruits are more profitable as the growers can get from the investment within a short period of time.
Another farmer Shariful Islam of Shanbanda village under Shakhipur upazila said the local agriculture office provided him some saplings of high-yielding local fruits free. He planted those at his homestead. He said the saplings are growing well.
To encourage the local fruit growers, the DAE arranges training programmes and distribute fertilisers, insecticides and other inputs at free of cost, farmers added.