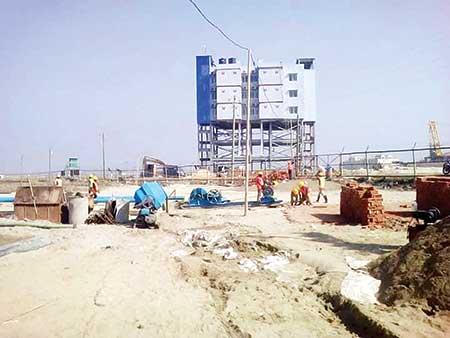 The construction work of the largest coal-fired power project at Matarbari under Moheshkhali Upazila of the district has started.
Power generated at this ultra super centre will illuminate the whole country.
Prime Minister Sheikh Hasina inaugurated the plaque for the main work on January 28 last.
After its implementation, the project is supposed to create employment for huge people of the country, and the economy will get a boost. In this connection, a massive urbanisation will take place there.
As per the government’s mega plan, Matarbari will turn into a “Power Hub”. Besides, a port being constructed centring the power plant will be turned into a deep sea port, said government sources. In this connection, permanent channel dredging has been started.
Sources said 18 per cent work of the project on 1,414 acres of land at Matarbari and Dhalghata has already been completed.
Bangladesh has a huge potential to produce renewable energy by using sea resources like air, wave, organic thermal changes and salinity. Besides, there are 475 species of fishes in the Bay of Bengal from where at least 66 lakh tonnes of fishes can be collected, but in reality the fishermen collect very meagre amount of the fishes.
After the project is implemented, the collection of fishes from the Bay will increase. Besides the fisheries resources, the Bay is rich in various mineral resources like gas, oil, copper, magnesium, nickel and cobalt, etc.
Managing Director (MD) of Coal Power Generation Company of Bangladesh Ltd (CPGCBL) Abul Kashem said, “In the meantime, around 400 foreign labourers have arrived and more 1,100 local and foreign labourers are working in the project. The CPGCBL signed a deal with a consortium of three foreign companies in July, 2017. If all goes well, the project will be completed by December of 2023.”
But, the Japanese consortium Toshiba Corporation said it might take more time to complete the project worth about Tk 50,000 crore.
The government approved a project worth about Tk 36,000 crore for Matarbari power plant in August, 2015. It was mentioned in the approval work paper of the project that Japan International Cooperative Agency (JAICA) will provide Tk 29,000 crore. But after the death of 17 foreigners in the Gulshan Attack, the government stopped the tender process of the project, which created confusion over the JAICA’s largest ever project. But, after resolving all confusion, the CPGCBL signed the deal with the consortium on July 27, 2017.
Centring the increase in trade and commerce, the construction of a deep sea port has gained much significance. Though the government prioritised the construction of a deep sea port at Sonadia, but no improvement has been found in this connection.
The export and import of the country has increased about 2 per cent in the last seven years. So, it has become difficult to manage import and export through the existing two sea ports. As the Matarbari power plant would be based on imported coal, so it has become necessary to use this future port for importing coal.
It was said that ships with the capacity of 80,000 metric tons would be able to anchor at this 59-foot deep port. With the latest technology, the port will be built following the model of Japan’s Kashima Port.
While asked whether the port could be used in purposes other than importing coal, MD of CPGCBL Abul Kashem said that the government would decide whether the port can be used in multipurpose.
Supervisor of the project Engineer Munir said the work is progressing fast with the assistance of local administration, public representatives and local people.
State Minister for Energy and Mineral Resources Nasrul Hamid Bipu, MP, said, “The port which is being built centring the import of coal for the power plant will be turned into a deep sea port. The lands on the bank of the Bay of Bengal in six moujas, which we are acquiring for the project, are currently being used for producing salt and farming shrimp. The plant will generate 1,200 megawatts of electricity. For acquisition purpose of the lands, we have so far compensated 90 per cent of the land owners.”
Lawmaker of Moheshkhali and Kutubdia Alhaz Ashek Ullah Rafiq said, “The project work is becoming evident. Huge people will be employed in this project.”
Chairman of Matarbari Union Master Mohammad Ullah said local people are assisting in this project.