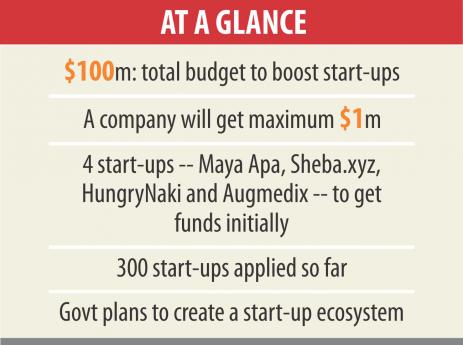 The government is set to invest a handsome amount on about 200 start-ups under its iDEA (innovation, design and entrepreneurship academy) project with a view to encouraging innovative ventures in Bangladesh.

A start-up is an entrepreneurial venture that is typically a newly-emerged, fast-growing business that aims to meet a marketplace need by developing a viable business model around an innovative product, service, process or a platform.

The company is designed to scale very quickly, and it is this focus on growth unconstrained by geography that differentiates start-ups from small businesses. For instance, a restaurant in one town is not a start-up, nor is a franchise a start-up.

The government has already shortlisted four start-ups in which it wants to take a portion of equity in exchange for Tk 5-10 crore. The start-ups are: Maya Apa, Sheba.xyz, HungryNaki and Augmedix.

The government is very hopeful that by June it can finalise the process of acquiring the companies’ shares, according to Zunaid Ahmed Palak, state minister for ICT.

“We are trying to create a culture of tech companies here and that’s why we are taking the lead here.”

Last year, the government created a fund of about Tk 800 crore ($100 million) to nurture innovative ideas on education, agriculture, health, financial services, e-commerce, e-Governance and some other service sectors under the iDEA project.

Other than the four chosen start-ups, iDEA has received about 300 applications for government investment and mentorship.

In most cases, banks are not comfortable with investing in digital service companies as they have no fixed assets and carry higher chances of not turning out to be economically viable ventures.

“Venture capital can make these bold ideas successful and that is why we are investing in them,” Palak said.

The government’s target is to invest in about 200 start-ups and if even five to ten of them turn out to be success stories it will be considered a satisfactory outcome, said officials of the iDEA project.

“Even if we can produce only one world-leading start-up, that will be sufficient,” Palak added.

For instance, the government is interested in investing in Augmedix Bangladesh, which is serving hundreds of doctors in the US by providing a real-time technology-enabled documentation service from Dhaka.

Before entering the exam room, a doctor dons Google Glass and then proceeds to talk with patients, rather than burying their head in a computer screen. Forms, health history, lab orders, prescriptions and more are completed effortlessly using a remote scribe, verbal notes and commands.

Over the last few years, Augmedix Bangladesh has saved millions of working hours through the process.

Last week, Gerard van Hamel Platerink, managing director of Redmile Group, a San Francisco based healthcare investment fund that has invested in Augmedix, called in to the Dhaka office and Palak discussed the government’s intent to come on board as an investor.

Sheba.xyz is a platform that connects the households and services to verified tradesmen as and when needed, already got investment of about $1 million, according to Adnan Imtiaz Halim, its chief executive officer. Its operations are now in Dhaka only but it plans to expand it countrywide.

“We need another $2 million from both home and abroad. That’s why we want the government as our co-investor, and so far, we got a positive response,” Halim added.

HungryNaki delivers meals from restaurants to doorsteps, while Maya Apa is an anonymous messaging platform that connects users to expert advice.