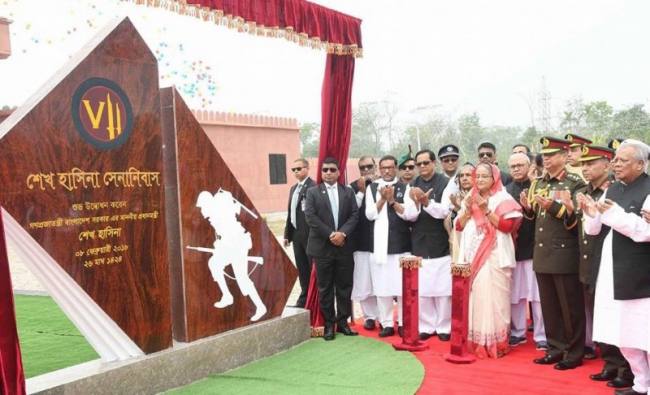 The premier opened the cantonment on the bank of Payra River in Lebukhali under Dumki upazila in the coastal district by unveiling a plaque.

She was accompanied by several ministers, parliament members, the chiefs of the three armed services, diplomats, former chiefs of army, and senior government officials.

She also inaugurated 14 development projects and laid the foundation stone of another scheme in Patuakhali by unveiling plaques from the same venue.

She also laid the foundation stone of an administrative building extension and hall room for the Galachipa Upazila Parishad.

The prime minister reached Lebukhali around 11:15am on an air force helicopter.

From Lebukhali, the prime minister will go to Barisal to inaugurate and lay the foundation stones of 74 development projects by unveiling their plaques from Bangabandhu Udyan.

Before flying back to Dhaka, Sheikh Hasina, also the Awami League president, will address a public rally to be organized by her party at Bangabandhu Udyan in Barisal city in the afternoon as part of her campaign for national polls that started in Sylhet on January 30.