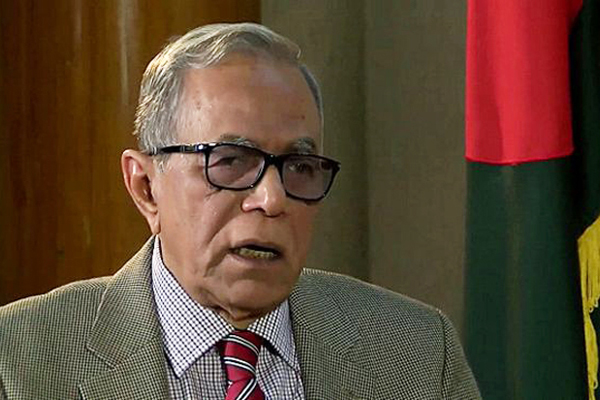 President Abdul Hamid has said Bangladesh is now being considered as a role-model in the world for socio-economic development.

These have been possible due to intellectual-mind, tireless hard work and undaunted courage of our people, the President said on Friday in a message on the eve of the victory day.

“16 December is our victory day, a glorious and memorable day in the history of the Bangali nation. On the eve of the day, I extend my sincere felicitations and warm congratulations to my fellow countrymen living at home and abroad,” the President added.

Independence is the greatest achievement of the Bangali nation but it was not attained in a day, he said adding Father of the Nation Bangabandhu Sheikh Mujibur Rahman, the undisputed leader, declared the historic independence on March 26, 1971 after overcoming various ups and downs and staging long movement and agitation against the Pakistani government.

“The ultimate victory was achieved through a nine-month long war of liberation under his leadership. Today, I recall with profound respect the greatest Bangali of all time, Father of the Nation Bangabandhu Sheikh Mujibur Rahman whose boundless sacrifices, uncompromising and charismatic leadership contributed to the emergence of Bangladesh as an independent and sovereign state in world,” the President said.

Paying his deep homage to the valiant freedom fighters who made supreme sacrifice in the war of liberation for the cause of country’s independence, he extended his deep gratitude to the organisers and supporters and the people from all strata who directly and indirectly made meaningful contributions to our war of liberation.

Abdul Hamid extended his sincere thanks to UNESCO for the recognition of the historic 7th March speech of Father of the Nation Bangabandhu Sheikh Mujibur Rahman as a world’s important documentary heritage and its inclusion in the ‘International Memory of the World Register’.

This recognition is the source of inspiration and a great pride for Bangali Nation, he added.

“The importance and significance of great victory day is boundless in our national history. On one hand victory has given us our own identity and on the other hand it has elevated us to world arena as an independent nation. But it is an irony that the path of development and the practice of democratic norms were not functioning smoothly all the time,” he added.

“The emergence of military autocracy and undemocratic government came into being after the assassination of Father of the Nation on 15 August in 1975 that hindered the flourishing of democratic pluralism. After about 6 years of exile, Sheikh Hasina, daughter of Bangabandhu, returned home on 17 May in 1981 and started movement against autocratic government for reviving democracy, he added.

Through a long struggle, democratic government has now been established in the country, the President said adding with the formulation of appropriate planning and making its best implementation, Bangladesh has achieved manifold successes both at home and abroad.

“The mega projects like the Padma Bridge are being implemented with our own resources. Construction of the Rooppur Nuclear Power Plant is started and it will generate 2400 MW electricity by the year 2024. Bangabandhu Satellite will be launched soon. This will be a new horizon for the development of telecommunication sector” he added.

Foreign Remittance being sent by expatriate Bangladeshis is making immense contribution to our national economy, Abdul Hamid said adding, “They are also the proud partners of our development.”

The government has successfully attained the targets of MDGs and now providing its continued efforts to achieve the targets of Sustainable Development Goals (SDGs) by 2030, he added.

“Our foreign policy is being exercised in accordance with the principle ‘Friendship to all, malice to none’ as adopted by the Father of the Nation. This year, Bangladesh has set a unique example by providing shelter to millions of forcefully displaced and tortured Rohingyas fled from Rakhine State of Myanmar on humanitarian ground,” the President added.

“But it is very difficult for Bangladesh to bear the burden of such a huge homeless people. Bangladesh believes in a peaceful solution to the problem,” he said.

He urged the UN and the international community, including Myanmar, to take immediate effective measures for the permanent settlement of this problem.

“Millions have sacrificed their lives for our independence. Combined efforts are imperative to make the sacrifice meaningful. On the eve of the victory day, I urge the countrymen to make more contributions from their respective positions in implementing the spirit of the liberation war and take the nation towards a prosperous future,” the President said.

The government has set ‘Vision 2021’ and ‘Vision 2041’ for transforming Bangladesh into a developed country, he added.

The President said “I am hopeful that we would be able to materialize the visions within the stipulated time by utilizing our huge human resources and information technology, Insha Allah. On the occasion of great victory day, I hope that our coordinated efforts will turn Bangladesh into a hunger and poverty free prosperous ‘Sonar Bangla’ (Golden Bengal) as dreamt by Father of the Nation Bangabandhu Sheikh Mujibur Rahman.”