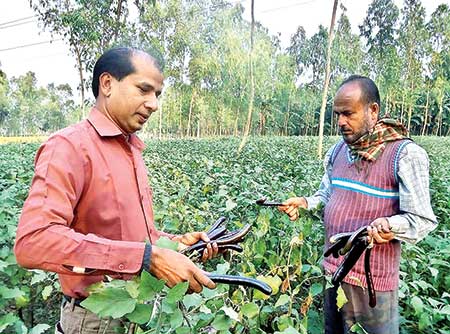 The local farmers are happy over bumper yield and fair price of brinjal in local markets.
Despite the recent flood, they have got good yield of brinjal this year due to favourable weather condition, farmers said.
They said they are now earning good profit by selling brinjal at Tk 20 to 24 per kg in the local markets. It was sold at Tk 12 to 15 in this time last year.
Mizanur Rahman, 42, of Burir Bazaar Village under Sadar Upazila said, “A farmer can earn Tk 45,000 to 60,000 spending only Tk 15,000 to 20,000 for cultivating brinjal on one bigha of land.”
Shafiqul Islam, 48, of the same village said, “I cultivated brinjal on five bighas of land spending Tk 1,30,000 and already earned Tk 1,40,000 by selling 95 maunds of brinjal. I have been selling the vegetable from the beginning of the season. It was Tk 1,600 to 1,800 per maund in the local markets.”
Joynal Abedin, 55, of Fulgachh Village in Lalmonirhat Sadar Upazila said, “Now we are selling one kilogram of brinjal at Tk 18 to 20 in the field but we sold it at Tk 30 to 40 early in November. It has brought solvency to our families.”
Brinjal grower Azahar Ali of the same village said, “I have already sold 400 kg of brinjal from my two bighas of land and hope to sell more 1,000 kg during this season. Next year, I will cultivate brinjal on more land. I hope to make a good profit from brinjal farming.”
“I cultivate vegetables in every season on my 50-decimal land and this season also I cultivated brinjal on the same land. My five-member family works together in the morning and afternoon for farming brinjal. I have already earned Tk 28,000 selling 900 kg of brinjal and hope to earn Tk 20,000 more from selling the remaining brinjal in the field,” said Hafez Uddin of Durakuti Village in Lalmonirhat Sadar Upazila.
Yakub Ali, a brinjal wholesaler at Borobari Bazaar in Lalmonirhat Sadar Upazila, said that he and other wholesalers in the area sent the best quality brinjal to the capital city Dhaka and other parts of the country this time.
Sources at the Department of Agriculture Extension (DAE) in Lalmonirhat said, brinjal is mainly a winter vegetable but many farmers cultivate this crop during off period and early in the season to earn good profit. Brinjal has been cultivated on more than 1,300 hectares of land this season in the district and it was 1,470 ha of land last year.
Deputy Director of Lalmonirhat DAE Bidhu Bhusan Roy said a farmer can grow 120 to 180 maunds of brinjal on per bigha of land if he takes proper care of the plants.
Brinjal farmers are gaining good profit this year despite this year’s flood, he added.