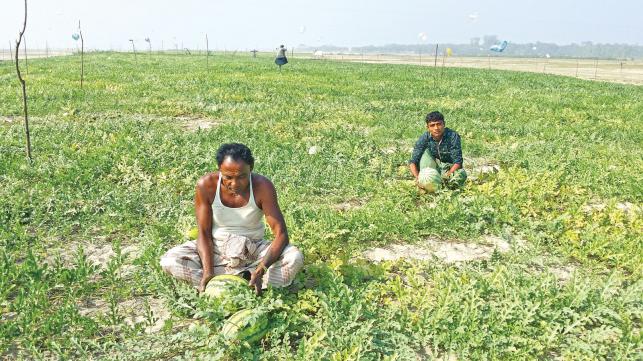 The char area farmers in Bagha and Charghat upazilas of the district have become self-reliant through cultivating different crops and vegetables for the last several years.
Meanwhile, many of them have changed their lot through farming bean, cabbage, cauliflower, tomato, radish, carrot, gourd, onion, garlic, brinjal and other vegetables.
While visiting on Sunday noon, this correspondent found many farmers at Chawkbazar, Gorgori, Pakuria and Monigaram areas taking care of their vegetable fields. But, once they had to pass days amid hardship. Now, most members of their families work in the field to grow different crops and vegetables to earn more profit.
While talking to The Daily Observer, farmer Rabiul Islam of Monigram said, “Around two years back, I thought no crops and vegetables would grow on the Padma riverbank. But, later I was successful in producing those and became self-reliant.”
“I cultivated garlic on more lands this year after getting quick profit last year. Now I am expecting a bumper yield this season,” he added.
Bagha Upazila Agriculture Officer Sabina Begum said, “The local farmers have been cultivating different crops and vegetables on the Padma riverbank areas for the last several years and getting success. Many of them have become self-reliant and changed their lot. If they get government support, they will be able to produce huge crops commercially.”