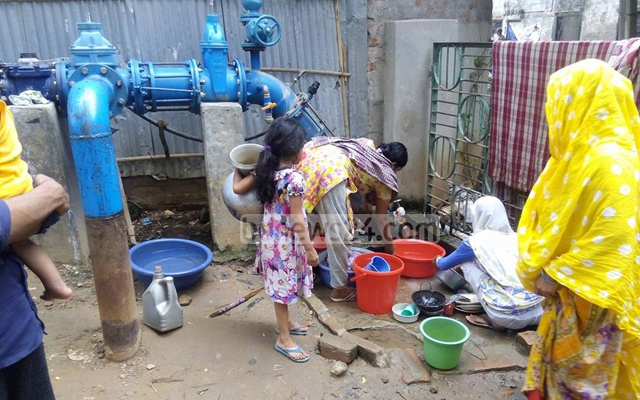 Almost cent percent households have access to safe drinking water from improved water source, and the percentage of households using illegal source of water has decreased to only 1.7 per cent from 33 per cent following implementation of ‘Promoting Environmental Health for Urban Poor’ (PEHUP), project over the last five years.
More than 80 per cent of households have also started using improved hygienic latrines, and over 88 per cent people have come to the practice of washing their hands with soap after defecation, after being advised under PEHUP project.
The project was implemented in 170 slums in Dhaka, Khulna and Chittagong cities for improving Water, Sanitation and Hygiene (WASH) status of the low income communities.
These achievements were informed at a dissemination event organised by WaterAid Bangladesh at Bangabandhu International Convention Center to showcase the experiences and learning gathered from the five-year-long project implemented from November 2011 to June 2017.
To support the project’s local level activities, four national NGOs – Dushtha Shasthya Kendra (DSK), Concerned Women for Family Development (CWFD), Nabolok, and Association for Realisation of Basic Needs (ARBAN) aided the WaterAid.
Planning Ministry Secretary Zuena Aziz, Member of Physical Infrastructure Division and Planning Commission attended the event as the chief guest while NGO Affairs Bureau Director General
Khandakar Rakibur Rahman and Charge the Affairs of the Embassy of Sweden in Dhaka Anders Ohrstrom were present as special guests.
WaterAid Bangladesh Country Director Dr Md Khairul Islam in his welcome address said: “The indicators with which we evaluate the status of water, sanitation and hygiene situation are better in rural areas than urban’s. And, the challenges we came across are more in city areas than the rural. But, one thing I would like to mention that by the help of the government, by 2030 we will have overcome the challenges and the situation will have been far better than now.”
“Had I not come over here, I could not have been informed how wonderful works the WaterAid is doing. I visited many districts in the country and I am very much impressed seeing the developments there,” NGO Affairs Bureau Director General said.
Anders Ohrstrom expressing his satisfaction to the activities of WaterAid Bangladesh, said, “Our government is concerned as to the poor sanitation and water management system in the developing countries; we donate 6 million US dollar every year to WaterAid, and I am much too impressed visiting some areas of Dhaka city. Now, people are very aware of sanitation, drinking safe water, and even women are also conscious of hygienic menstruation.”
Zuena Aziz, Secretary/Member, Physical Infrastructure Division, Bangladesh Planning Commission, shares, “We always include NGOs, local government and civil society representatives while making long term plan and I always emphasize on awareness building among the slum dwellers, because awareness makes people active and help to run the initiatives taken by government or NGOs.”
Mentionable, the authority concerned kept an ‘Open Discussion’ session where mayors, councilors, representative or responsible of the projects, journalists and victims engaged in sharing their respective opinions.