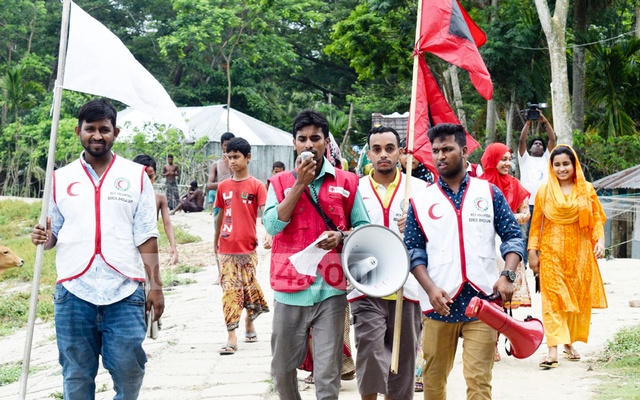 The people of coastal area of three southern upzilas have come under the scheme with the rise of sea level. Upazilas are in Dumuria in Khulna, Sharanchkhola of Bagerhat and Keshabpur of Jessore district. In these three upazilas, the people of 82 villages of 42,135 families of the upazilas have been able to achieve their effectiveness in reducing the risk of all types of disaster risks. Even the residents of this region identify themselves as risk learning methods and that has succeeded in many cases.
AHM Anwar Hossain, engineer of United Purpose (NGO), Khulna office, said the people of these areas are working with water management and livelihood to face their risk. The local community has decided to do the work and implemented. As a result, the risk of disaster has decreased, on the one hand livelihoods have improved and the community’s capacity has increased. Now more than ever, the population of these areas has achieved much more efficiency in dealing with disaster. They are now able to save their resources and facilities from flood surge and water logging. Farmers have been able to raise their income.
In addition to climate change, 42,135 families of Khulna, Jessore and Bagerhat districts have benefited under the coastal people assistance project of them 40 per cent people are landless. Under the project, cultivating new varieties of crops, vegetables in the house, construction of infrastructure and capacity building have played an important role.
Under the project, 146 community disaster management organizations, 35 water management groups and 60 service providers have been formed. Regular meetings are being held comprising Community Disaster Management Organisation and Water Management Group.
Under the project 135 groups of Voluntary Groups have been formed in each union and trained on reducing their disaster and risk, fire extinguishing, rescue and primary treatment. Now they are able to establish themselves as capable volunteers, said Sagarardi union Volunteer Monira Khatun.
According to Shahinur Islam, coordinator of the project implementing organisation ‘Shelter Foundation’, he said, so far, 4.6 km embankment, nine sluice gates, 1.7 kilometre drainage canal was renovated and 2.5 km micro dam has been constructed under the project. Apart from water logging, 42 acres of uncultivated land has been brought under cultivation.
Farmers have set up 509 exhibition farms, of which 80 per cent of the farmers have been benefited by spending own sources. Out of 3,052 people, 40 per cent women and their income raise 15 to 20 per cent. These new farms have been cultivated for the environment.
Project managing director of United Purpose Md Masud Rana said that the project has started in January 2015 and will be completed by January 2018.

On the road to digitisation