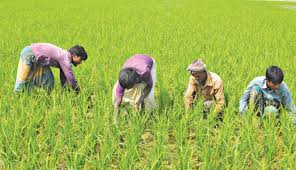 The farmers in Rangpur region have taken vigorous attempts to recover the crop loss to the recent flooding by bringing in more land under Transplanted Aman (T-Aman) rice planting, reports BSS.

With the increased acreage, Department of Agriculture Extension (DAE) officials at the divisional headquarters here are upbeat about bright prospect of bumper production of T-Aman rice, which meets half of the demand for staple food-grain in this northern division.

The government has fixed a target of bringing over 5.26 lakh hectares of land under T-Aman cultivation to produce 14.59 lakh tonnes of rice in all five districts under Rangpur division.

“Farmers in Rangpur division have brought over 5.93 lakh hectares of land under T-Aman cultivation, exceeding the target by 66,797 hectares or 12.68 percent,” Deputy Director of the DAE Md Moniruzzaman said. He said the higher acreage coupled with existing favourable weather conditions would also help farmers get more crop and minismise their crop loss to flooding.

Regional Additional Director of the DAE Md Shah Alam said the recent visit of Prime Minister Sheikh Hasina to flood-hit Dinajpur, Kurigram and Gaibandha and distribution of Aman seedling by her highly encouraged flood-affected farmers to exceed farming target of T-Aman crop in this region.

Besides, the lucrative price of around Taka 1,000 per mound of paddy inspired farmers to cultivate the crop on more land, including highlands.

The DAE, he said, also distributed late variety Aman seed among 350 farmers and seedling prepared on 51.15 acres of land among 3,100 flood-hit marginal farmers in the region so they could grow more rice.