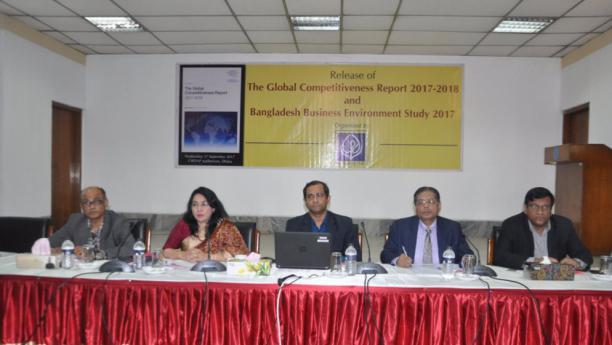 Bangladesh has been ranked the 99th most competitive economy in the world, up seven notches from last year’s ranking, on the World Economic Forum’s Global Competitiveness Report 2017-18.

This is the highest ranking for Bangladesh since the index was introduced in its current format in 2004.

“We have been talking about the potential of Bangladesh to achieve double digit ranking. And for the first time, Bangladesh has entered the club of top 100 competitive countries,” said Khondaker Golam Moazzem, research director of the Centre for Policy Dialogue, while unveiling the report.

CPD, as a partner of WEF, unveiled the latest report in Bangladesh at a press briefing held at the CIRDAP auditorium.

“The country has done better in infrastructure and institutions and this is one of the main reasons behind the improvement in overall score and rankings,” Moazzem said.

Bangladesh’s ranking and score in the institutions pillar shot up from 125 to 107 this year. While the improvement is encouraging, Bangladesh still scores low in the rankings, he said.

In fact, the report identified inadequate supply of infrastructure as the most problematic factor for doing business in Bangladesh — second only to corruption.

“Inefficient government bureaucracy is becoming a growing tension,” Moazzem said, citing that it was the third most problematic factor this year, up from last year’s fourth spot.

Little change has been discerned in financial market sophistication, technological readiness, higher education and training, and labour market efficiency, this year, he said.

Inadequately educated workforce and poor work ethic at workplaces are the other two pertinent problems.

“Surprisingly, poor work ethic has emerged as a new form of constraint. Lack of dedication, hard work and commitment among a large section of the new entrants to the young labour put constraints on businesses to grow.”

The Bangladesh chapter of the report has been prepared based on executive opinion survey among 85 companies, mostly local. The survey was carried out between February and May, according to CPD.

The report also found that Bangladesh has been a laggard in technological readiness even though its position has improved.

The use of ICT as a business tool is yet to get popularity. “Rather, the perception shows some deceleration.”

“Bangladesh is still at the nascent stage in case of creating IT-enabled business environment. The way we do business, that will become obsolete in the coming days.”

The report ranked a total of 137 countries and Switzerland came first, followed by the US and Singapore. 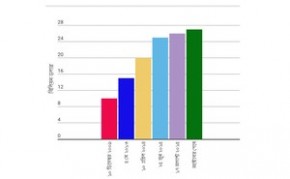