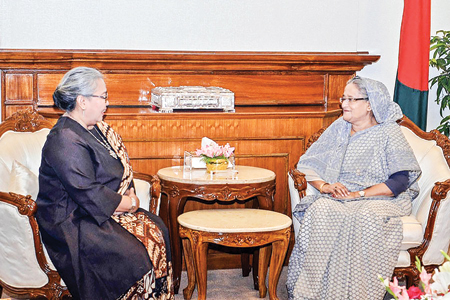 The government of Indonesia is keen to establish a 1600 mega watt (MW) LNG (liquefied natural gas) – based power plant in Bangladesh, Indonesian Ambassador to Bangladesh Rina Prihtyasmiarsi Soemarno apprised to the Prime Minister Sheikh Hasina of her country’s desire on Tuesday.
Jakarta wants to develop economic partnership with Dhaka as Indonesia is eager to be engaged with Bangladesh in joint venture initiatives in various sectors like pharmaceutical industries, the newly appointed Indonesian Ambassador told the Prime Minister during a courtesy call.
Newly appointed Indonesian Ambassador called on the prime Minister at Prime Minister Office (PMO). Senior PMO Secretary Suraiya Begum was present on the occasion.
During the meeting Prime Minister put emphasis on further developing economic partnership between Bangladesh and Indonesia and said it would be better to strengthen cooperation between South Asia and South East Asian regions, said Prime Minister’s Press Secretary Ihsanul Karim while briefing reporters after the meeting.
Terming Prime Minister Sheikh Hasina as a shining beacon, Rina Prihtyasmiarsi Soemarno said Indonesia has many things to learn from Bangladesh about development in various sectors.
The Prime Minister said her government has taken steps to establish 100 economic zones in the country where investors from both home and abroad can make their investments.
Raising the connectivity issue, she mentioned the BCIM (Bangladesh-China-India-Myanmar) and BBIN (Bangladesh, Bhutan, India, Nepal) initiatives in the south Asian region and said these are beneficial for economic cooperation.
The P:rime Minister also sought Indonesian investment in the economic zones for the mutual benefit of the two countries.
The Ambassador also mentioned that the Indonesian investment in Bangladesh is growing and stressed the need for establishing direct air link between the two countries as well as taking steps to set up industries in joint venture.
She informed the Prime Minister that Indonesia is already manufacturing 50-seat aircraft.
The new envoy said Bangladesh and Indonesia have been maintaining economic and friendly cooperation between the two countries since the establishment of diplomatic ties in March 1972. 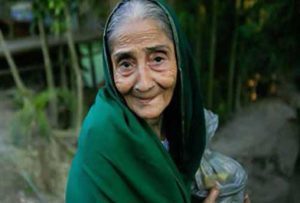