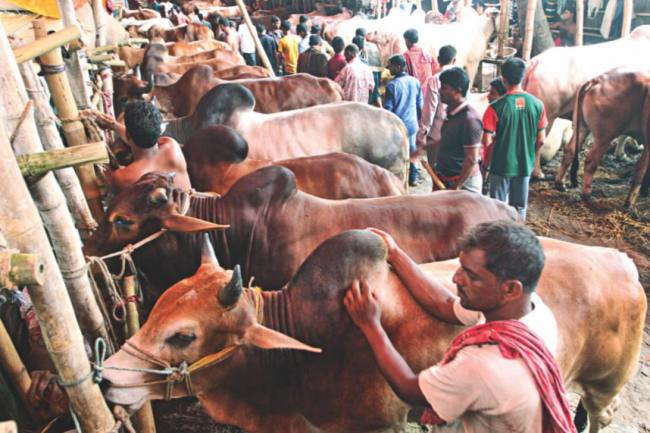 From Friday, Md Yusuf has put up machetes and various knives on display in front of his tiny blacksmith store at Karwan Bazar.

These are not the usual items that Yusuf sells. They have been added to tap into the surge in demand for meat-processing paraphernalia every year ahead of Eid-ul-Azha, one of the biggest religious festivals in Bangladesh.

“All year round we wait for this occasion to come,” said the 40-year-old blacksmith, adding that he rakes up half of his annual sales during the time of this festivity.

The blacksmith’s excitement is shared by the entire cottage industry surrounding Eid-ul-Azha, when the economy gets a boost from cattle purchase and transport of festivalgoers.

Blacksmiths in Karwan Bazar of Dhaka are hard at work forging knives and other tools. The photos were taken yesterday. Photo: Sohel Parvez
“This is an important event from a macroeconomic perspective,” said Zahid Hussain, lead economist of the World Bank’s Dhaka office.

The size of the Eid-ul-Azha economy is believed to be about Tk 35,000 crore, of which Tk 30,000 crore alone comes from cattle sales.

The festival also brings a bonanza for bus and launch operators as well as for commodity traders. The event also fuels a demand for refrigerators and freezers, according to electronics marketers.

Above all, the festival ensures the supply of half of the annual requirement for raw materials for the country’s second biggest export earning sector: leather and leather goods industry.

The Department of Livestock Services said the country has a stock of 1.15 crore of cattle, including 44.57 bulls. Of them, 33.42 lakh were fattened by 5.22 lakh farmers in the countryside eyeing Eid-ul-Azha.

“This plays a vital role in the growth of the livestock sector,” Hussain said.

Animal farming accounts for 1.60 percent of Bangladesh’s nearly $250 billion economy. The sub-sector of agriculture grew 3.32 percent last fiscal year, according to the Bangladesh Bureau of Statistics.

“Eid has a significant impact on poverty reduction because of redistribution of income. We also see increased flow of cash transfer from urban to rural areas during this festival as farmers get money from selling reared cattle.”

However, farmers do not get the full benefit because of extortion on the way.

“It reduces the redistributive gain,” Hussain said, while calling for improving governance and reducing the engagement of middlemen in the supply chain.

Cattle traders, hide merchants and tanners said the number of animals slaughtered during Eid–ul-Azha is increasing every year thanks to a rise in purchasing power brought on by more than 6 percent annual economic growth.

Delwar Hossain, chairman of the Bangladesh Hide & Skin Merchants Association, is expecting a spike in the number of cattle slaughter this year from the last.

One of the reasons being the national election that is scheduled for 2018: potential candidates may spend more in their constituency to impress their electorate by feeding them well this festival.

Khondaker Golam Moazzem, research director of the Centre for Policy Dialogue, said the number of cattle slaughtering will rise this year in line with the increase in purchasing capacity.

Md Shaheen Ahamed, chairman of the Bangladesh Tanners Association, said the number of cattle slaughtering will decline this year because of a fall in the purchasing capacity of many people because of the ongoing flood up north.

This sentiment is reflected in the customer turnout so far in the Gabtoli cattle market, the biggest in the country. “It is not encouraging,” said Mohammad Amzad Hossain, general secretary of Gabtoli (Dhaka) Cattle Traders Cooperative Ltd.

It is the same scenario over at Kawran Bazar, where Yusuf managed to sell only two machetes until yesterday evening, which is far below his expectation.

He too is afraid that flood might affect his selling prospects this year.

“I am still hopeful. The main sales take place in the last two days before Eid.” 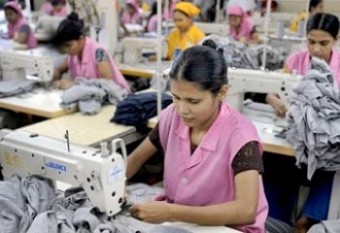