Asking the industry owners and workers to maintain good relations for mutual benefits, Prime Minister Sheikh Hasina on Sunday called for exploring new export markets as the traditional markets are not in good shape now. Asking the workers to stay away from troublemakers she said,

“The recent economic condition of the traditional markets is not good for which the export in some cases has been on downtrend. Those who will find out new markets, their items will get special incentives,” she said.

The Prime Minister was distributing cheques of compensation to the heirs of dead workers and to crippled workers of RMG sector from the central funds of Labour and Employment Ministry at her office.

Sheikh Hasina said, “We’ve to find out in which country we can export our items in the future and what type of items they need.” She mentioned that neighbouring countries could also be good destinations for export items as they have their own huge market. The Prime Minister also asked the owners and workers to maintain good relations for their mutual benefits.

“Obviously you (owners) will make profits…you’ve given attention to the workers for their welfare, this have to be continued because these people (workers) run your industries, whatever you earn that comes in lieu of their sweat, you must remember that all the time,” she said. Hasina also asked the workers that it is their responsibility to take care of the industries in which they are working as this provide their butter and bread and accommodation.

“You also must be careful so that there shouldn’t be any kind incident in the industries provoked by outsiders,” she said. The Prime Minister said there are some people in the country who work for NGOs and time to time become labour leaders. “They try to create turmoil to take share from workers…you must stay away from these elements,” she said.

Sheikh Hasina said the aim of her government is always to ensure welfare of the workers. “We’ve taken steps to resolve all the problems, if any, through discussions among the workers, owners and government.” State Minister for Labour and Employment Mujibur Huq Chunnu and BGMEA President Siddiqur Rahman also spoke at the programme. unb 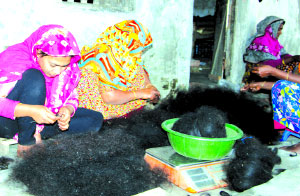