নীড় উন্নয়ন Tale of freedom, tale of joy at enclaves

Shykh Seraj talks with a woman at a former Indian enclave in Debiganj upazila of Panchagarh. The enclave, like scores of others of the kind, were attached with Bangladesh, following an exchange deal with neighbouring India two years ago. PHOTO: Hridoye Mati O Manush
Shykh Seraj
Dear readers, a few days back I went to a former Indian enclave in Panchagarh’s Debiganj. The dwellers there became independent only two years back. Even after living on a land, they didn’t have a country of their own. You already know there were 36 enclaves in Panchagarh, six of which in Debiganj. Many of you know about the enclaves of India and Bangladesh. Now, everyone of this area is having the taste of independence. In Bangladesh’s 46 years of independence, this is one of the biggest of all achievements of the government and people.

I went there to see how they’re living and what their dream is. What the expectations from their own land, Bangladesh, are. How they are building themselves.

Their world changed in a moment. Only two years have passed since then. Unstoppable tide of development and dream entered the old enclave areas. As many as 111 enclaves of India were inside Bangladesh and those comprising a total of 17160.63 acres of land came under the ownership of Bangladesh. These lands were in Bangladesh’s Lalmonirhat, Panchagarh, Kurigram and Nilphamari districts. There were 41, 449 residents on those lands. After they got their own identity, lives and views of the people living there changed dramatically. They became confident. From students to service holders to homemakers and elders, change is vivid. They are Bangladeshi.

I was talking with a local man, Jabbar Mia about his new experience of becoming a Bangladeshi.

“We feel like we have achieved freedom,” said Jabbar.

“Now, we have electricity and other facilities from the government. What more could we have?” he added.

“What else did you get from the government?” I asked him.

“Infrastructural developments that are going on,” Jabbar replied.

“How about schools?” I asked him again.

“Yes. We have high schools. We will soon have a college as well,” he replied with great contentment.

They didn’t have any shelter, any national ID. Nobody valued them before. Even they couldn’t do any paper works for marriage. They used to face many problems.

“Now, we are independent people in Bangladesh. Just like what Bangladesh achieved in 1971, we have achieved that now,” added Jabbar with great joy.

Kashem, a local farmer from Debiganj who could never imagine about any help or support, now confidently says that he is doing well. Stories of his success are fascinating to listen to.

“We didn’t use to get fertilizers and other agricultural inputs.

Thus, we were not able to cultivate any crop. Now, we can do plenty of cultivation as we are getting all the facilities and subsidy,” says Kashem.

Many others said along with electricity they now have tube-wells provided by the Bangladesh government.

Saber talked about an issue which really had taken place frequently in the past.

“I secretly admitted my son to a school giving fake names of parents during the days we were not completely liberated,” says Saber.

“Now, you are saved from doing all this, aren’t you?” I asked.

“Yes, now it’s fair and we have legally admitted our son,” Saber replied.

“Now, you are experiencing the real essence of a citizen of an independent country. How do you feel now?” I asked Saber.

Freedom changes one’s views. It brings a different rhythm into a life. This is what a man named Chanka shared with me.

“We were in a lot of suffering. We didn’t use to get any support from outside. By the grace of Almighty, after the enclave issue was resolved, we started getting plenty of facilities and support,” says Chanka.

When Babul first saw Bangladesh’s flag in the enclave, he understood he along with others will have a fresh start from then on.

As I walk on the paths of the former enclave, I can sense the free and independent township. People are now greatly spontaneous. It is obvious that they are now free from long suffering and enjoying the taste of independence.

I talked with some students of Gajirhat High School.

“Did you get the books for this year?” I asked the students.

“Yes,” they replied happily in chorus.

“Very good. Tell me, what do you want now?” I asked them.

“We want our school to develop and get scholarship from here,” they replied.

“I am in the 8th grade of this school. It was horrible before. We never imagined that it would develop so much. We are really happy with our current state,” says Monira.

“What do you want from the government now?” I asked Monira.

“To be able to enjoy all the government facilities,” replied the talented Monira.

During the past two years, 17 academic institutions were established here. However, most of them are yet to receive government approval. Therefore, students and teachers are still going through some problems. The teachers are working hard but some of them are not getting salaries yet. This is what the headmaster of Gajirhat High School said.

Chairman of the local union parishad, Golam Rahman, says lot of development works are going on and things will change here gradually, not overnight.

Behind Hajiganj High School, a community clinic has been established on a temporary basis. The people of this area, who were deprived of medical treatment for ages, now come here for it. Rehana Parveen, an educated young lady of this area, is working here as a volunteer.

“What kind of treatment services do you provide?” I asked Rehana.

At the greater enclave area, 11 cluster villages have already been established. A female resident, Reshma Begum, took me to her home. Reshma now has a home with almost all household facilities. She’s a tailor and also does some household farming.

Reshma Begum talked to the honourable Prime Minister through a video conference on behalf of the women of the enclave. That was a historic event for the people of the cluster village. I had a little chat with her.

“How many families were given homes by the government in this cluster village?” “30 families,” she said.

“Where were you before?”

“I was a resident of the enclave.”

“Did you have your own home?”

These people are feeling the real essence of a new country and freedom. Dreams are playing in the minds of every one in every house. They want the government to solve all the problems as promised. And, they also thank government for the way development works have taken place so far. On the 2nd anniversary of enclave exchange, I wholeheartedly greet all the citizens residing in these localities. 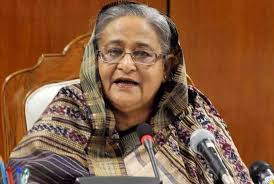