RP Saha and his son, Bhabani Prasad Saha, were abducted by the Pakistan Army and their collaborators on May 7, 1971. On this day, we remember this great soul who made enormous sacrifices for the wellbeing of his countrymen.
The legacy of RP Saha
RP Saha with his son and daughters.
Md Golam Kibria
Philanthropy is derived from the Greek words “philos” which means loving and “anthropos” which means humankind. Philanthropy stands to improve the wellbeing of humankind by preventing and solving social problems. If we go through the life history of Ranada Prasad Saha, we will find a true philanthropist in him.

Philanthropist Ranadaprasad Saha, popularly known as RP Saha, was born in 1896 at Mirzapur village of greater Mymensingh. His father, Devendranath Podder and mother Kumudini Devi were very happy to see the baby born in a very auspicious time according to Hindu mythology. But when the boy turned seven, his mother died due to a lack of medical facilities in their remote village. This experience had far-reaching effects on his later life and it changed his outlook on how women were treated in society.

It also persuaded him to find ways of making women self-reliant socio-economically and provide the poorest of the poor in society with proper medical facilities so that no one else would have to face the same fate as that of his mother. He was determined to find solutions to the helplessness of his country and fellow countrymen from different walks of life.

After his mother’s death, he was sent to his maternal uncle’s home for schooling but it did not last long. At last, he reached Calcutta when he was about 12 years old. There, he worked as a day labourer, hotel boy, newspaper hawker, etc., to earn a living. To his good fortune, he came to know quite a few kind and noble people through his honest and honourable character, which helped him materialise his cherished dreams. During this time, he became a political activist striving for the freedom of his nation and was arrested by the police and held as a political suspect for a few days.

Great Britain joined the First World War on August 4, 1914. It was a political decision made by the Indian leaders to support the colonial regime. So, on February 25, 1915, the Bengal Ambulance Corps was formed. RP Saha was recruited and joined the 16 Rajput Regiment on April 1 at Alipur cantonment. On June 26, his corps was set to go to Egypt. RP Saha was determined to prove that his countrymen were not cowards and had fight in them.

On April 29, 1916, the British Army had to surrender to the Turkish Army at Kut-El-Amara. Members of the British Brigade and the Bengal Ambulance Corps were sent to Baghdad as prisoners of war. There, the Ambulance Corps had to maintain a hospital for treating the wounded soldiers.

On June 27, 1916, the hospital caught fire from a nearby explosion. RP Saha risked his own life to save around 20 wounded soldiers from the blazing inferno. It was so courageous that his commanding officer wrote a comment in his service book, “On the occasion of magazine explosion near the hospital, he remained cool and worked hard being of the last to leave the hospital.”

On September 26, 1916, RP Saha was freed from Turkish custody through a prisoner exchange programme and returned to Calcutta. He was given a heroic reception at the Calcutta Railway Station. RP Saha decided to join the Bengali Double Company which was upgraded to the 49th Bengal Regiment. There he was commissioned as an officer in the Indian (Viceroy) commission in February 1918.

In 1919, he was invited by the king to join the peace celebration in England. During the celebration he was given the sword of honour and citation of the king which glorified his regiment and made his nation proud. His legacy will remain forever in our military heritage.

On August 30, 1920, his regiment was decommissioned and RP Saha started another glorified chapter in his life. Through his hard work, discipline and management skills he became a leading businessman. As per his predetermination he founded the Kumudini Welfare Trust of Bengal (Bd) Ltd. named after his mother.

He also established the Kumudini Women’s College in Tangail and the Devendra College in Manikganj during that period. He helped fund the establishment of the Huseyn Shaheed Suhrawardy College in Magura. Many educational and socio-cultural organisations flourished because of his contributions.

On May 7, 1971, during our great liberation war, RP Saha and his son were abducted by the Pakistan Army and their collaborators from the head office of the Kumudini Welfare Trust in Narayanganj. The days that followed were agonising for his family members and others close to him. But it could not stop the work of the trust even for a day. RP Saha’s youngest daughter, Joya Pati, took an oath and did everything to bring her father and brother back. But every effort spent was in vain. RP Saha and his son sacrificed their worldly wealth for humanity and their motherland.

Kumudini Welfare Trust is still running its institutions according to its founder’s philosophy and doctrines.

Today, May 7 is the abduction day of RP Saha and his son, Bhabani Prasad Saha. Let us observe the day with due solemnity. May their souls rest in eternal peace. 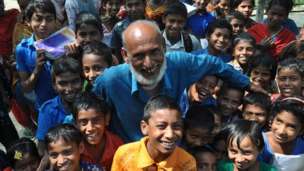