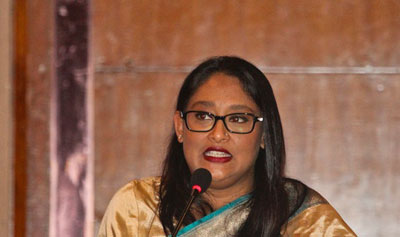 Saima Wazed Hossain, who spearheads the mental health campaign, including autism in Bangladesh, has been designated as ‘WHO Champion for Autism’ in South-East Asia Region.

Announcing her name before the World Autism Awareness Day on Apr 2, the UN health agency on Saturday said as WHO Champion, she will be supporting its “advocacy” with the 11 member countries of the region for inclusion of the issue in national policies and strategies.

This is to promote WHO’s mental health initiatives and strengthening research and evidence of Autism Spectrum Disorder, ASD, for more focused interventions to address the suffering of children with the disorder, as well as their parents and caregivers.

It introduced her as a “strong advocate” for autism.

“Ms Hossain’s dedicated and unprecedented efforts have put autism high on the health agenda in her country Bangladesh, and helped get substantial regional and global attention to autism spectrum disorder and other mental and neurodevelopmental disorders,” Regional Director Dr Poonam Khetrapal Singh said.

“Her support as Regional Champion is expected to garner momentum for awareness and action in member countries, as much remains to be done for autism in across the Region”.

Hossain, better known by her nickname Putul, is Chairperson of the National Advisory Committee on Autism in Bangladesh, and also Shuchona Foundation that works on mental health issues. She is also a member of WHO’s Expert Advisory Panel on mental health.

Daughter of Bangladesh Prime Minister Sheikh Hasina, she is an US-licensed school psychologist.

She brought the neglected issue to the fore by organising a regional conference in 2011 where regional leaders, including India’s then ruling Congress Party chief Sonia Gandhi participated.

As a result of her efforts, the Neurodevelopmental Disability Protection Trust Act 2013 has been passed. The United Nations adopted several resolutions based on her proposals.

WHO also awarded her in September 2014 with ‘Excellence in Public Health Award’, noting that she had put autism on WHO’s map. She is also a member of the WHO expert panel on mental health.

Designating her Champion in the region, WHO on Saturday said among the Region’s 11 countries, Bangladesh has made “focused interventions for autism and much of the pioneering work has been initiated by Hossain”.

It listed few of those initiatives that include the Ministry of Health’s integration of mental health care into primary health care.

ASD and other neuro-developmental-related disorders have been integrated in the Health, Population and Nutrition Sector Development Programme of the government. An Institute of Neuro-development and Autism has been established, while 10 medical colleges have a special wing to screen childhood disability.

She has made “important contributions” to the Regional and global efforts on ASD in her various roles and capacities.

She launched the South-East Asia Autism Network in July 2011 and is a member of WHO’s global Expert Advisory Panel on Mental Health.

She is the founding member of the Mental Health Accessibility Task Force of the Ontario Psychological Association, Toronto, and an international advocate for autism and neurodevelopmental disorders for Organization for Global Autism Bangladesh.

Autism appears in the first three years of life and affects the brain’s normal development, hampering social and communication skills.

Those who suffer cannot pick up self-care tasks – dressing, self-feeding, using toilet and others – by watching and imitating. They do not make eye contact and have a single-track thought process.

But due to lack of trained manpower, many countries, particularly the developing ones, miss early diagnosis, aggravating their sufferings.

Globally, autism prevalence rates are estimated at 160 cases in a population of 10 000, or one in 62 children.