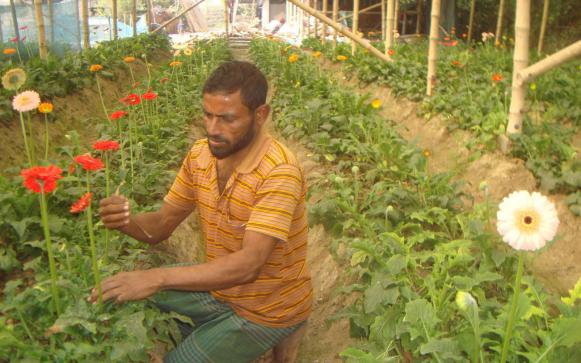 Offering a bold burst of colour in elementary design, the gerbera flower from the daisy family is a lesson in the genius of simplicity. It’s little wonder that gerberas have come to symbolise innocence, purity and cheerfulness. In Magura the world’s fifth most popular flower according to sales is bringing its promised joy to growers too, who are making good profits.

Also commonly known as the African daisy, a gerbera species from South Africa was first scientifically identified in 1889. Since then gerberas have been catalogued in natural habitats across the tropical regions of Africa, South America and Asia; the flowers have become a regular adornment to household gardens in many parts of the world. In Magura, gerbera production for the cut flower market is entering its sixth year.

“We buy the seedlings from Gadkhali Bazar in Jessore,” says gerbera farm manager Abdul Aziz. “It’s best to plant them between October and January, and to give water sparingly since excess water will damage the seedlings.” Gerberas are best grown in shade, such that roof cover of plastic sheet and bamboo is a feature of the farm.

“Including labour and transport expenses, each seedling costs Tk 180,” he says, which is relatively expensive for a crop, but the corresponding profits make it worthwhile. “Per bigha of land we plant 600 seedlings and each plant should produce 365 flowers per year, with a plant’s lifespan being about four years. We sell the flowers for up to Tk 12 per piece, which means that annual sales reach around Tk 2.19 lakhs, much more than the Tk 60,000 or so one might expect from traditional crops.” Each gerbera starts to produce flowers about three months after being sown.

Gerberas are available in white, yellow, orange, red, and pink. The same flower can have several petals in different colours and there is even a black flowering variety. They are not overly difficult to cultivate. “I use compost fertiliser, potash and triple super phosphate to tend the flowers,” advises the farm’s caretaker Ashadul Islam.

The farm’s owner Nurul Alam Khan Selim, who resides in Dhaka, says that he used to work in the banking sector in France and Sri Lanka for about thirty years. “After my retirement I decided to cultivate a quality and rare flower species. It’s costly but profitable.” He hopes to extend his farm in the near future.

According to local horticulture advisor Aminul Islam, gerbera flower cultivation is proving popular among Magura farmers. “Some farmers are trying to collect the plant,” he says, “It’s a highly profitable endeavour to grow them.” As such, he predicts gerberas will cover even more Magura farmland in the years to come.