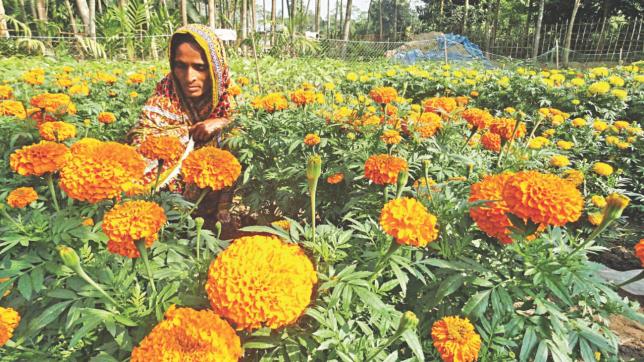 Roses, daisies and marigolds: Asma Begum’s garden in Fulgachh village of Lalmonirhat’s Mogholhat union blooms not only of beauty but of success. In the wafting aroma of flowers the enterprising mother-of-four found funds for her children’s educations. In delicate petals she discovered solvency.

When Asma first picked up a shovel a decade ago to plant flowers beside their family home, few could realise how the decision would change their lives.

Asma’s husband Fakar Ali used to be a day labourer, earning at best Tk 150 per day. His income was hardly sufficient to cover the living costs of a six-member family and Asma was frustrated.

“I established our flower farm with help from my husband,” she recalls. “It started on our one bigha of land but five years ago we purchased another two bighas and I have rented two more from our neighbour. The garden covers five bighas altogether.”

After establishing her garden, Asma managed to complete two months’ training on flower cultivation with a non-government organisation and subsequently took a small loan which enabled her to extend the farm. These days the garden earns the family up to Tk 7,000 per day from selling flowers during the winter months, providing a steady daily income of around Tk 1,200 during the off-season.

“The winter is especially busy,” she says, “But my husband and our four children help to ensure we get the best results.” Meanwhile her children are also busy with their school and college study. The eldest two, Mabiya Akhter and Asadul Islam, are each completing a Bachelor of Arts, while Masuda Akhter is in Class IX and Shanto Islam, the youngest, is a student of Class VII.

“We spend our leisure hours helping with the flowers,” says Asma’s son Asadul Islam. “We’re never idle.” Asma’s sons have also taken on the responsibility of selling the flowers in the town.

Jahedul Islam, a flower trader who runs his business at Mission Intersection in Lalmonirhat town, is among those who purchase flowers from Asma’s garden. “Asma Begum is very energetic,” he says, “She works hard and is serious about developing her business.”

According to Lalmonirhat Sadar Upazila Agriculture Officer Enamul Haque, Asma is an inspiration to others. “Many locals have begun commercial flower farming after seeing her success,” he says. “We provide as much support and encouragement for the area’s flower farmers as we can, because flowers have ready demand and prices are favourable.”

Meanwhile in Fulgachh, Asma’s family has garnered a reputation for being one of the best managed in the village. Locals have seen how, where there used to be one tin-shed house on their land there are now four. They too can nowadays find in the colour and fragrance of her flower fields the very same dreams of solvency that first attracted Asma.

“We also produce some spices and fruits in our nursery to keep us going throughout the year,” adds husband Fakar Ali.