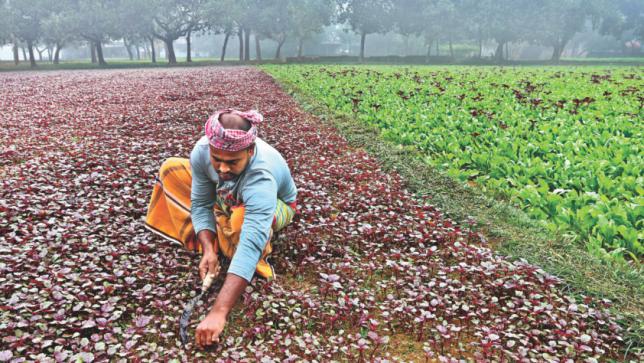 Production doubles in a little over a decade; experts put it down to quality seeds, policy support, technology; per capita consumption still low
[Veg output grows fast] A farmer tends to red amaranth in his field in Savar on the outskirts of the capital. Vegetable production in the country has greatly increased over the last one decade. The photo was taken recently. Photo: Amran Hossain
Reaz Ahmad

Vegetable production has more than doubled in just over a decade, making Bangladesh one of the fastest-growing vegetable producers in the world.

The growth in recent years stems from better seeds and technologies as opposed to the growths in the 80s and early 90s when more agro land was dedicated to vegetable farming.

With rice and other cereals occupying over 75 percent of the country’s 8.5 million hectares of arable land, the land for vegetable cultivation is shrinking.

And yet, its production is growing thanks to policy support, farmers’ adoption of hybrid seeds, home gardening and cultivation of off-season and all-season vegetables, experts said.

Another reason for this boom is that farmers get a higher return from vegetable farming than that from the low-incentive rice production.

The United Nations Food and Agricultural Organisation (FAO) credited Bangladesh for posting the highest year-on-year increment in vegetable production after Uzbekistan and Nepal during the first decade of the 21st century.

Experts, however, warned about the widening gap between vegetable production cost and the prices consumers pay. They blamed illegal tolls and middlemen’s profit-mongering for such a widening gap.

They said this would negatively impact further growth of the sector.

According to the Ministry of Agriculture and Department of Agricultural Extension, some 142 types of home-grown and exotic vegetables were grown in Bangladesh with the output hitting 14.34 million tonne from 0.8 million hectares of land in the last fiscal year.

Of the 14.34 million tonne, some 10 million tonne is just potatoes. Though classified as vegetable, potato is seen as starchy food like rice and wheat.

Bangladesh’s yearly vegetable output was 1.74 million tonne in 2003, according to the World Vegetable Centre.

“Still we’re lagging behind if you translate it into the level of per capita vegetable consumption. As against standard 220 grams a day, each person in Bangladesh is consuming 62 grams of vegetables a day [according the BBS data of 2015],” Shahabuddin Ahmad, immediate past director of Horticulture Research Centre, told The Daily Star.

For a land-starved country where most farmlands are occupied by rice, it is hard to expect growth in vegetable production from area expansion, noted Shahabuddin. He emphasised the need for changing the rice-centric dietary habit.

On the farm level, farmers sell vegetables at a fairly low price. But the prices spike manifold by the time they enter the urban markets, he said. “We [consumers] are paying but they [growers] are not getting the money because of illegal tolls in the whole chain.”

“Besides, farmers now can grow vegetables during off season and all seasons thanks to the development of varieties suitable for yearlong production,” said the BARI director, giving an example of BARI seem-7, a bean variety that can be grown during the summer.

“Increasing off-season vegetable production is part of the effort to diversify the rice-reliant agriculture in Bangladesh. Farmers who produce tomatoes, aubergines and other high-value crops during the hot and humid kharif season, traditionally when rice is grown, can see dramatic improvements in their crop output, land productivity, profitability, and net income,” said the World Vegetable Centre.

Shahabuddin said against 4,500 tonne of yearly seed requirements, local companies and public institutions meet 30 percent of the vegetables seed demand, 15 percent is imported while the rest are the seeds saved up by the farmers.

Some of the local well-known seed companies, like Lal Teer and ACI that used to import seeds, are now producing and marketing quality seeds at home and they have good research and development (R&D) hubs established too, experts noted.

Amid a huge outcry over hybrid seeds in the latter half of the 90s, the then government allowed import and local production of hybrid seeds, initiating a huge growth push in vegetable production, they recalled.

Different literatures published by the Taiwan-based World Vegetable Centre mentioned roles of non-government organisations like Brac and Hellen Keller International in the promotion and training in vegetable farming and home gardening.

Experts said farmers in the country now have the knowledge to utilise every available inch of land for growing vegetable. They just do not cultivate vegetables on plain land and during favourable conditions like they used to, rather they have the know-how of hydroponics, fertigation, terracing, roof gardening and floating gardens.

Hydroponics is a method of growing plants without soil, using mineral nutrient solutions in water solvent while fertigation is the injection of fertilisers, soil amendments and other water-soluble products into an irrigation system, and terracing in agriculture means cutting a slope into a series of successively receding flat surfaces for farming.

Display of a wide range of vegetables fresh from the farms, farming technologies, seeds and allied products at the recently held three-day National Vegetable Fair (January 5-7) at the city’s Khamarbari was just a manifestation of the growth Bangladesh’s farm sector achieved in vegetable output.

Many of these vegetables are rich in vitamins A, B, C, E and K, folic acid, calcium, phosphorus and iron.

5,000 farmers in Cox’s Bazar get incentives for Aus paddy farming