This visit of President Xi Jinping and the efforts undertaken by our government as well as the private sector will be lauded by posterity as a step that helped to create the necessary conditions for Bangladesh to emerge out of the poverty trap and take a firm stride towards greater development. The desired outcome will however only be possible if we can maintain stability within the country and if all factions work together with commitment, in a transparent and accountable manner, to promote our national interest, writes Muhammad Zamir

There is an excellent economic adage which has gained special currency throughout the world in this era of digitalisation and globalisation. It says: “Everything tastes better with butter and everything works better with growth”. The Chinese believe in this maxim and have proved it to be right over the last three decades. The connotation of this evolving dynamics has also not been lost on Bangladesh.

We believe not only in regional stability but also in geo-strategic partnership to further our own socio-economic development and economic growth. Over the last seven years during the present government we have seen a pro-active foreign policy that has targeted not only international peace and security but also focusing on becoming a sub-regional and regional partner with other countries in South Asia, South-east Asia and the Far East. Our participation in international conferences as an outreach partner has reiterated the precept that we are willing to engage with the partnership process. Our efforts in this regard within the Bangladesh, Bhutan, India, Nepal (BBIN) Initiative, the Bangladesh-China-India-Myanmar Forum for Regional Cooperation (BCIM) and the Bay of Bengal Initiative for Multi-Sectoral Technical and Economic Cooperation (BIMSTEC) as well as the South Asian Association for Regional Cooperation (SAARC) have underlined our commitment and drawn international attention towards Bangladesh. The presence of the Bangladesh Prime Minister as a representative member of BIMSTEC during the Brazil-Russia-Indis-China-South Africa (BRICS) Summit held in Goa, India on October 15-16 was consistent with this trend.

We need to view the recent visit of Chinese President Xi Jinping to Bangladesh from October 14-15 in this context. The last time a Chinese President visited Dhaka (Mr. Li Xiannian) was thirty years ago in 1986. In between we have had visits from three Chinese Prime Ministers, Mr. Li Peng in 1989 and 1999, Mr. Zhu Rongji in 2002 and Mr. Wen Jiabao in 2005. Mr. Xi Jinping also visited Bangladesh in 2010 in his capacity as the then Vice President of China. Prime Minister Sheikh Hasina has formally visited China several times – in 1996, 2000, 2003, 2010 and 2014. President Abdul Hamid has also visited China in 2014.

SEED OF FRIENDSHIP: The visit of President Xi to Bangladesh this time round has been crucial and different. It has elevated the dimensions of cooperation that exist between our two countries.

Before proceeding further I need to refer to the excellent article titled “China-Bangladesh cooperation will bear golden fruits” written by President Xi Jinping, that was published in Dhaka on October 14 to coincide with his arrival. It revealed the commitment of the President towards not only the upgrading of our bilateral relations but also acknowledging a sensitive aspect of our history – our struggle for independence during 1971. Many of us still remember the geo-strategic reasons that persuaded the then Chinese leadership to side with Pakistan and its version of our efforts during our War of Liberation. One sentence in President Xi’s article has removed that sorrow and disappointment from my heart. He has mentioned that “More recently, having endured repeated wars and incessant poverty, our peoples (China and Bangladesh) fought tenaciously for national independence and liberation, strove for development and progress and forged unshakable trust and friendship in the process”. He has then gone on to recall the role of Bangabandhu and mentioned that the “seed of friendship …planted by the veteran leaders of our two countries long before diplomatic ties were established has now grown into a giant tree with deep roots and rich fruits”. It is this aspect that has been reflected in the various agreements reached during his visit to Dhaka.

The Chinese President has gone on to remark that “The Sonar Bangla dream of national strength and prosperity is in perfect harmony with the Chinese dream of great national renewal”. He has followed this with an observation that “There is huge potential and complementarity in our cooperation. China is ready to synergise its 13th Five Year Plan with Bangladesh’s Seventh Five Year Plan with a view to leveraging our respective comparative advantages, increasing economic exchanges and trade, building key projects in areas such as infrastructure, production capacity, energy, electricity, transportation, information, telecommunications and agriculture.” From this point of view he has also reiterated the need for our two countries to enhance South-South cooperation for common development.

One can only welcome such an approach as a citizen of Bangladesh.

KEY AREAS OF CHINA-BANGLADESH PRACTICAL COOPERATION: The Joint Statement issued at the end of the visit of the Chinese President identified infrastructure, industrial capacity cooperation, energy and power, transportation, information and communication technology, human resource development and agriculture as the key areas of China-Bangladesh practical cooperation.

It was underlined that further development of bilateral relations would be on the basis of the Five Principles of Peaceful Co-existence and respecting each other’s choice of the paths of development according to national conditions and each other’s core interest and major concerns.

Attention was also drawn to the need to be consistent with the Framework Agreement for Developing Cooperation on Production Capacity. This was highlighted with particular reference to the expected production capacity of companies and financial institutions which were expected to play a pivotal role in the construction and operation of infrastructure, resource processing, equipment manufacturing, light industry, electronics and textiles, semiconductors and nanotechnology (required for the ICT sector) and industry clusters.

The two sides agreed to continue their cooperation on river management, including dredging with land reclamation. In addition, as expected, both China and Bangladesh reaffirmed their belief that there were extensive areas for cooperation in maritime affairs. This was obviously in reference to the latent Blue Economy potential of Bangladesh.

Both countries also agreed to intensify their efforts towards the implementation of 2030 Agenda for Sustainable Development. China, consistent with the paradigm of strategic partnership, agreed to strengthen cooperation with Bangladesh on tackling the effect of Climate Change and land reclamation from the sea. This was an instrumental facet that will be monitored very carefully by both Administrations, particularly now that China has ratified the Paris Agreement on Climate Change.

Training human resources and skill development have been discussed by both the sides as critical factors if the proposed future investment can be carried out efficiently and meaningfully.

There has also been discussion about the possibilities of expanding the matrix of renewable energy. Bangladesh knows that both Germany and China are leaders in this field. Consequently, our progress within this ambit could be greatly facilitated with Chinese partnership.

YEAR OF FRIENDSHIP AND EXCHANGES: Consistent with this positive approach, the two sides have agreed to observe 2017 as the “Year of Friendship and Exchanges” aimed at expanding cooperation in culture, education and tourism. Efforts will be made to promote interactions between the media, think tanks and non-governmental organizations (NGOs). This has been a constructive decision.

In keeping with Bangladesh’s stand of ‘zero tolerance’ with regard to terrorism, it was quite understandable that leaders of both countries not only condemned terrorism in all its forms and manifestations but also expressed their readiness to cooperate through sharing of information, capacity building and training, particularly with regard to cyber security- so essential in this digital age.

It is believed that this new proposed active profile within the strategic dimension of relationship between our two countries will assist in the implementation of the important role of BCIM Economic Corridor in promoting practical cooperation among the BCIM-EC countries and the development of the region as a whole.

Many Chinese companies have also signed trade agreements with different Bangladeshi companies for US $ 13.6 billion with regard to active involvement in agro-processed goods, leather, ICT products, frozen food, jute and jute goods, pharmaceuticals and the shipbuilding sector. Of the 13 Chinese companies two-thirds are state-owned and the rest are from the private sector. On the other hand, 11 companies from the Bangladesh side are from the private sector. The Federation of Bangladesh Chambers of Commerce and Industry (FBCCI) facilitated this exercise.

Bangladesh government and Chambers of Commerce hope that this will help boost the diversification of our exportable products, add quality and also reduce the growing adverse balance in our trade equation with China. It may be recalled that in fiscal 2015, Bangladesh exported only US$ 819 million worth of goods to China but imported goods worth US$9.65 billion from that country. Economists have pointed out that though China has agreed to import 4,762 different items from Bangladesh on a duty-free basis (most of which are not produced over here) there is still the non-tariff barrier with regard to ready-made garment (RMG) products which have to satisfy the requirement of 40 per cent Rules of Origin principle.

This time, during the visit, requests have been made for full duty-free facilities for all Bangladeshi products. This appears to be unlikely in the immediate future. However, if we can re-locate Chinese RMG and textile factories from China to the proposed Economic Zones to be set aside for China on a government-to-government basis and also on private sector initiative, this issue can be addressed more successfully. In that case we will be able to meet the Rules of Origin requirement and also benefit from the export of locally produced goods to the growing consumer community in China.

In addition, such re-location of manufacturing industry in the electronics, digital and transport manufacturing sectors will enable us to produce high end products that we can sell to countries where we presently enjoy duty- and quota-Free access facility as a least developed country (LDC). We must not forget that we will lose this advantage once we become a middle-income country. Chinese cooperation from now will help us to prepare for the rigours of being a middle-income country in the future.

This visit of President Xi Jinping and the efforts undertaken by our government as well as the private sector will be lauded by posterity as a step that helped to create the necessary conditions for Bangladesh to emerge out of the poverty trap and take a firm stride towards greater development. The desired outcome will however only be possible if we can maintain stability within the country and if all factions work together with commitment, in a transparent and accountable manner, to promote our national interest. 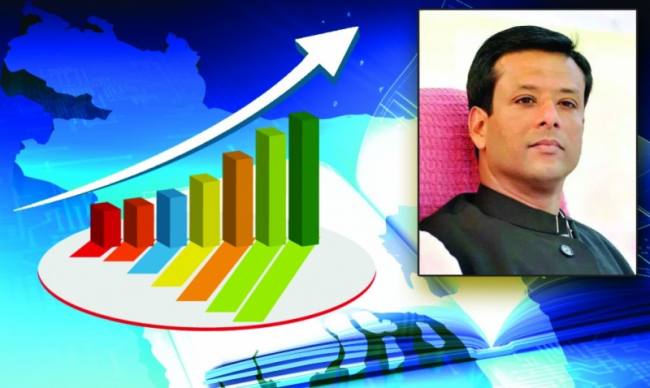 Joining the Knowledge: Economy Bangladesh’s remarkable strides in IT sector