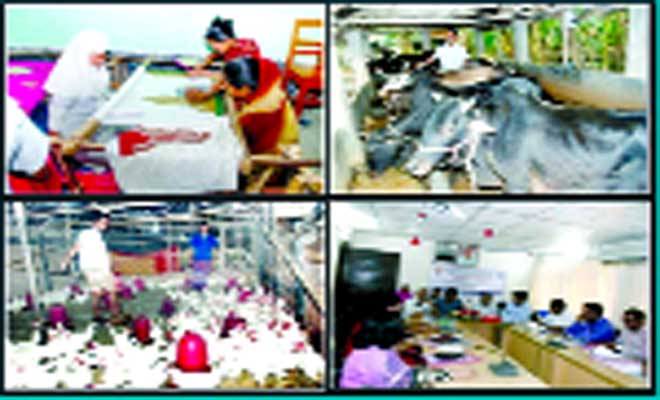 published data on global clothing exports quoting GTIS, Geneva. The countries accounting for 73 per cent of world clothing export experienced decline of 1.43 per cent in 2016 over 2015. Hong Kong had the deepest contraction (-13.29 per cent); China, a large exporter, was the next (-7.33 per cent)

Among the major clothing exporters of Asia, Bangladesh attained the highest growth at 8.11 per cent, followed by Turkey (7.54 per cent) and Vietnam (6.12 per cent). Export from India shrunk (-3.64 per cent).

The headline of the report – “Bangladesh fails to tap advantage, sufficiently.” – was misleadingly pessimistic: The headline reflected the aspiration that all the shortfall be picked up by Bangladesh, implying that the other exporters would not try or fail to protect their performance. “Bagger thy neighbour” has a disruptive impact on world economy. Trade generates benefit by enhancing efficiency across the world and consequent correction of misallocation of resources.

In an ideal global free-trade regime, the performance of a country depends on efficiency. So far as export destinations are concerned, distance matters because of transport cost. Assuming that the same efficient transport is available to all exporting countries and for all destinations, the cost rises with distance.

CHINA STILL THE LARGEST WORLD EXPORTER: China continues to be the largest textile exporter in the world, accounting for just less than one-fourth of the total export. Bangladesh is the second largest but way behind, accounting for less than 7.0 per cent of the world export.

That RMG is the largest export from Bangladesh should not be confused with its relatively small share of the world market. Nevertheless, the high degree of concentration makes Bangladesh vulnerable to pressure, which argues for strong policy drive for diversification.

Daron Acemoglu of MIT (USA) estimates conservatively that the US lost 2.4 million jobs during 199-2011 on account of import from China; and according to David Autor, 25 per cent of the job-loss during 1990’s-2000’s was in the manufacturing sector (Stiglitz, Joseph E, Rewriting the Rules of American Economy, 2015, p.133). No such estimate is available for Bangladesh, which is much too small an exporter compared with China (9.0 per cent compared with 32 per cent from China).

Admittedly, as a result of competition from import and technological changes, employment in manufacturing would go down. But there are ways to arrest that trend and improve upon the previous conditions. Public investment has a critical role, especially in education, technology, and infrastructure, which complement private investment, raise return, and crowd in private investment, according to Stiglitz. Note that Stiglitz does not suggest protection, but emphasises critical investment as the preferred policy for growth and employment.

Jagadish Bhagwati, the doyen of free trade, also argues that opening up the economy in the presence of domestic distortions is not helpful – it may be worse. The rational response is not to allow the distortions to continue – and the economy to sink below others – but reform and restructure. Development of technology and the associated human skill give the developed economies advantage in technology-dependent industry, not labour-intensive industry.

STRUGGLE FOR RENT IN A MARKET UNDER PRESSURE: The EU and the USA are the major export destinations for RMG from Bangladesh. Under Everything but Arms (EBA) policy of the EU, export from Bangladesh depends on quality and price, i.e., competitive efficiency. Export to the USA is subject to quota and import duty which averages 15.62 per cent for all exports and 17.43 per cent for RMG.

A variety of items has different forms of elasticity. However, assuming Ramsey principle (in reverse), the elasticity of Bangladesh’s export to the USA ranges between 0.057-0.064 – much smaller than one (duty = inverse of elasticity/Duty=1/elasticity). At that low elasticity, the legal incidence can be shifted to the consumer.

However, there can be – and there is – divergence between the legal and economic incidence. The market or operation structure affects the allocation of economic incidence. The producer and the seller earn profit over the cost of distribution. Profit margin incorporates an element of rent. If they succeed, the consumers end up paying the tax.

But that affects consumer’s real income – overall demand is depressed by the reduction of real income (by the amount of tax) and the demand for clothing by the proportion of income spent on it. The contraction of demand has a ratchet effect back on the producer and the seller in import market. The producer and the importer reduce the merchandise quantity overall which affects their turnover and profit including rent.

If they were operating on strategic pricing, they would extract the highest rent-inclusive profit and leave the market. A few rogue traders do enter the market during time of trouble or transition. Fortunately, the vast majority of the economic agents makes adjustments and continues to function. They sustain the market.

The following seems to be the strategy of adjustment. First, the market demand needs to be sustained as far as practicable, for which the element of rent in profit will be minimised, if not eliminated altogether. Second, the producer would raise efficiency and concentrate on the particular competencies. Third, the wholesale and retail sellers reduce the rent-inclusive profit margin with a view to sustaining or raising the turnover. Together, they give up a large portion of rent concealed in their profit, the benefit of which accrues to the consumers.

COOPTATION FOR SUSTAINING CONSUMERS’ DEMAND: We often hear that the exporter pays import duty. If the reference is to legal incidence, it does not make much sense. But there is good sense in the remark if the reference is to economic incidence and the cooperation between the producer and seller as a group to adjust down the price.

It is the principle of co-optation: when the cake is under pressure to shrink, cooperate to protect the size if not to enlarge it; once the size is optimally large, compete for a larger share – but spare any attempt that will reduce the size.

Appropriate work environment and safety standards are necessary absolutely. They also contribute to workers’ motivation and commitment that help improve productivity on a sustained basis.

LINKAGE INDUSTRY TO OFFER DEPENDENCE ON IMPORTED COTTON: Bangladesh depends on imported cotton; it is the largest importer of cotton. It is unlikely that Bangladesh will grow enough cotton of its own, given that there are competing claims on the same land for wheat, maize, etc. That should not cause great concern: the output price varies with input price assuming constant technology. Bangladesh can overcome the disadvantage by developing linkage industry, especially accessories, which can add to domestic value content as well as export earnings.

Dependence on imported cotton is not a constraint to reaching US$ 50 billion target. It is wrong to think that Bangladesh will produce more of the same and in the same way. Within the RMG, there will be shift to the up-market quality and increase of efficiency. There are indications of shift to labour-saving automation, helped by the liberal policy for machinery import, which is not quite consistent with the economics of labour abundance.

CULTURAL AND INSTITUTIONAL FACTORS IN WAGE DETERMINATION: When wage determination is the issue, enquiries by Peter Diamond, Dale Mortsen, and Christopher Pissarid (Nobel, 2010), show that demand and supply set the bounds of wage, within which actual wage is influenced by bargaining power, including strength of union and social organisations. The search theory, Stiglitz holds, provides a more reliable or realistic explanation of how wage is set in real economy.

TRADE UNION: The right to form association is guaranteed by the Constitution. The labour laws lay down that at least one-third of the workers in a factory can form a union. The bargaining agent is elected on majoritarian principle. While the ratio of registration to rejection of petitions to form unions is measured, there should be an audit whether the same name appears in different proposed unions that would disqualify registration.

The unions are also connected with federations – a stand-alone union has a low probability of success. Promotion of stand-alone unions is likely to undermine strength of trade unionism; linking workers’ interests with those of importers may undermine even its authenticity. If trade unions were to be genuinely democratic institutions as they ought to be, they must be home-grown – not spoon-fed or helped from outside.

CMO CONTRACT MODEL FOR BALANCE: Compliance as required by the buyers – or the social perception or legal requirements of the importing country – creates an asymmetric contractual relation between the exporter and the importer. The exporter makes investment and has to recover the cost, while the buyer can walk away. The Contract Manufacturing Organisation (CMO) model can restore the balance. CMO model requires the buyer, at whose instance additional investment is made, to buy a minimum quantity – presumably break-even quantity – within a given period, or compensate the producer. The rental power plant seems to employ this model.

FLEXIBLE LABOUR MARKET FOR GROWTH AND EMPLOYMENT: Safety standards are to be ensured and work environment improved. These are not issues to be connected necessarily with price, quota or duty bargaining. But care must be taken to ensure that the labour market does not become rigid. Flexible labour market helps growth which in turn creates employment. Good Samaritans are not necessarily good at business or economics!

DUTY AND QUOTA NOT AN ALTERNATIVE TO REFORM AND RESTRUCTURING: The quota restriction and tax on RMG from Bangladesh do not appear relevant for revenue or protection. Technology and changes in economic and social conditions require restructuring of the economy. Stiglitz perceptively observes that all developed countries, including the USA, have an advantage in industry, employing advanced technology and high skill. It does not have advantage over low-income populous countries in labour-intensive industry. Protection of labour-intensive clothing industry by tariff and quantity barriers is unlikely to deliver the growth and employment the country’s policy seeks to achieve.

Industrialisation and urbanisation or urban renewal go hand in hand. For example, Lowell, about one and a half hour drive from Cambridge, was a hub of textile industry, which became a desolate place as textile industry shifted elsewhere. The Lowell College was upgraded to a University, which infused new life into the desolate place.

A contrary example is Manville in New Jersey, which was a hub of asbestos industry. As asbestos was found to be toxic, the industry came to an end. New life could not be infused into Manville based on a toxic industry – it missed urban renewal.

Efforts to revive the industries rendered redundant by technological change and advances in human skill do not work. Such efforts are romanticised waste of resource and energy!

DISJUNCTION BETWEEN GLOBALISED STANDARD AND RESPONSIBILITY AND ACCOUNTABILITY: The proposition that the producers need to meet environment and safety standards demanded by the importing country reveals a new dimension of international trade. This is an aspect of globalisation of standards without commensurate globalisation of responsibility and accountability. International trade brings benefit through competition. The disjunction between global standardisation and global responsibility or accountability is not beneficial for trade. If global trade were to bring global welfare, investment and accountability also need to be globalised.

THREE CHEERS TO ENTREPRENEURS: While we aspire for – and move towards – the desired conjunction – exporters fend for themselves. On that account, Bangladesh exporters have done well – they have not only sustained export, they have shown improvement while others stayed constant or have had negative performance.

ETHICS OF MARKET ECONOMY: In the absence of a broad and inclusive approach, the market-based economic system faces a grim threat. The ethics of market economy is in competitive efficiency, backed by equitable distribution, which generates material welfare for the most.

An edited and expanded version of the statement and discussion at a seminar at the Institute of Sustainable Development at Harvard University, USA, on September 24, 2016.

5 REASONS DHAKA IS THE BEST CITY IN THE WORLD