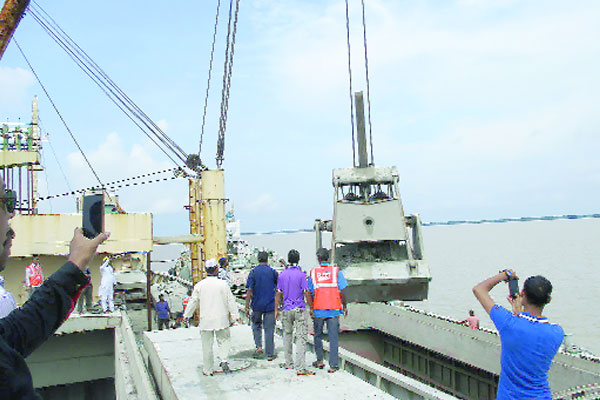 The present Sino-Bangladesh relationship is characterised by close political and economic ties. The matrix of Beijing-Dhaka relations permeates multiple avenues, ranging from strategic to commercial, from energy security to infrastructural. Of these, the strategic ties are the most salient. Chinese ventures into infrastructure building and port development are aimed at consolidating Beijing’s vision for a maritime corridor extending from the South China Sea to the Indian Ocean via the Bay of Bengal. This corridor will help resolve the Malacca Dilemma by ensuring lesser reliance on the narrow Malacca Straits which see transit of 80 per cent of China’s oil supplies. In this context, China is helping to develop the Chittagong port along the coast of Bangladesh. It is significant that Chittagong is in proximity to Kyakpiu, a Myanmarese port from where an oil pipeline is being built to Kunming. If an oil pipeline is built from Chittagong, it can be parallel to the Myanmarese energy transit route originating from Kyakpiu and Sittwe, thus expanding a valuable energy corridor for China. Bangladesh too is keen on enhanced infrastructure. Dhaka once looked for Chinese assistance in constructing a highway passing through Myanmar to Yunnan province of China.

Bangladesh is the third largest trade partner of China in South Asia. But, bilateral trade between them is highly tilted in favour of Beijing. Under the auspices of the Asia-Pacific Free Trade Agreement (AFTA), China removed tariff barriers to 84 types of commodities imported from Bangladesh and is working to reduce tariffs on import of jute and textiles, which are Bangladesh’s major domestic products. China has also offered to construct nuclear power plants in Bangladesh to help meet the country’s growing energy needs, while also seeking to help exploit natural gas resources in Bangladesh. China mainly imports raw materials like leather, cotton textiles, fish, etc. China’s major exports to Bangladesh include textiles, machinery and electronic products, cement, fertiliser, tyre, raw silk, maize, etc.

China, being the largest trade partner of Bangladesh, has trade balance in its favour. For example, in 2006-2007, while Bangladesh’s imports from China were worth as high as US $3 billion, its exports to China amounted to only US $200 million. In order to bridge this huge trade gap, China has not only provided economic aid to Bangladesh but also signed the Asia-Pacific Free Trade Agreement (AFTA) to remove tariff barriers from commodities imported from the South Asian country. China has also taken the initiative to explore natural gas resources and set up nuclear power plants in Bangladesh. The landlocked Yunan province of China has sought to engage in economic cooperation with Bangladesh to rectify its own regional inequalities and gain access to the Bay of Bengal. Bangladesh too, has offered to set up a Special Economic Zone for China. The ‘Agreement on Economic and Technical Cooperation’ and the ‘Framework Agreement’ on concessional loan provided by China to Bangladesh are two other significant treaties signed by the two countries.

THE ONE BELT, ONE ROAD IDEA: The commonality of culture, economy and religion provides a strong and sincere desire for regional cooperation as it has similar lifestyle, fashion and clothing trends, marketing milieu, music, or food. Even the people have had family relations across border and have empathy towards them. So this cross-religious, cross-cultural pattern, and obviously in recent times the cross-economic interest also mutually motivate the people of the region to be in proximity.

The Silk Road was a network of trade routes, formally established during the Han Dynasty. The road originated from Chang’an (now Xian) in the east and ended in the Mediterranean in the west, linking China with the Roman Empire. As China’s silk was a major trade product, German geographer Ferdinand von Richthofen coined it as the Silk Road in 1877. It was not just one road but rather a series of major trade routes that helped build trade and cultural ties between China, Myanmar, Bangladesh, India, Pakistan, Iran, Arabia, Greece, Rome and Mediterranean countries. It reached its height during the Tang Dynasty, but declined in the Yuan dynasty, established by the Mongol Empire, as political powers along the route became more fragmented. The Silk Road ceased to be a shipping route around 1453 with the rise of the Ottoman Empire, whose rulers opposed the West. At the heart of One Belt, One Road lies the creation of an economic land belt that includes countries on the original Silk Road through South East Asia, Central Asia, West Asia, the Middle East and Europe, as well as a maritime road that links China’s port facilities with the African coast, through the Suez Canal into the Mediterranean.

The One Belt, One Road (OBOR) project aims to redirect China’s own domestic overcapacity and capital for regional infrastructure development to improve trade and relations with Asean (Association of Southeast Asian Nations), Central Asian and European countries. It could have as much impact on China’s internal economy as it will have internationally. China’s top priority is to stimulate its domestic economy via exports from industries with major overcapacity such as steel, cement and aluminium. Many will be build-transfer-operate schemes in which large state-owned enterprises (SOEs) will lead the way, but smaller companies will follow. The domestic plan divides China into five regions with infrastructure to connect neighbouring countries and increase connectivity. Each zone will be led by a core province: Xinjiang in the Northwest, Inner Mongolia in the Northeast, Guangxi in the Southwest and Fujian on the coast.

THE BCIM EC INITIATIVES: The ‘BCIM (Bangladesh-China-India-Myanmar) Economic Connectivity Forum for Regional Cooperation’ has become well-known as Kunming Initiative, as it began its journey in August 1999 in Kunming, capital of China’s southwestern province of Yunnan province. After 14 years of intense dialogue and cooperation, now BCIM Forum has become an important sub-regional cooperation mechanism in the region, aimed at greater integration of trade and investment between the four countries. Subsequently, to facilitate and consolidate the process of regional economic cooperation and create cross-border trade and investment opportunities both at public and private sector level, an organisation named ‘China Kunming International Logistics & Finance Association (ILFA)’ has been set up in Kunming with the support of the Chinese government. The initiative has been manifestly mentioned at the recent summit of regional leaders in Beijing and particularly pronounced during bilateral head-of-state level meeting between Bangladesh and China.

There is no denying that Bangladesh-China-India-Myanmar Economic Corridor needs huge funds, both from private and public sectors, to support infrastructural constructions such as harbour, railways, highways and other areas like industrial park, free trade zone and many other projects related to BICM economic co-operation. Accelerating the much-needed cross-border construction can help ease bottlenecks of regional infrastructure requirements which will effectively guarantee smooth, convenient and efficient cross-border logistics movement as well as improve human capital and prompt industrial development in BCIM region. With this in mind, the concept of establishing a specialised regional stock exchange came into the scenario to serve as investment and trading platform, establish a cross-border opening of China-South Asian investment cooperation in both public and private sectors, determine appropriate method for financing and selection of currency denominations for projects undertaken under BICM and regional initiatives.

As such, ILFA, SAFE and stock exchanges from BCIM member-countries as well as bourses from SAFE member-countries and financial institutions may help establish a regional stock exchange. With formal endorsement by respective governments and regulators, the proposed stock exchange will be set up in Kunming and initially trading products including Yuan-denominated securities RMB bonds, RMB fund and RMB index products. These products can be listed in other partner exchanges which will then allow the community of the region to participate in cost and financial benefits of such an economic corridor.