A decorated school building and classrooms in Kulaura of Moulvibazar. Upazila education officer Sharif-ul-Islam is leading the transformation of Kulaura’s primary schools with colour and decoration as he believes colourful schools can inspire students, staff and parents, leading to better environment for education. Photo: Mintu Deshwara
Mintu Deshwara with Andrew Eagle
Pioneering Sharif-ul-Islam, who works as the upazila primary education officer in Moulvibazar’s Kulaura, knows how to make a lot from a little. In efforts to encourage attendance and inspire young learners, he has set about transforming the upazila’s 193 primary schools from drab, run-of-the-mill institutions into campuses that can only delight. Most of Kulaura’s primary schools have become “colourful schools”.

“The majority of children who attend our school,” says Abu Sayeed Md Shafique Rahman Siddique, head teacher of Amir Solfu Government Primary School in Kulaura, “are from struggling rural families. Earlier, we had attendance problems and a troubling dropout rate. But since Sharif-ul-Islam implemented his idea, the situation has changed.”

“Nowadays our students are much more attracted to the school,” continues Siddique, who won a national Best Primary Teacher award in 2010.

Sharif-ul-Islam
“To see their enthusiasm and participation, not to mention the improved attendance rates, is extraordinary.”

When Sharif first took his Kulaura posting in 2013, he arrived with the long-term objective of improving education quality and the condition of local schools.

“I talked to the government primary school teachers,” he says, “I listened to their problems and offered what help I could, within our capacity.

“At the same time, I tried to communicate a vision of schools where teachers are respected and appreciated for their contribution,” he says.

As a part of this vision, and starting with a single school, Sharif decided to make the school building and grounds more attractive. “Under the title ‘My Dreams, My School’, I motivated staff and students to take pride in their institution,” he says.

His hope was that renovated infrastructure would foster qualitative change within the classroom, by motivating teachers, parents and students alike.

It’s a transformation that has been repeated across Kulaura.

A decorated school building and classrooms in Kulaura of Moulvibazar. Upazila education officer Sharif-ul-Islam is leading the transformation of Kulaura’s primary schools with colour and decoration as he believes colourful schools can inspire students, staff and parents, leading to better environment for education. Photo: Mintu Deshwara
“Even from a distance our upazila’s schools are eye-catching,” says Khaleda Yesmin, the head teacher of Pachpir Protapi Government Primary School.

“The boundary and building walls at our school feature sketches of national poets Rabindranath Tagore and Kazi Nazrul Islam; there are many other illustrations of various flowers, fruit, trees and birds.”

“Our classrooms are decorated with charts, educational toys including puppets and student art,” says Samsunnahar, head teacher of Sadapasa Government Primary School. “We have cards with inspiring messages written in large letters, like ‘I Want to be a Doctor’, ‘I Want to be a Scientist’.”

So far, 185 of the upazila’s 193 government primary schools have benefited from the change. In recognition of his efforts, Sharif has received several awards, including being presented with the Sylhet-wide 2016 Best Upazila Education Officer award.

“Sharif’s motivating style, his charisma makes him a role model for the entire teaching fraternity in his upazila,” says Tahmina Khatun, deputy director of primary education in Sylhet.

“His innovative concept has substantially contributed to the development of primary education.”

Bangladesh to be second best performer this year 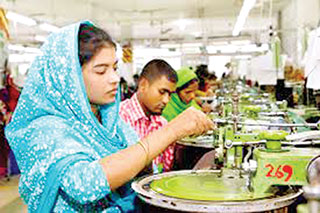