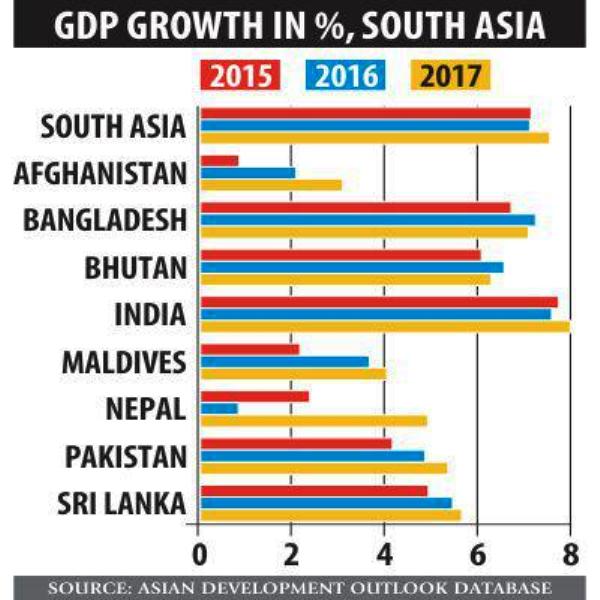 Bangladesh Bureau of Statistics forecast the country’s economic growth at 7.05 percent for the year, while the previous estimate of the ADB was 6.7 percent.

Consumption continued to be the mainstay of growth as higher public sector salaries offset a decline in remittances, the report said.

Despite some statistical discrepancy, net exports are likely to have contributed to growth, the Manila-based lender said.

However, for the current fiscal year the ADB forecasts the country’s gross domestic product growth at 6.9 percent, similar to its previous prediction.

The government’s forecast of GDP growth for the current year is 7.2 percent.

“For meeting the growth target of the seventh five-year plan, timely completion of priority infrastructure projects is essential,” the update said.

However, the GDP growth forecast is depending on some prerequisites like sustained improvement in private investment, timely implementation of key infrastructure projects, and continued political stability.

The report said agriculture growth in fiscal 2016-17 is expected to be moderate to 2.4 percent as low domestic rice prices discourage farmers’ expansion of crop area.

Industrial growth is projected to edge up to 10.2 percent on sustained strong domestic demand and some improvement in power supply and easing of transport bottlenecks.

The services sector’s growth is likely to be lower at 6.3 percent on more moderate expansion in agriculture, trade, transport, and public administration.

The report also said consumption growth is expected to pick up, supported by higher public and private sector salaries as well as continued ready access to consumer credit.

While remittances are unlikely to pick up in the near future, healthy export and employment growth is expected with continued demand for the low-end garments and fast fashion products exported from Bangladesh.

An upturn in private investment is expected to begin in fiscal 2017 with the predicted continuation of political stability.

A major catalyst is the completion of public sector energy and transport projects that reduce the cost of doing business.

Moreover, the government has fast-tracked several large infrastructure projects in the energy and transport sectors, providing impetus to business activity, the ADB said.

The development of special economic zones, including some run by the private sector, further builds momentum for private investment.

The budget of fiscal 2017 aims to raise revenue equal to 12.4 percent of GDP for financing a larger annual development programme.

Current spending will grow to 9.6 percent of GDP with an increase in public sector salaries and modestly larger subsidies directed mainly to agriculture and social welfare.

The implementation of the new VAT law, which had been scheduled for July 2016, was deferred until July 2017 to allow more time for the private sector to adapt their accounting systems and for greater outreach and education to small business. New revenue enhancing tax measures in fiscal 2017 budget included raising rates on net wealth tax, enhancing the minimum corporate tax, and broadening the base of the existing value added tax by bringing wholesale and retail traders into the tax net.

The revised forecast for export growth is 7 percent in fiscal 2017, reflecting slower growth than projected in Asian Development Outlook 2016 in the US and the euro area, the main textile markets. The import bill is revised to grow at 8 percent in fiscal 2017. The revision takes into account modest import expansion in fiscal 2016 when higher domestic production partly replaced imports.

Imports of capital machinery are expected to pick up on higher investment, while a rebound in demand for raw materials and a projected increase in oil prices were also taken into account. With the low oil price environment continuing, remittance inflows are likely to decline by 3 percent in fiscal 2017. The imposition by Kuwait, Oman, and Saudi Arabia of taxes on remittances will further discourage them. Nonetheless, the current account is expected to show a surplus of 1 percent of GDP in fiscal 2017.

ADB to give $100m loan for up-skilling young workforce