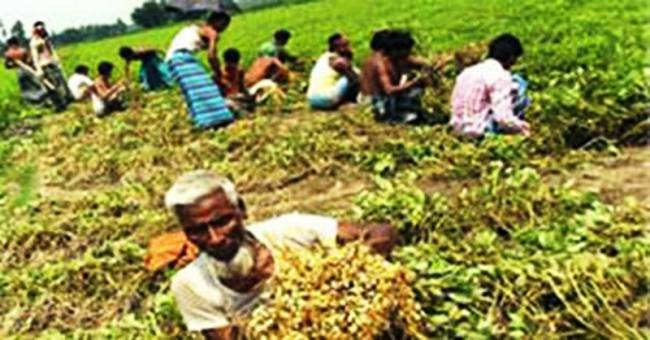 Agriculture experts and farmers are expecting a bumper groundnut production this current Kharif-1 season in all the five districts under Rangpur agriculture region.
According to the Department of Agriculture Extension (DAE) sources, a target of producing 4,806 tonnes of groundnut from 3,157 hectares of land was fixed for the five districts under the agriculture region this season.
“However, the farmers have finally cultivated groundnut in 4,023 hectares of land exceeding the fixed farming target by 866 hectares or 27.43 per cent,” Horticulture Specialist Khondker Md Mesbahul Islam of DAE told BSS on Friday.
As a result, the farmers are expected to harvest over 6,000 tonnes groundnut during this season to exceed the fixed production target of 4,806 tonnes by 1,194 tonnes of the cash crop this time in the region.
“Groundnut cultivation has been increasing faster in recent years following its expanded cultivation almost everywhere including the vast sandy-barren char areas on the river basins in Rangpur region,” Mesbahul added.
Farmer Saiduzzaman of Char Biswa Nath village on the Teesta riverbed in Kawnia upazila in the district said he had changed his fortune through farming groundnut in the char lands though he was landless in the past.
“I have already purchased 16 acres of land and built a semi-pucca building through farming groundnut on char lands,” he said, adding that he had been also meeting educational expenses of his three sons to lead a solvent life.
Deputy Director of the DAE for Rangpur SM Asharf Ali said a farmer could earn a net profit of up to Taka 40,000 by producing 22 maunds of groundnut per acre of land after spending Taka 12,000-15,000 for farming the crop in char lands.
Regional Additional Director Md Shah Alam of the DAE said the farmers had been cultivating groundnut twice annually during the Rabi and Kharif seasons to get excellent production with lucrative price in the local markets.
“The government has been providing assistance to the farmers for further expanding groundnut cultivation, especially on the char lands, to bring fortune to hundreds of the char people living on the river basins in the region,” he added. �BSS
– See more at: http://www.observerbd.com/details.php?id=35062#sthash.zfK2iw0v.dpuf