Fishermen of Chandpur are pocketing good profits, as a good number of Ilish are being netted in abundant number in the Padma and Meghna Rivers. A beam of satisfaction is seen in the faces of thousands of fishermen and they are now passing busy time with happy mood.

Mizanur Rahman Kalu, president of Chandpur fish traders society, said: “Fishermen from the southern districts of the country have been producing around about 3,000 maunds (37.4 kilograms) Ilish everyday over the last 30 days.”
He said: “People from all walks of life are crowding at different markets of the district to buy Ilish, as the price of the fish is their purchasing capacity of the buyers.”
Fishermen of Bhola, Barisal, Patuakhali, Barguna and Laxmipur have been netting plentiful number of Ilish and they have produced them at Chandpur fish markets, however buyers have preferred Ilish from Padma River of Chandpur than the others.
Sujon Patowari and Ahmad Ali, fishermen of Chandpur Sadar upazila, said: “This year we have netted plenty of big size Ilish and we are happy with our incomes.”
“We have already earned Tk5 lakh in this season so far,” they said.
Zahir Ahmed, another fisherman of the district, said: “Sometimes, we get tired netting abundant number of Ilish.”
Local sources said traders from across the country come to the market and buy fishes from there. Some of the traders also buy Ilish to store for upcoming days as now the price of Ilish is lower compared to the previous years for plentiful supply of the fish at different markets of the district.
Traders and fishermen told to the Dhaka Tribune, Ilish weighing around 1kg is sold for Tk1,200 to Tk1,300 while.
Besides, experts hint that fishermen are netting bigger size Ilish than previous years and it has happened due to government’s step to prevent Ilish fry catching.
Dr Anisur Rahman, chief scientist of Chandpur Fisheries Research Institute, said: “Ilish travels in Padma and Meghna Rivers as part of their life circle for reproduction and to collect foods. In this year, a plenty of Ilish entered into the rivers thus fishermen enjoyed the netting of huge amount of Ilish.”
“Plentiful number of Ilish are being netted in this year due to successful implementation of ban on Ilish netting allow proper breeding of Ilish that has boost its production,” he said. 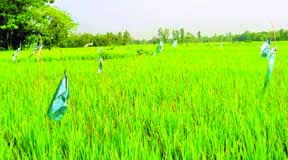