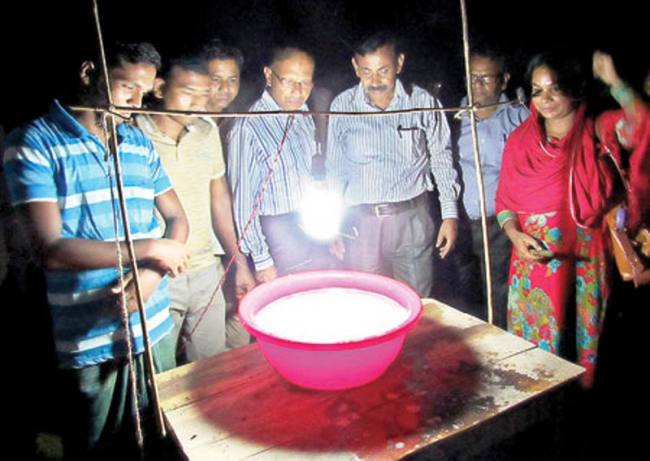 Light trap technology is being applied in T-Aman paddy fields in all the seven upazilas here to detect the presence of harmful insects during the current Aman season.
Agriculture experts said, before applying pesticides in the croplands, it is necessary to detect their presence in the fields otherwise the farmers might incur heavy loss, and the environment might be critically polluted through unmeasured use of the pesticides.
In order to avoid the farmers from the unnecessary expense and save the environment from pollution, the light trap technology is being applied to the paddy fields, they added.
On Tuesday evening, the technology was introduced and applied on the premises of Agriculture Technology Institute (ATI) at Jamalpur block under Palashbari upazila of the district where Additional Director (AD) of the Department of Agriculture Extension (DAE), Rangpur region, M. Shah Alam attended the programme as chief guest.
During the demonstration of the technology, the agriculture experts and local farmers found some insects including green leaf hoppers, white leaf hoppers, short horn grasshoppers and black beetle.
AD M. Shah Alam and other experts said if the presence of the insects at any field is not large scale, it is not necessary to use insecticides.
The farmers of the block thanked the officials of DAE for applying such technology to detect the presence of the insects and suggesting them to cultivate the paddy on their lands without any pest attack.
Deputy Director of DAE AKM Ruhul Amin, AD (Crop Production) Shawkat Osman, Principal of ATI ATM Mizanur Rahman, Upazila Agriculture Officer M. Azizul Islam, Sub-Assistant Agriculture Officer Sharmila Sharmin and farmers including journalists were present on the occasion.
Office sources said, a total of 1,24,105 hectares of land were brought under T-Aman paddy cultivation in the district this year.
The T-Aman seedlings have already grown well in the fields and taken a greenish look.
Meanwhile, the farmers are expecting bumper production of Aman paddy this season as the seedlings were found in good health.