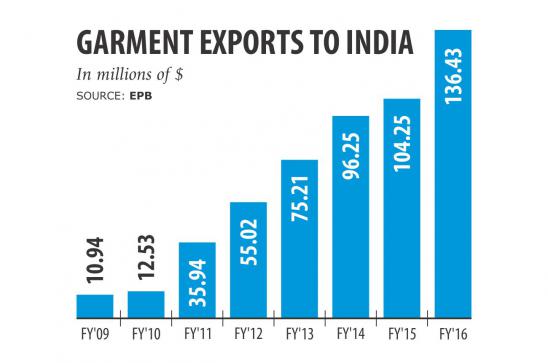 Garment exports to India rose 30.86 percent year-on-year to $136.43 million in fiscal 2015-16 thanks to rising demand from Western brands operating in the neighbouring country.

Of the total earnings, woven items brought in $102.18 million and knitwear $34.26 million, according to Export Promotion Bureau of Bangladesh.

Although Bangladeshi goods enjoy duty-free benefit in the Indian market, garment exports to India did not rise much due to the imposition of 12.5 percent countervailing duty on apparel items from Bangladesh.

Bangladeshi garment exporters also face provincial taxes and non-tariff barriers in India, which has an apparel market worth nearly $40 billion.

Though India in 2011 allowed duty-free benefit to almost all Bangladeshi goods except 25 alcoholic and beverage items, it imposed the countervailing duty on apparel, Bangladesh’s main export item, the following year.

However, garment exports to India have been showing signs of pickup from last year when many Western clothing retailers started operating in that market.

US retail giant Walmart and Swedish retailer H&M opened a good few stores in India in the last few years.

Walmart India owns and operates 21 Best Price Modern Wholesale stores in nine states across India and plans to open another 50 by 2020, according to its website. H&M said it would double the number of its stores in India by the yearend from six now.

“It is a big advantage for us that the foreign retailers are operating in India. Our garment exports to the Indian market will increase further in near future due to the presence of such retail giants in India,” said MA Jabbar, managing director of DBL Group, a leading garment exporter.

Foreign retailers buy a lot of garment items from Bangladesh for Indian customers, especially for the rising middle class, he said.

Bangladeshi garment items are popular in India because of low prices and better quality, Jabbar added.

“We are performing very well in knitwear export to India because of the varieties of this product,” he said.

Similar is the view of Faruque Hassan, vice-president of Bangladesh Garment Manufacturers and Exporters Association, the garment makers’ platform.

Garment exports to India have been rising mainly from last year thanks to the Western retail giants operating in India, he said.

Many Indian companies that have retail chains in India tied up with the foreign retailers to grab the market, he said.

“We are far ahead of India in knitwear. This is an advantage for us,” he said.

Hassan said garment makers are also inspired by the stimulus package the government has offered to them for exporting to new destinations like India, Japan and China.

Except the US, the EU and Canada, all other markets are considered as new destinations.

The government has been paying cash incentives to garment makers, who export to the new destinations, at 3 percent of the export value since 2009.