Junaid Ahmad has become the World Bank’s Country Director for India, replacing Onno Ruhl who served a four-year term based out of the national capital, reports PTI from New Delhi.

Hailing from Bangladesh, Ahmad was Chief of Staff to the World Bank Group President Jim Yong Kim before being elevated to the current position.

“An economist by training, Ahmad brings with him broad development experience. After joining the World Bank in 1991 as a young professional, he worked on infrastructure development in Africa and Eastern Europe,” a World Bank release said.

“India’s recent growth and development has been one of the most significant achievements of our time. With historic changes unfolding and new opportunities emerging, Junaid will bring to this key position strategic leadership along with considerable experience of working in both India and South Asia to support this transformation,” Kim stated.

Annette Dixon, World Bank Vice-President for South Asia said: “Junaid’s strong experience in the critical areas of water, urbanisation, and social development will ensure that the Bank’s future strategy for India is formulated and implemented in line with the country’s own development goals.”

India is the World Bank Group’s largest client, it said.

As of June 2016, the bank’s net commitments to India stood at $27 billion (International Bank for Reconstruction and Development $16 billion, International Development Association $11 billion) across 95 projects. 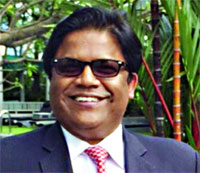