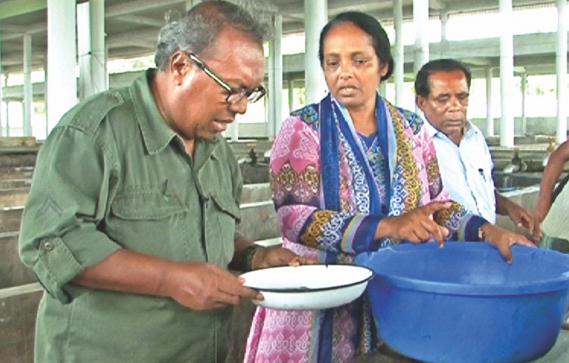 Even though, this fish looks like a snake, in reality it’s not a snake. Neither has it had any feature of a snake. In many countries, cuchia (eel) has great demand as a tasty fish. But, I must remind my readers, it’s not an electric eel as well.

The scientific name of this fish is Monopterus cuchia. The government has already undertaken a project, under which experimental farming of cuchia and crab is going on in 29 districts. The cost of the project is estimated to be Tk 36.24 crore.

Generally people residing in coastal areas and the indigenous people, farm cuchia and crab locally at a small level. The Department of Fisheries is training these interested farmers. The project started during February, 2015, which is supposed to end in 2018. Small ethnic groups are getting priority in this project of cuchia and crab cultivation.

Dr Durin Akhtar Jahan, director of the project’s research team, is specially working with the nature, characteristics and food habit of the local cuchia.

“What stage is your research is in right now?” I asked Dr Durin.

“We have been successful in small production,” she replied.

“We provided them fish pest as feed and different types of feed and we’re glad they’ve accepted it,” added Dr Durin.

At least 20% of fish pest has to be used in the main feed, or else cuchias won’t take it. And, Dr Durin and other researchers are trying to make this fish more domestic.

Cuchia always loves to be deep inside mud. It is in no way dangerous. It doesn’t have any spike on it and there is no chance of it biting anyone as well.

It is difficult to harvest them. The indigenous people have adopted special skills though. However, it’s really difficult to do it commercially following the traditional methods.

“We covered the whole pond with rexine. Over that we have poured soil up to two feet. We also used compost. Then we were able to breed cuchia,” said Dr Durin. She believes this method is great for commercial breeding.

They are also preserving fingerlings in the hatchery. In one and a half year time of the project, already seven thousand fingerlings have been produced.

Since it’s an omnivorous fish, they eat their fresh eggs too. That’s why their breeding and reproduction is a little tough. That’s why you won’t be able to tell exactly how many young eels will you get. This can only be possible via artificial insemination.

In the primary stage there will be less fertilization. Then, the hatching rate will also decrease. Then, there is also the question of the survival rate.

“Apparently, from fifteen female eels, we got 800,” said Dr Durin.

“No. They can lay 300 to 1200 eggs. But, we’re looking forward to a much better production in near future,” replied Dr Durin.

Satkhira’s Shyamnagar upazila’s Magurakuni village is mostly inhabited by small ethnic group people. There are lots of small ponds in which fish cultivation hasn’t started yet. Works are going on for extension of cuchia cultivation under the government’s project.

There is possibility of meeting the demand of cuchia in international market and earn foreign currency. I have talked with farmer Archana Rani Mandal.

“They taught us everything on how it is done. We have been stirring this up from a long time now since cuchia is here in our area. It is helping us. We didn’t know how to do it before, but now, we have gained a lot of experience,” said Rani.

“We are also getting fair price for them. We can do this alongside other household works. We’re hopeful that we can export it as well, besides crabs,” she added.

I have also talked with Shyamnagar Upazila Fisheries Officer Faruque Hossain about the development of cuchia farming project.

“Cuchia cultivation is gradually increasing in Shyamnagar as there is salt water here. Many make their livelihoods by harvesting cuchias here. We selected three fish farmers and trained them on how they can do it even better and earn more profit out of it,” said Faruque Hossain.

“Seeing this, many others have shown interest. They want to start farming it if they get some assistance from us,” added Hossain.

I also went to Kalbari, a wholesale bazaar of cuchia and other fishes. I talked with a market trader, named Rezaul Karim.

“Farming cuchias in indoor reservoirs (houses) is not that much profitable,” says Karim.

“However, the fisheries officers are supporting it quite strongly,” I expressed.

Dear readers, from our country, cuchia worth more than ten million dollar is being exported to South Korea, China, Laos, Vietnam, Cambodia and Indonesia in a year. As our cuchias are fatter and heavier than cuchias of other nations, they have great demand. Similarly, advanced research for developing its variety is needed. Then, another milestone will be made in producing export quality fish.