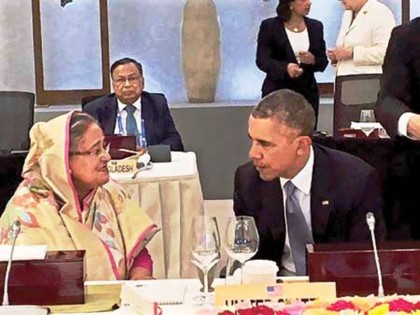 Published :Tuesday, 31 May, 2016, Time : 12:00 AM View Count : 10
Bangladesh, we can tell ourselves, is now clearly a player on the global stage. That is the truth which emerges from Prime Minister Sheikh Hasina’s just-concluded visit to Japan. As a head of government invited to the G-7 Outreach meeting on the sidelines of the G-7 summit of leaders of the world’s developed nations, the Bangladesh leader has done us proud as a nation. Indeed, it is a sure mark of the strong and purposeful leadership she has demonstrated over the past seven years that has been on display on a global scale. The Outreach meeting in Japan was but a fresh demonstration of the heights Sheikh Hasina and by extension the Bengali nation mean to reach in their interaction with the rest of the world.
In these past many years, Sheikh Hasina’s leadership has been characterized by less rhetoric and more real achievements in terms of governance in the country. That seems to be the reality which the rest of the world has come round to acknowledging. Of course, there have been the impediments and all those reasons for complaint. In politics, nothing is perfect. We in Bangladesh understand this truth rather well. But where we as a nation are justifiably happy is in knowing that on Sheikh Hasina’s watch, the national economy has been registering commendable progress, to a point where the growth rate has been over six per cent in the last few years despite an economic meltdown worldwide.
Much as the doomsday pundits would like to project conditions as being negative and much though certain elements abroad may persist in their motivated propaganda against the country as a whole, the fact remains that Prime Minister Sheikh Hasina’s assertive and strong leadership has kept Bangladesh focused on what it means to achieve in future. It has been a quiet revolution she has led, an instance of which is the fact that we have already achieved the status of a lower middle income nation, a departure from the image of a poor country. That is symbolic of respectability. It is a broad hint that on our own, based on our determination to better our lives, we have shown that we can indeed improve the quality of life for ourselves, for every citizen in this country. The next milestone before us is one of turning this republic into a proper middle income country. That does not seem to be an impossible feat now as we count the days toward achieving our Vision 2021 goal, which will be a fitting celebration of the 50th anniversary of our sovereign nationhood.
And it does not because the Prime Minister has had her priorities set in the order in which she thinks is necessary for the country. Our commitment to tackling climate change is one of those priorities. That is one more reason why Sheikh Hasina and, through her, this nation as a whole is today a proud participant in matters affecting the globe. Let it not be forgotten either that one of the potent ways in which we have registered our presence on the global stage is through the vibrant role of our armed forces in UN peace-keeping operations in different regions of the world. All such factors, we might properly draw the inference, have contributed to the image of a dignified Bangladesh, a nation which tells other nations that it is no more a backwater of history.
And it is not because under Sheikh Hasina’s leadership, we as a people have struggled mightily to retrace our steps to the glory of lost times. Those were the times when the Father of the Nation, Bangabandhu Sheikh Mujibur Rahman, personified the aspirations of this nation. He walked tall, literally and figuratively, in the councils of the world. He gave us, through a palpable articulation of our aspirations, a cause we could believe in. The cause became a dream and then a goal. It eventually became a reality, the reality of national sovereignty based on the principle that the land belonged to all citizens irrespective of caste, colour and creed.
It is a similar cause which Sheikh Hasina, as the nation’s elected leader, symbolizes today. That she has scrupulously stayed above the noise and din coming from her detractors on the issues, that she successfully maintained constitutional continuity through her determination to go ahead with the election of January 2014, that she understood the popular need for the war criminals to be brought to justice, are qualities which underline meaningful leadership. And meaningful leadership is what the world respects, despite its carping and its gripe. Sheikh Hasina’s refusal to cave in to pressure, both from within and without, on many issues afflicting the country has sent out the message that the world will need to deal with Bangladesh on Bangladesh’s terms.
Self-esteem matters, for individuals and nations alike. It was this self-esteem which led us, through Sheikh Hasina, to the G-7 Outreach meeting, indeed to conferences and councils elsewhere around the world. Yes, we do have our problems. Yes, there are the law and order issues we muddle through every day. There are all the areas where we can do better, all the lives we can raise to higher levels of happiness.
With firm, good and far-sighted leadership, this nation can do all that. And much more.
–

`US can learn many things from Bangladesh`