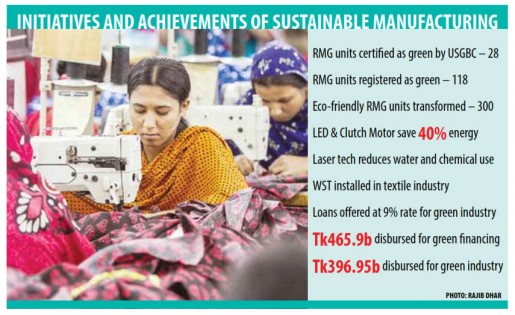 Bangladesh’s apparel manufacturers have entered into sustainable manufacturing practices by establishing eco-friendly factories and introducing energy-efficient latest technologies to give a cushion against carbon emission.

The issue of sustainable manufacturing came under the spotlight as global consumers are becoming more and more cautious on environment while the global retailers are looking for suppliers of apparel produced in eco-friendly factories.

Sustainable manufacturing refers to the creation of manufactured products through economically-sound processes that minimise negative environmental impacts while conserving energy and natural resources.

Since 2011, a total of 28 Bangladeshi RMG factories have got certification from the US Green Building Council (USGBC) as green building.

Of them, six got certification on Leadership in Energy and Environmental Design (LEED) Platinum, 13 in Gold, 5 in silver and 4 certified as green.

Besides, there are 118 RMG units, which applied for the green certification in different categories.

“To make an industry sustainable, it has to consider environmental issues since the climate change is a big concern among the global consumers and buyers because of higher carbon emission,” Abdus Salam Murshedy, managing director of Envoy Textile, a LEED Platinum certified textile company told the Dhaka Tribune.

The process makes business more competitive as it consumes less water, chemical and electricity to give less pressure on natural resources, Salam said.

“That is why, we are going green and using energy-efficient technologies for sustainable manufacturing.”

GTL has adopted such sustainable and environmentally friendly technology supported by Green Project, which will not only save water, but also reduce carbon emission,” said Faruque.

GTL is equipped with a full-fledged biological Effluent Treatment Plant (ETP) that can treat about 30 tonnes of discharged water per day, he added.

“Using laser technology instead of traditional ones in making a pair of jeans, you can reduce the use of water by 30%-40% while chemicals by 20%-30%,” Mustafiz Uddin, managing director of Denim Expert Limited, told the Dhaka Tribune.

Mustafiz labelled the laser technology as very precise and more productive when the same number of workers are working at the same time.

It also poses a little health hazard since a less amount of chemicals are used in the process, he added.

Bangladesh RMG manufacturers introduced Clutch Motor replacing Servo Motor and LED lights instead of T-8 lights only to give a cushion to the earth.

“We are using Clutch Motor, which consumes about 50% less electricity while LED lights save around 30%-40% energy,” Rezaul Karim, GM of Rising Knit Textile told the Dhaka Tribune.

In traditional process, the Servo Motor consumes 80 to 100 litre of water for per kilogramme of fabrics, which came down to 40 to 50 litre due to installation of the new technology, he added.

According to a baseline study conducted by Bangladesh University of Engineering and Technology (BUET) over a period of more than six months over the same number of operating hours, LED lights consumed 57% and 33% less energy compared to T-8 and T-5 lights respectively.

The study was done on RMG factories. Besides the worker safety issues, the sector has to concentrate on environmental consequences as the industry is rapidly expanding.

It would be an opportunity if Bangladesh can enhance its capacity to attract higher shares of the global RMG market.

“It is the high time that the apparel sector invested in green manufacturing to take the lead in sustainable manufacturing, which would act as a catalyst to achieve $50 billion export target,” BGMEA Vice-President Mahmud Hossain khan Babu told the Dhaka Tribune.

It also will help the government in lowering carbon emission below 5% as per its target, he said.

As per the Bangladesh Bank directive, the owners are enjoying loans at 9% rate.

According to the central bank data, in the last fiscal year, banks and non-banking financial institutions disbursed Tk465.9 billion as part of green financing to encourage green industrialisation.

Of the total amount, nearly Tk396.95 billion were disbursed for green industry, of which RMG is a major stakeholder.

The big challenge in going sustainable manufacturing is financing as it is a costly investment.

Though the government is providing financial support, it is only for factory establishing, said the BGMEA vice-president.

“I think the support should also be for replacement of technologies to make existing factories eco-friendly.”