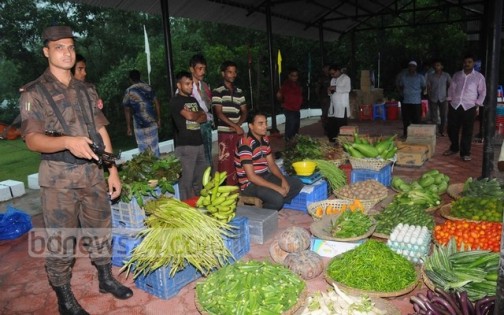 Tripura Industry and Commerce Minister Tapan Chakraborty said, “The government of Bangladesh has written to India to increase trade through border haats. At present the matter is under consideration. The Tripura government has welcomed the initiative of the Bangladesh government,”

He was speaking to reporters here in the state secretariat on Monday evening.

Chakraborty said his government is also pressing New Delhi to further increase the sanctioned number of border haats in the state from four to eight.

Chakraborty said, “Presently out of four, only two border haats at Srinagar and Kashba, which were inaugurated last year, are functional and are very popular among the people on both sides. ”

He said until 31 March this year in the Srinagar border haat from Tripura side the volume of business was Rs 5.8 million while from Bangladesh side it was Rs 2.6 million.

Two more haats are in the pipeline at Kamalpur and Raghna

“ If New Delhi accepts the proposal of Dhaka then we hoping for more fund for these projects beside approval of four more border haats at Ekinpur in Belonia, Bamutia in Mohanpur sub-division, Hiracherra in Kailasahar and Bakshanagar in Sonamura,” the minister said.

According to the minister these haats are not only trade centres but people from two sides gather there to meet their relatives and friends. Many come as tourists and boost people-to-people contact in the two neighbouring nations.

Beside border haats in Tripura there are six land ports with Bangladesh of which only two are functional at Akhaurha and Srimantapur.