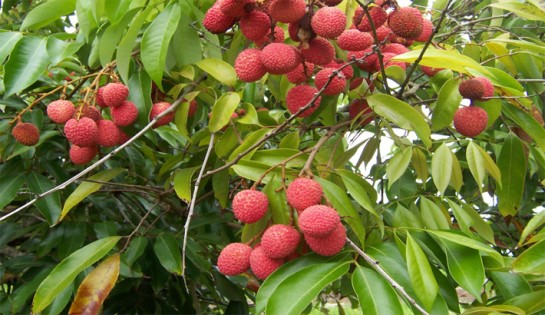 SUNAMGANJ: Bumper production of litchi, especially of the local ‘Manikpuri’ variety, has cast a beam of delight on the faces of the growers of the luscious summer fruit in Sunamganj this season.
Farmers at Manikpur, Godabari, Chandpur, Kochudair, Borogola and Rajargaon villages of Noarai union of the district’s Chhatak upazila, which has a good name for widespread production of the juicy fruit, are now in a jubilant mood for the yield they have got so far.
The fruit bears immense potential to change the farmers’ lot at the villages, where every house has an orchard of 10/12 litchi trees. Many litchi growers, including Shukkur Ali, Abu Bakkar Siddik, Abdur Rahim, Jamal Uddin, Siddik Miah, Badal Miah, Dolon Miah, Amir Ali, Rostom Ali and Farid Miah, have set example of elevating fortune through litchi cultivation.
The ‘Manikchuri’ variety litchi could have already made a good name across the country. Litchi growers at Manikpur village are now passing busy time for marketing of the fruit.
However, what the growers see as a major setback for marketing of their produce is the backward communication network. Abdul Khalek, a litchi grower at the village, said they had to use rickshaw van for carrying litchi to the nearest markets as the road beside the village is an uncarpeted one.
Litchi is being cultivated in 10 upazilas of the district commercially.
Litchis of around Tk 6l lakh are traded at the village daily. The size of the litchi of this area is big as well as tasty. The taste of the litchi here is different for high soil quality, said Fazlu Miah, a litchi cultivator.
Jamal Uddin, another farmer of the area, said they cultivated litchi at the village targeting Tk 1 crore yield this year for favourable climatic condition. Another farmer Shukur Ali said the wholesalers could not come to the area for undeveloped infrastructures.
Traders purchase 1,000 pieces of litchi at Tk1500-1800 at Chowmuhoni Bazar in Noarai union. Litchi farming had been started in the area from a farm of landlord Haripad Roy Chowdhury and his brother Santipad Roy Chowdhury during the British rule.
The men of the landlord planted 20/30 litchi trees in the area as an experiment.
At present, the century-old litchi trees bear the sign of the British colonial period.
The farmers lamented that the transport condition is very poor in the area. Locals also sought government support in development of the fruit’s farming and marketing.
“If we get government patronisation and proper technological support, it will be possible to meet the demand of this seasonal fruit across the country,’ said a farmer. Litchi cultivation has expanded in eight villages, including Manikpur in Noarai union, Hada Chanpur and Kumardani village in Islampur union, and Tergratila, Lamasaniya and Lastob villages of Doyara union.
Farmer Arab Ali said they were expecting Tk 30,000 to Tk 40,000 sale from each of the small orchards and Tk 2 lakh sale from each of the big ones.
Jahedul Haque, deputy director of the Department of Agricultural Extension, Sunamganj, said the quality of litchis grown in Manikpuri village is very high.
The DAE has taken a big initiative to expand its cultivation, he added. They are also working to enhance co-operation with the farmers this regard. —UNB