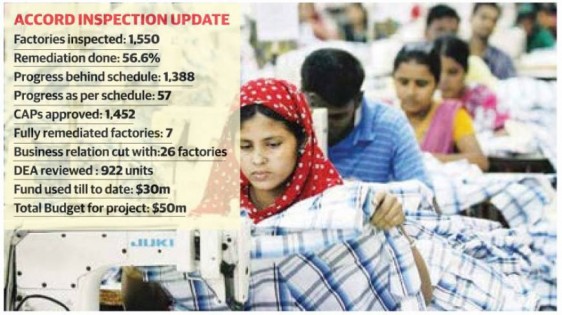 A total of 56.6% RMG factories, producing apparel products for the Accord signatory brands, have accomplished their remediation work in terms of fire, electrical and structural safety.

However, a total of 1,338 apparel units under the Accord on Fire and Building Safety in Bangladesh are still behind the schedule with their remediation process. On the other hand, 57 units are making their progress as per schedule.

Accord, a platform of European brand and retailers formed to improve the safety standard in the country’s RMG sector, revealed the data at a press conference held in the city yesterday. The press conference was organised by Accord to mark its third years in Bangladesh.

“Since November 2013, 1,550 factories under the Accord have been inspected for fire, electrical and structural safety. About 56.6% of the safety hazards identified through the initial inspections have now been reported or verified,” Accord Executive Director Rob Wayss told the press conference.

He said: “This is a significant accomplishment and the factories are becoming much safer but remediation works still need to be completed without any further delay.”

According to the latest data, only 7 factories have been remediated fully while 74.4% in electrical safety, 50.50% in fire safety and 36.8% in structural safety have been corrected. Besides, 1,452 Corrective Action Plans (CAPs) have been approved.

Among the inspected factories, a total of 3,452 follow-up inspections are done while detailed engineering assessment of 922 factories has also been reviewed.

“The Accord’s intensive and sustained program of supporting remediation and escalating cases where progress is too slow is working. The Accord is committing an enormous amount of time, staff, and resources to making sure remediation is completed and completed in a more timely manner,” said Accord Chief Safety Inspector Brad Loewen.

As per the agreement, the Accord will have to complete the remediation process by the end of June 2018.

‘Yes, we are very much hopeful that remediation of all the factories, producing products for our signatory brands, will be completed as per deadline which is June 2018,” said Rob in response to a question relating to the end of the remediation works.

Though the factory owners are crying for low-cost funding for accomplishing the remediation works as per the requirement of the brands to upgrade their factories to the international standards, the Accord is still assuring them that financing is not a problem.

As of yesterday, the Accord spent US$30 million out of its total budget worth $50 million to improve the safety standards in RMG sector in Bangladesh.

According to the Accord, there are 50 RMG units that need to be relocated while about 300 are housed in the shared-buildings. These factories have shown slow progress as they are not willing to remediate now because they are opting for relocating their factories.

After three years of the Accord in Bangladesh, it has now focused on the labour rights issues and introduced a safety committee training program at approximately 65 Accord-listed supplier factories having registered trade unions.

The issues of safety came under spot light after the collapse of Rana Plaza building in the 2013. Following the incident, on 15 May 2013, global garment brands and retailers and 2 global unions and their national RMG affiliates signed the agreement to make garment factories safe in Bangladesh.