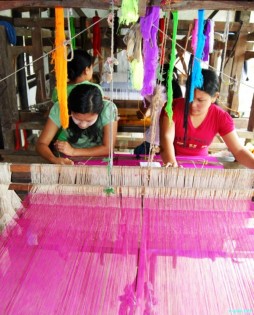 The government has taken a number of projects worth Tk 1848 crore for modernising the handloom industry of the country to meet the growing domestic demand and also compete efficiently in the world market.
The number of handloom factories recognised by Bangladesh Handloom Board is now 279 and the country’s 40 percent of the total demand of fabric is supplied from these factories, according to the handloom census conducted in 2003.
Official documents show that the government is going to set up a handloom village on the outskirts of Dhaka by December 2018, spending Tk 146,370 lakh.
Besides, the government has taken a project involving Tk 26,160 lakh to provide running capital, resume production in closed handloom factories and modernise handlooms for improving the socioeconomic condition of the people involved in the sector. This project will be implemented by June 2020.
Ten training and two market promotion centres will be constructed at Basic Centres of Bangladesh Handloom Board at an estimated cost of Tk Tk 6,664 lakh. The project is scheduled to be completed by December, 2018.
Another project has been undertaken for modernising the diploma course and expansion of necessary infrastructure of Bangladesh Handloom Education and Training Institute situated in Narsingdi involving Tk 3081 lakh. This project will be completed by December, 2018.
Yet another project has been taken to set up training centres, showroom-cum-selling centres and a microcredit distribution programme, aiming to develop the lifestyle of tribal weavers.
To bring back the lost glory of famous ‘muslin’ cloth, a project titled ‘Research for Regaining Technology of Muslin Thread and Cloths’ has been taken with an estimated cost of Tk 718 lakh. It will be implemented by December, 2018.
A senior official at the Textiles and Jute Ministry said distribution of microcredit among weavers is also going on under another programme. As of March, 2016, an amount of Tk 6471.39 lakh has been distributed among 41,324 weavers against their 56,625 handlooms.
Besides, the National Board of Revenue (NBR) on June 4 last year issued an SRO (Statutory Regulatory Order) paving the way for the duty-free import of raw items like thread, colour and chemicals.
Historically handloom has got its predominance and heritages in Bangladesh. The tradition of weaving cloths by hand constitutes one of the richest aspects of Bangladesh culture and heritage.
A manpower of about one million weavers, dyers, hand spinners, embroiderers and allied artisans have been using their creative skills into more than 0.30 million active looms to produce around 620 million meters of fabrics annually. It shares 63 percent of the total fabric production in the country designed for home consumption.
Besides, it provides employment opportunities to a million rural people, including 50 percent women.    UNB