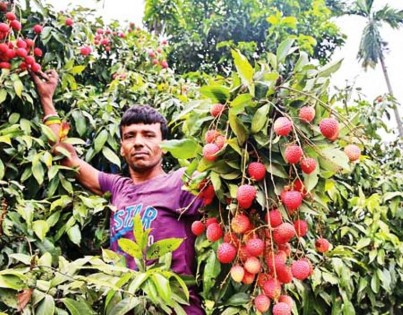 Production of 2,07,338 tonnes of various species of seasonal fruits this year amid conducive climate and pro-planters logistic supports and consultancy rendered by DAE personnel could satisfy the planters and people of the district
A bumper production of summer fruits of various varieties is being expected in the northern region of the country this season amid favorable climate and pro-planned logistic support provided by the officials of Department of Agriculture Extension (DAE).
The summer fruits including mango, litchi, jackfruit, guava and papaya are growing excellent this season in the region.
Unlike previous seasons, big and small fruit traders from different parts of the country have already flocked different areas of the region and purchased the fruit in advance from the orchard owners.
Every year, a huge number of jobs are created for local male and female farm-labourers and even children during this season as they are engaged in harvesting, packaging and marketing of fruits in Rangpur and Rajshahi Divisions.
Farmers and common people have been producing 90,000 tonnes of various fruits worth Tk 640 crore annually on their orchards and homesteads on 10,500 hectares of land in Rangpur region alone.
According to DAE sources, if the climatic conditions remain favorable, about 45,000 metric tonnes of litchi would be produced from orchards and homesteads in Dinajpur, Nilphamari, Lalmonirhat, Rangpur, Kurigram, Thakurgaon and Panchagarh districts this season.
Sources said litchi has been cultivated in 667 orchards on 4,100 hectares of land under all 13 upazilas in Dinajpur district that produces the highest quantity of the fruit in the country.
Meanwhile, over 85 per cent of litchi trees in over 1,000 small, medium and big litchi orchards and homesteads covering around 7,000 hectares of land are in full bloom in all the district of Rangpur division.
Deputy Director of the DAE, Dinajpur, Golam Mostafa said Bedana, China-3, China-4, Bombay, Madrazi and Kanthali varieties of litchi would be produced in Dinajpur alone this season if the climatic condition remains favorable.
Owner of a litchi orchard Ansarul Islam of Biral upazila in Dinajpur said he hopes to get better litchi production this year as the tender litchi fruit are growing excellent.
On the other hand, commercial cultivation of Haribhanga and other varieties of mangoes have already become popular among farmers and rural people of the northern region.
This season, over 6,200 farmers and local people have cultivated the mangoes on over 5,700 hectares of land comprising 4,200 small, medium and big orchards and homesteads in the Rangpur district while they earned Tk 147 crore by selling 21,000 tonnes of mangoes last year.
Farmers are expected to produce around 22,000 tonnes of Haribhanga mango as its cultivation has been expanded across Rangpur division.
Haribhanga variety of mango is mostly cultivated in Dinajpur, Thakurgaon, Panchogar, Gaibandha, Nilphamari, Lalmonirhat, Rangpur and other districts of northern region.
Meanwhile, “Mango production will not be satisfactory in my area this year as almost 20 per cent of the fruits fell from the trees before ripening,” said Ensan Ali, a farmer from Bagha upazila in Rajshahi.
He said mango trees in his area had initially blossomed well, but most of the mangoes are affected due to prolong sultry weather since April 12 last.
Ahsan Ullah, a mango trader of Lalbag village in Godagari upazila, said mango production is likely to suffer a setback this year due to unfavorable weather. The annual average mango production is about five lakh tonnes from over 45,000 hectares of land in eight districts under Rajshahi division including Chapainawabganj where mango grows on 22,000 hectares of land while it is about 8,500 hectares in Rajshahi.
The unexpected sultry weather caused the mangoes to drop prematurely. Most mango growers in the two mango producing districts have used pesticides and other chemicals at least 20 times for “protection and better yield”.