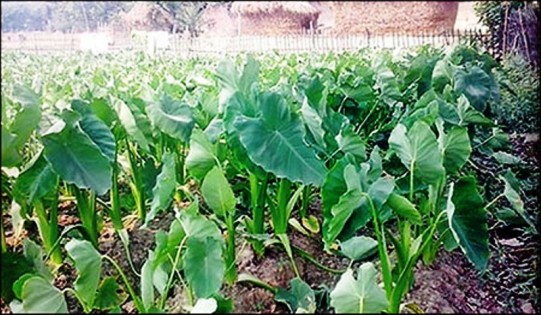 RAJSHAHI, May 8: Due to low cultivation cost, high yield rate and handsome profit, the cultivation of arum is becoming popular among the farmers of nine upazilas here.
The farmers here mainly cultivate ‘latiraj’ variety of arum which grows in plenty across the district.
According to the Department of Agricultural Extension (DAE) in Rajshahi, over 568 hectares of land were brought under arum cultivation in nine upazilas here this year which was 468 hectares last year. Meanwhile, the cultivation is increasing gradually due to low cultivation cost, bumper production and fair price in the market.
At least 50 farmers are cultivating arum for the last several years in Kamla-Keya village under Tanore upazila of the district.
A farmer Sekendar Ali of the village said, “The cultivation of ‘latiraj’ variety is increasing here. It is generally cultivated in the first week of January and the harvesting starts in the middle of March. Then again it is cultivated in the first week of April and the harvesting starts in the middle of July.”
“I incurred huge loss in Aman paddy cultivation last year. So, this year I cultivated arum in 1.5 bighas of land. The vegetable has great demand and it fetches fair price also. I am expecting bumper production of arum this year,” he added.
Seraz Uddin of Dhuroi village under Mohonpur upazila said that he cultivated arum in his three bighas of land this year. He said that he became interested in arum cultivation for its low cultivation cost than others crops.
Rabiul Islam of Moyenpur village under Mundumala Municipality said, “I cultivated arum in one bigha of land last year spending Tk 18,000 to 20,000. Last year, per maund of arum was sold at Tk 1,200 to 1,300 and I earned Tk 40,000 to 42,000. Following this, I cultivated arum in two bighas of land this year. I hope to achieve bumper production.”
Tanore Upazila Agriculture Officer Somaresh Ali said of the nine upazilas, the farmers of Mohonpur and Tanore upazilas have cultivated arum on more lands this year.