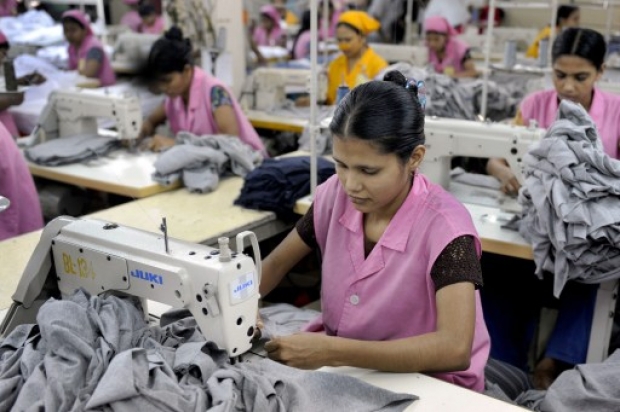 It was a disaster which shook the global fashion industry — laying bare the stark reality of the dangerous factory conditions faced by millions of Bangladeshis who stitch the clothes sold in the gleaming high street stores of the West.

In all, the bodies of 1,136 garment workers were pulled out of the rubble when the Rana Plaza building — an eight-floor factory complex supplying clothes to big brand fashion retailers — collapsed in April 2013 on the outskirts of Dhaka, Bangladesh’s capital.

Three years on, as experts lament how government, retailers, factory owners and consumers have done little to safeguard workers, a small miracle has emerged from the tragedy and is slowly taking shape in the southeastern corner of the country.

Replacing factory floors for classrooms and swapping sewing machines for computers, 22 female garment workers have ditched their jobs to pursue undergraduate degrees in a first-of-its-kind course at the Asian University for Women (AUW).

Established in the aftermath of the disaster, AUW’s Pathways for Promise programme aims to use higher education to empower women labourers to become leaders and have a stronger voice in shaping the future of Bangladesh’s lucrative garment sector.

“The Rana Plaza disaster is a symbol of industrial insensitivity to the humanity of workers. These are people with dreams and families whose stories remained muted until catastrophe struck,” AUW Support Foundation’s President and CEO Kamal Ahmad told the Thomson Reuters Foundation.

“Countless commission reports have been duly compiled and distributed, but workers have not been able to raise their voices at the national level or impact new legislation.”

The five-year degree course, said Ahmad, would help the young women become leaders in the ready-made garment industry, or in other fields they may want to pursue.

Bangladesh is the world’s second largest garment producer after China. The industry is a key pillar of the South Asian nation’s economy — generating almost US$25 billion (RM98.4 billion) in export earnings yearly and accounting for 20 per cent of GDP.

Yet while up to 60 per cent of garment workers are women in largely junior positions such as seamstresses, the majority of senior management positions are taken by men.

Experts attribute this to female garment workers having lower education qualifications than their male counterparts. Many also come from poor rural areas and may have had to quit school and take on a factory job to support their families.

Located in Bangladesh’s port city of Chittagong, the AUW opened its doors in 2008, offering free degree courses to bright young women from disadvantaged households across Asia and the Middle East.

The university, funded by donors including the IKEA Foundation, has 500 students pursuing Bachelor degrees in subjects such as economics, public health, philosophy, environmental science and politics.

In January, the AUW went one step further, introducing its first ever degree programme designed for women garment workers.

“We wanted to give opportunities to female garment workers who are academically promising, but could not manage to study further due to poverty and the need to the earn an income,” said Mowmita Basak, co-ordinator for the Pathways programme.

“The 22 garment workers selected receive a full scholarship for the five-year-long course. But the unique part is their employers will continue to pay their salaries, even though there is no guarantee the worker will return after graduation.”

Retaining the workers’ monthly wage of around US$100 is key to the success of the programme, Basak added, as their families rely on the income and may refuse them permission to study if there is a risk they will face financial hardships.

Even so, the course has been a “hard sell”, said Basak. Last year she visited numerous factories to try to convince employers to release their brightest female workers for a five year period — on full pay.

“I tell employers it will help repair the international reputation of Bangladesh’s garment sector which was been damaged after the Rana Plaza accident, and it may even generate some positive publicity for their factories,” she said.

Rubana Haq, managing director of the Dhaka-based Mohammadi group, which employs 9,000 workers and manufactures apparel for the H&M brand, said it was time for Bangladesh to do good.

“I think that going forward, it’s going to be worthwhile to try and attempt to change the lives of the female workers. I always used to wonder whether our women had any hopes or dreams beyond their sewing lines,” said Haq.

“So when some of the women raised their hands and expressed their willingness to be tested, I was pleasantly surprised and extremely happy.”

For some of the young garment workers, selected by AUW after passing a rigorous examination, the opportunity to pursue a Bachelor’s degree has been more than just a dream come true.

“I always wanted to study more, but I couldn’t. My parents are old and I have two young sisters, so I am the only one who can earn in the family,” said Sonia Gomes, 28, a former quality control inspector at a factory owned by the Ananta group.

“I had given up hope until I heard about the AUW programme. I was so happy when I was selected. I expect it will change my life. I plan to become a businesswoman and collaborate with other garment workers to ensure their rights are respected.” — Thomson Reuters Foundation