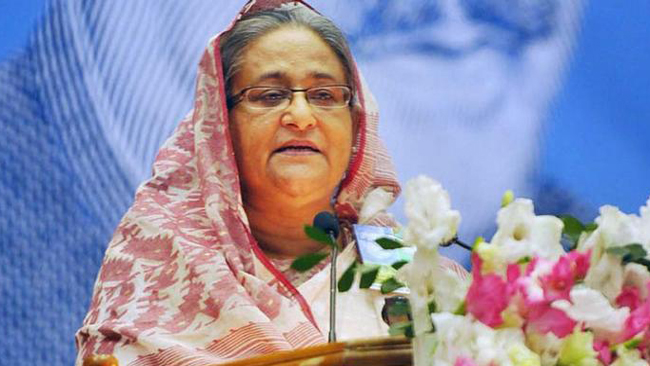 Prime Minister Sheikh Hasina has once again expressed her resolve to give the country’s poor and meritorious students more access to education as part of her government’s policy in line with the philosophy of the Father of the Nation Bangabandhu Sheikh Mujibur Rahman.
As daughter Sheikh Hasina is committed to implement Bangabandhu’s dreams in all sectors of development and welfare, including education. Now a bigger stress is being given to not only formal education to the poor and meritorious boys and girls but also to vocational and technical education.
The PM’s mission to bring welfare to the poor children and their families is a well known concept that has been appreciated widely – though sometimes dented by a lack of implementation of her policies by her government.
Her fresh directive for education of the poor is a further reflection of her love and care for them and speaks for her vision for making Bangladesh a developed and progressive country in the coming years.
Education indeed has excelled in Bangladesh during Sheikh Hasina’s rule with unprecedented high scores in all examinations from primary level to the universities. But often the best opportunities are not available to the poor and the education sector has now become more expensives .
Education in Bangladesh, especially in privately run schools, colleges and universities is extremely expensive that majority of parents are unable to afford. On the other hand, standard of education in public institutions is still very low, though the government is trying to improve it.
Many parents in the villages still want their boys to help them in agriculture and other income generating activities while their mothers find it hard to ensure security to their growing daughters and sometimes to feed them. As a result, child marriage still prevails in our country though it is a punishable offence.
Sheikh Hasina’s stress on education of the poor will break the barrier, at least to some extent, and show light to the under privileged section of our society. We all should thank the Prime Minister for her yet another noble gesture.
The PM mentioned that Bangladesh is now a food sufficient country as we produce enough food grains to feed the country’s 160 million people. The government has promised food security for every people and is working to achieve that end.
But, to ensure three meals for every people each day, we need to plug some loopholes. Fact remains that not all the households are sufficient in food, many still remain half fed. This is not because of faulty policy of the government but for corruption and irregularities in the food management and distribution. Land owning is also a problem as most of the farm lands are in the hands of few people.
When people will have something to fill their stomachs they will send their children to schools and not pull them back to work for supplementing family income. Prime Minister Sheikh Hasina, who has been lauded at home and abroad for her strong policies and firm determination to implement them, has already led Bangladesh to the threshold of becoming a middle income country in next few years.
We wish and hope her dream – which she inherited from her father Bangabandhu – will come true and the people of Bangladesh will have a peaceful and prosperous future – See more at: http://www.observerbd.com/2016/04/24/148229.php#sthash.TSviGIij.dpuf

Bangladesh now a destination for Chinese trade and investment